Tell Me When: A Review 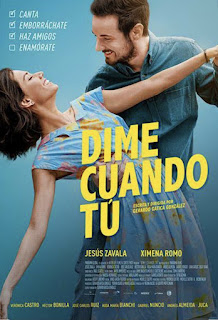 TELL ME WHEN (DIME CUANDO TU)

I will grant that the circumstances under which I saw Tell Me When (Dime Cuando Tu)* may have colored my views on the film, but I think I would have reached my conclusions regardless.

Guillermo or Will (Jesus Zavala) is a Mexican-American, too busy wrapped up in his career to notice either life or his heritage. After his beloved grandfather (Jose Carlos Ruiz) drops dead, Will finds the notebook he had written for his grandson. Here, he advises Will to revisit his roots by going to Mexico City and explore the sights and sounds of the vibrant capital.

While there, Will finds that "Daniel", his grandmother's friend's grandson, is really "Danielle" (Ximena Romo), an aspiring actress who curiously mistakes being the understudy to Mexican actress Ludwika Paleta** as "making it". Fortunately, a car accident renders Paleta totally incapable of taking the stage, clearing the way for Dani. Will, encouraged by Dani's requisite gay best friend Beto (Gabriel Nuncio), attempts to form a romantic relationship with the upbeat Dani, resulting in one kiss.

However, Dani sees that they are not meant for each other, leading Will to feel inadequate and depressed. Reluctantly returning to Los Angeles, it takes a lot of work from Beto and Will's family to get him back to Dani, where he is willing to be with her be it as lover or friend. 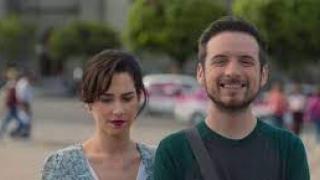 My cousin, celebrating her birthday, insisted on having us see Tell Me When as part of an outdoor Netflix screening. It was about nine thirty and I wanted to go home, but one doesn't walk out on family. As such, I endured a movie whose plot was so painfully obvious it is a wonder that anyone could think any of this was clever, let alone good. Writer/director Gerardo Gatica Gonzalez had several sketches for a story, but never brought them together into anything worth the surprisingly lengthy 95 minutes.

Zavala's character was dull, so I cut him some slack, but Will was not interesting to begin with. Truth be told, for a movie filled with clichés (no woman apparently is without a gay best friend), his character never grew. Instead, he just hit the expected beats without earning our interest. I put it down to Gonzalez's script, which not only gives Will/Guillermo (both are translations of the other) nothing to do but never decides if he's merely sheltered or a blithering idiot.

One scene has him "mugged" by perhaps the gentlest pair of ruffians, who take his wallet after removing a pair of blinking sunglasses he literally wears both at night and while walking back to the apartment. A girlish scream is enough to make him flee in terror. I figure this is funny to Gonzalez, but it just comes across as third-rate sitcom. Another odd scene is when Will joins a mariachi group in an impromptu performance. The other restaurant patrons appear unsure if this man is merely drunk or flat-out bonkers, but once he orders drinks for everyone on him, there is a pause before they all applaud. 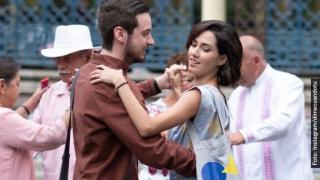 For a film whose message is to "find life", Tell Me When doesn't find anything. Again and again, Gonzalez flirts with ideas only to drop them, refusing to follow through. One moment a raincloud seems to fall only on him, suggesting a slightly surreal film, but that disappears quickly. Dani's former flame appears but that too doesn't add anything to the story.

Faring much better is Zapata's other costar Romo, who gives Dani something of a character (although the idea that Will's family friend would not make clear that Daniel is really a woman stretches believability). She too was hampered by Gonzalez's script, which at times shifted from making her something of an idiot (an actress would or should know being an understudy is not the same as getting the starring role) to making her a wise woman.

To be fair, Tell Me When does have an excellent soundtrack, blending everything from Patsy Cline's Crazy to Juan Gabriel's Querida (which has the line "Dime cuando tu"). Anyone who grew up listening to Spanish-language performers like Napoleon or Daniela Romo would appreciate the music.

Credit should also be given to some of the supporting actors like Veronica Castro as Will's grandmother and Hector Bonilla as her lifelong friend Juancho for bringing life to characters more interesting than Will or even Dani.

Makes one wish the film had focused on them instead.

I love my family, but given that my cousin and I have diametrically opposed views on politics, religion and film (which we respect, leading us to have never had a single fight between us), why she would think I would enjoy Tell Me When is puzzling. To each his/her own, but the only thing I'd ask anyone to tell me is to Tell Me When it's over.

** While I understand that "Paleta" is her actual Polish surname, it can also mean "Popsicle" in Spanish, which made the Polish-Mexican name "Ludwika Paleta" very curious to my younger eyes and ears.