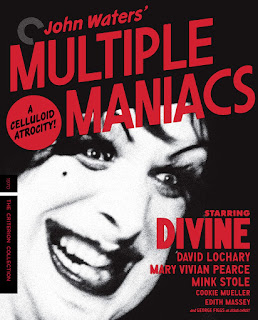 Despite his best-known film Hairspray being seen as a tween party film, John Waters has always reveled in the tawdry, tacky and flat-out weird. Multiple Maniacs gleefully bills itself as "a celluloid travesty" and is unapologetic about its idiosyncrasies and idiocies. In turns dumb and funny, Multiple Maniacs is fully aware of itself, though not exactly what I would consider great cinema.

Lady Divine's Cavalcade of Perversion presents itself as a traveling freak show but is really just a front to rob unsuspecting rubes roped into seeing the various freaks and perverts. Headed by Lady Divine (Divine), she has developed a blood lust, itching from just robbing to killing people.

Her current lover Mr. David (David Lochary) wants out of Lady Divine's life to move into the newer, younger Bonnie (Mary Vivian Pierce). Lady Divine too is tiring of Mr. David, but their criminal life binds them together. The only thing Lady Divine cares for is her hooker daughter Cookie (Cookie Mueller), with whom they are staying.

Suspecting Mr. David is fooling around, Lady Divine goes in search of them to kill them both. She however is raped by drugged-out men in dresses, leading a shocked Lady Divine to have visions of the Infant of Prague leading her to a church. Here, rather than finding salvation, she finds lesbianism in the form of Mink the Religious Whore (Mink Stole), who sodomizes Lady Divine with her rosary.

Now joining forces, they seek out Mr. David and Bonnie, a meeting that will end with many dead. Lady Divine not only cannibalizes Mr. David but ends up raped again, this time by a giant lobster named Lobstora. This sends Lady Divine into such a murderous frenzy that only the National Guard can stop her crazed destruction Godzilla-style. 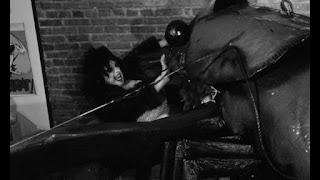 Multiple Maniacs exists in a world where people can be raped by giant lobsters because, why not? In John Waters' world, giant lobsters popping out of nowhere to rape drag queens is not only logical but almost expected.

It is clear that this is a movie that is less directed by John Waters as it is shot by him. The acting is the height (or depth) of amateurish: some actors clearly flubbed their lines but managed to get through things, and in the infamous Lobstora sequence you can clearly see Divine using the shocked screams as a way to stop his wig from falling off. Some, like barmaid Edith (Edith Massey) clearly couldn't act, their failed efforts to try however become mesmerizing. It's like watching an out-of-control train skipping along the tracks but somehow managing to hold on to its path.

As Multiple Maniacs is openly too silly to believe, it frees the viewer from taking any of this seriously. We know this is campy to the extreme, so we can watch in sometimes unsuppressed laughter, sometimes in puzzlement, and sometimes in disbelief.

Take for example Lady Divine's last rampage. As Mars, the Bringer of War plays on, this gigantic glamor-than-glam force known as drag performer Divine stops in frenzied glee, aware of the lunacy of it all. Certainly the crowds fleeing in terror weren't taking this seriously, and we know logic plays no part in Multiple Maniacs. After all, how is it that the same blind beggar keeps showing up as Lady Divine storms her way across Baltimore?

Multiple Maniacs is clearly made for people who find either humor or enjoyment in seeing Divine's naked ass thrust at you. As for the infamous sodomy-by-rosary scene, as I'm not Catholic I can't work up outrage or horror. I can imagine that for Waters, whose background is Catholic, this was a firm thumb-up-the-nose at the faith. It is tasteless, but that's Waters' forte.

Multiple Maniacs is a film put together by people who just wanted to make a film. If you see it that way, I can see why so many enjoy the trashiness of it all. It isn't a film for me, but as I did laugh at it I guess it works.