When a Woman Ascends the Stairs: A Review 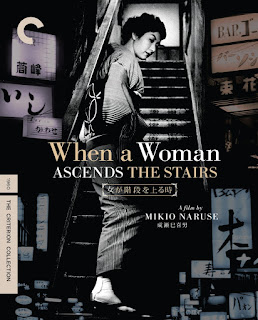 WHEN A WOMAN ASCENDS THE STAIRS

The transition from Imperial to modern Japan forced many changes. The role and position of women, however, was not one of them. When A Woman Ascends the Stairs chronicles the struggle and sadness behind the smiling faces of women who entertain men.

In post-war Japan the widow Keiko (Hideko Takamine) works as a bar hostess at the Lilac Bar. Mama as the other, younger hostesses call her, maintains her dignity while struggling financially despite having wealthy patrons. She wants to open her own bar, but simply has no money for such a thing.

Her former colleague Yuri (Keiko Awaji) has opened her own place, drawing customers away from the Lilac. Outwardly happy, she too is struggling financially. Keiko may entertain the men, but she won't sleep with them. She also hates going up the stairs to the bars she works at, finding that she can't fake it until she makes it.

In a shocking turn, Yuri commits suicide, though it is unclear whether she meant to or merely misjudged a fake attempt to keep her creditors at bay and accidentally killed herself. For once, Keiko can't go through the façade of the joyful geisha-like figure and berates the man who sent the bill collector to Yuri's grieving mother. Her manager Komatsu (Tatsuya Nakadai), who harbors love for Keiko, insists she do her job.

Illness, however, along with anger, prevent her, at least temporarily. After finally sleeping with a client who won't leave his wife, Keiko turns down Komatsu's proposal and ultimate ascends the stairs, presenting a happy face to new clients. 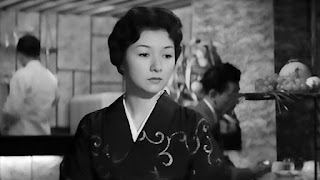 When A Woman Ascends the Stairs is a sharp critique of gender roles in Japanese society, one where women must put on a happy face to men who may or may not care for them in order to survive. The men are interested almost wholly in being catered to and entertained, but the private struggles of the women is of little importance.

Even Komatsu, perhaps the most sympathetic of the men, isn't above having sex with Junko (Reiko Dan), another bar hostess whom Keiko serves as unofficial mentor in the demimonde of neo-geisha. He sleeps with her to get information about Keiko, even though Junko sees him in a more romantic light. Naïve and upbeat, Junko wants a marriage but doesn't seem to mind being a hostess if it leads to a wealthy husband. Even a single tryst with Komatsu will make her happy.

It won't make Keiko happy though, and When A Woman Ascends the Stairs succeeds because of Hideko Takamine. Her performance is extraordinary, eliciting sympathy and strength in equal turns. Takamine does not make Keiko a victim but it also does not glorify her as a feminist. Instead, she makes Keiko a survivor, who cares about her fellow bar hostesses but who keeps a rich but private world separate from her work. Her performance is pitch-perfect, from when she denies a true story of her placing a love letter in her late husband's urn to telling off the man who drove Yuri to suicide (intentional or not). 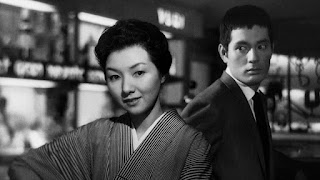 Keiko is a strong woman, who has dreams but also private pains. You want her to succeed, but whether her last moment where she "happily" greets clients is a triumph or a fall is up to the viewer. Despite whatever life throws at her, she maintains her own honor and pride. "I love you but I prefer a husband," she tells her potential benefactor, showing she can't be bought even by what was intended as an act of kindness; when she returns his stock certificates at the train station with his wife present.

Though a smaller role, Nakadai supports Takamine as Komatsu, the man who privately loves her but who cannot bring himself to say it out loud until it is too late. He carries this torch but also has created a false goddess, idolizing her in a way that is just as regressive as the men Keiko entertains. Reprimanding her for her behavior towards the sleazy businessman, he makes clear what her role is. "You get paid to show men a good time. If you don't like it, take off that kimono and work in an office and starve", he snaps.

Whether he says this as a way to cover his own pain about her not seeing his ardor for her or because she in a way is business one doesn't know, but it makes Komatsu's struggle all the harder.

The film also has a surprisingly light and smooth jazz score, perhaps reflecting the outwardly upbeat but privately hard world it takes place in.

When A Woman Ascends the Stairs feels longer than it is and I wasn't big on Keiko's sporadic voiceover, but those are minor points. It's a well-acted film about how those smiles we get may not be anything more than a graceful performance, an artifice to keep body and soul together.