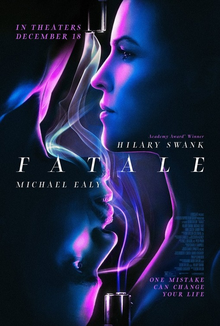 It takes a certain amount of courage to try and make a clearly psychopathic murderess the heroine of a film. Fatale tries, bungles it in at times hilarious ways, but bless it for trying.

Successful sports agent Derrick Tyler (Michael Ealy) worries his wife Tracie (Damaris Lewis) is fooling around. Therefore, it seems almost rational that he has a one-night stand in Las Vegas with Val (Hillary Swank). Val enjoys the fling to where she forces him to go another round so he can get his cell phone, which she's locked in the hotel safe.

If that already doesn't scream "psycho", I don't know what does.

So after this indiscretion Derrick attempts to work on the marriage and it looks like things are going well, until an intruder comes and nearly kills him. The lead investigator is none other than Val, displeased to find "Darren from Seattle" is neither.

Now Derrick has to deal with both the attempt on his life and a woman scorned. As if to add to his troubles there's the fact that Tracie is indeed having an affair, with none other than Derrick's business partner Rafe (Mike Colter), a relationship Val is more than happy to reveal. Is it to warn him that Rafe and Tracie were the ones who tried to kill Derrick off? Is it to get Derrick to help her get custody of the daughter she permanently disabled when she was an alcoholic? Is it not just to help her get custody of said daughter but to get rid of her ex, District Attorney Carter Haywood (Danny Pino)?

As bodies keep piling up and more people get involved in the myriad of crimes, Derrick has to use all his wits to save himself from being framed and from Val's increasingly whacked-out schemes.

Fatale is so close to a "so bad it's good" film, one that could have embraced its loonyness and been so much camp. It, to be fair, could also have decided to take things seriously and be the psychological thriller it aimed at.

Instead, Fatale decided to tie itself into knots by becoming totally unhinged if not irrational, not unlike Val.  David Loughry's screenplay attempted to make Val sympathetic through her efforts to get back her daughter, but trying to force Derrick to reenact a weird version of Strangers on a Train is an odd way of doing it.

If I understand things correct, Tracie and Rafe hired a hitman to ice Derrick, but Val decided to kill them both so that Derrick could then kill Cole, thus granting her sole custody. Add to that the idea that a police detective could keep working when she has a restraining order against her from the District Attorney, who is himself embroiled in some kind of scandal. Guess if Cole's killed, his current wife has no rights to her stepdaughter against a woman who caused said daughter's paralysis and who is certifiably bonkers?

Yes, it's a bit muddled, but Fatale decides it needs to go all over the place just to go somewhere.

Fatale in many ways is an unintentional comedy. From when Derrick discovers Tracie and Rafe are humping around to when Derrick's cousin Tyrin (Tyrin Turner) and his fellow hitman Bumpy (Compton Menace) get blown away, these scenes elicited howls of laughter from me.

Perhaps it isn't surprising how badly Fatale plays, as director Deon Taylor apparently told everyone to look bored. I generally like Ealy and Swank, but Fatale is among their worst performances. Everyone bar none looks so blank, so empty, almost forcing the words to come out with no sense of conviction or even apparently interest. No matter what happened, or what really crazy turns the plot took, everyone in Fatale acted as if they were aware how awful it all was and weren't about to bother trying to make it realistic.

In retrospect, I'm going to walk this back slightly. Pino had one mode: perpetual anger. Even when Derrick comes to try and tell him of a plan he has to catch Val in her own trap, Cole is simply too triggered by Val's name to show an inch of common sense.

I said to myself, "Derrick, report her psycho ass to her superiors" and if he had he would have spared himself so much misery. However, you can count on people in films to do the dumbest thing possible to keep the story rolling, logic be damned.

I can't say I hated Fatale or that it isn't worth the time to see if there isn't anything else. I can say that Fatale is poorly acted and poorly written, a case of the two going together. "I don't go after something unless I know I can get it," Val tells Tracie and Derrick when she first arrives to lead the break-in investigation. Subtle Fatale is not, but in the right mood it can find a future as less psychological thriller and more camp comedy.