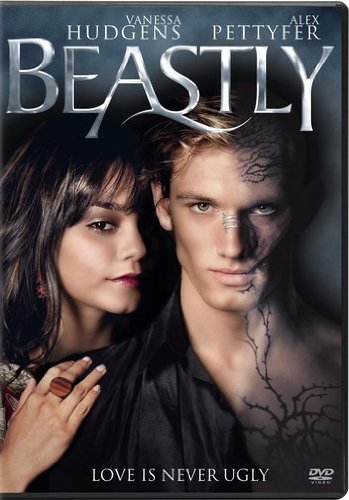 The Face of Love is an Ugly Thing...

If there is something good to say about Beastly, it is that is that the story made a good effort to update the fable of Beauty and the Beast.   For that, I can't fault it.

For everything else, I can.

Since Beastly is an update of Beauty and the Beast (based on the young adult book by Alex Flinn), we pretty much know the story.  Kyle (Alex Pettyfer) is a rich and arrogant young man, breathtakingly beautiful on the outside but a rotten person on the inside.  His narcissism and vanity irritate fellow classmate Kendra (Mary-Kate Olsen) while merely puzzling another classmate, Lindy (Vanessa Hudgens).

Kyle, however, doesn't have it all perfect: his father Rob (Peter Krause) is a prime-time anchor perhaps even more narcissistic than Kyle with whom he doesn't have the best of relations.  After Kyle humiliates Kendra, she puts a curse on him, turning him into a revolting-looking man.  If he does not find someone to love him for himself, beyond his appearance, he will be cursed to look like that forever.

The shame of it forces him to hide, and his father opts to put him up in a lavish penthouse and as far away from people (and himself) as possible.  Kyle's only companions are Jamaican housekeeper Zola (Linda Gay Hamilton) and tutor Will (Neil Patrick Harris), who is conveniently blind.

Kyle soon starts stalking Lindy, since she was the only one to show him any kindness.  Plot contrivances bring them together: her father is involved with some shady business, and after Kyle's actions lead to the thug's brother's death, Lindy has to stay with Kyle for her own protection. She at first wants to stay with her father, but eventually settles in.  She gets to know Kyle, calling himself 'Hunter' and a friendship develops.

Eventually, Kyle falls in love with Lindy, but plot contrivances force her to leave.  Kyle, no longer caring about his appearance, goes to Lindy before she leaves for Machu Picchu, and they confess their love.  Right on time: not only is he restored to the gorgeous young man he was before, but Zola magically gets green cards for her children to come to America and Will gains his sight.

I suppose Beastly could have been a bit of harmless fun, except that we get such awful performances and a weak and rushed script from writer/director Daniel Barnz.  All we have to do is look at our two leads to see where Beastly went wrong.

Pettyfer and Hudgens are so stiff and forced and unnatural throughout the film.  Again and again, every time they were on screen together they not only looked uncomfortable but they make audiences uncomfortable.

There was an effort to make Kyle slightly sympathetic through his relationship or lack thereof with his father, but these efforts fell flat not just because we don't see them spend much time together but because especially Pettyfer was never able to express any emotion whatsoever.  Surprisingly, Krause, whom I consider a competent actor, couldn't express any emotion either.

Hudgens did herself no favors in Beastly either.  She was thoroughly expressionless throughout the film.  It was actually painful to watch Hudgens and Pettyfer not act.  Olsen, who looked like she was channeling Helena Bonham Carter through her wardrobe, was not threatening but almost comical in her witchcraft.

In fact, the only real performance was from Harris, but he had the benefit of being a bit of the comic relief.  Will was the only character who was allowed any sense of fun, always ready with a witty remark on the situations.  I think this may be one of the reasons why Beastly just did not work: there was simply just too much effort in trying to make things romantic when the end result was really lifeless.

And it wasn't just the performances that were lifeless and dull; the story itself, despite being one people would be familiar, was so sluggish with neither the urgency of Kyle's situation or the relationship between Lindy and Kyle being of enough interest for us to care whether either would be resolved.

I'd also like to point out a few things that displeased me.  For example, on Halloween when Kyle's appearance wouldn't appear odd, we're suppose to believe that his ex-girlfriend Sloan (Dakota Johnson) would recognize Kyle's voice but Lindy wouldn't?

Finally, some of the sets looked just like sets: whatever magic one could have had with the supernatural/romantic elements in Beastly were utterly lost.

The biggest failure of Beastly was to have two leads that were not compelling, not interesting, and sadly, not acting.  Hudgens may yet be an actress (I certainly thought she did a good job in the High School Musical films), while Pettyfer has yet to be good in anything (granted, I've only seen him in I Am Number Four--and in both films he was very dull, lethargic, and flat).  If anything went wrong with Beastly, the fault lies on their beautiful shoulders.

Beastly isn't an ugly film, just a boring one.  It is so boring even the leads didn't show any interest, and in the end, no one else really will.

Email ThisBlogThis!Share to TwitterShare to FacebookShare to Pinterest
Labels: 2011, Review, Romance, YA Adaptations