30 Minutes Or Less: A Review

I can't say for certain whether the writers of 30 Minutes or Less were aware of a true-life horror that bears a striking similarity to the plot of the film.  However, the similarity between this film and the strange tale of Brian Wells are so eerie that I thought 30 Minutes or Less was at least 'inspired' by Wells' story.

These similarities and the controversy that has erupted have been marked on by others.  Whether those behind 30 Minutes or Less knew about Wells and used it for their story I do not know. However, it is a surprise to me that the plot of 30 Minutes or Less is supposed to be an original idea.

Not having seen Eastbound & Low, I cannot vouch for the comedic genius of Danny McBride (and after having seen Your Highness, I still can't vouch for it).
Not having seen Parks & Recreation, I cannot vouch for the comedic genius of Aziz Ansari (though I can say that in almost every picture I've seen of him, he bears the exact same facial expression).  I did see some of his stand-up on YouTube and again, I can't vouch for the title 'genius'.  Having seen  The Social Network, I insist he was doing another "Jesse Eisenberg" type (the eternally frustrated nebbish--albeit an angry, bitter one).   In short, I'm out of step with current thought that bestows greatness on this collection of twenty year olds, finding nothing 'genius' in them.

The three of them, along with Nick Swardson (who has never had the word 'genius' slung at him) are at the core of 30 Minutes or Less, a dull, unhappy film that attempts to pass itself off as a comedy, despite a total lack of humor but a healthy dose of mean-spirited people doing unfunny things almost begging us to find humor in racial stereotypes and threats of violence.

Dwayne (McBride) and his buddy Travis (Swardson) are dim slobs who to say the least, suffer from an extreme case of arrested development.  Dwayne's father, the Major (Fred Ward) won the lottery a few years back, but he has the temerity to spend the money the way he'd like to rather than give it to his son.

At a strip joint, Dwayne tells his stripper Juicy (Bianca Kajlich) how he'd like to have his father dead.  No worries, our fair maid says; she knows someone who'll do it for $100,000.  Dwayne doesn't have $100,000 (something about not having a job, living off his father, and using whatever money he does have on strippers, pot, and guns).  What better solution is there to rob a bank to get the cash to kill the father and get the inheritance, right?

At this point, I'd like to stop and say, why not just get the $100,000 by either promising said hitman the money postmortem or at least a down payment, which could be financed by selling off one of the Major's many vehicles?  Maybe in the brief time between sale and murder, the Major wouldn't notice it missing.  Just a thought. 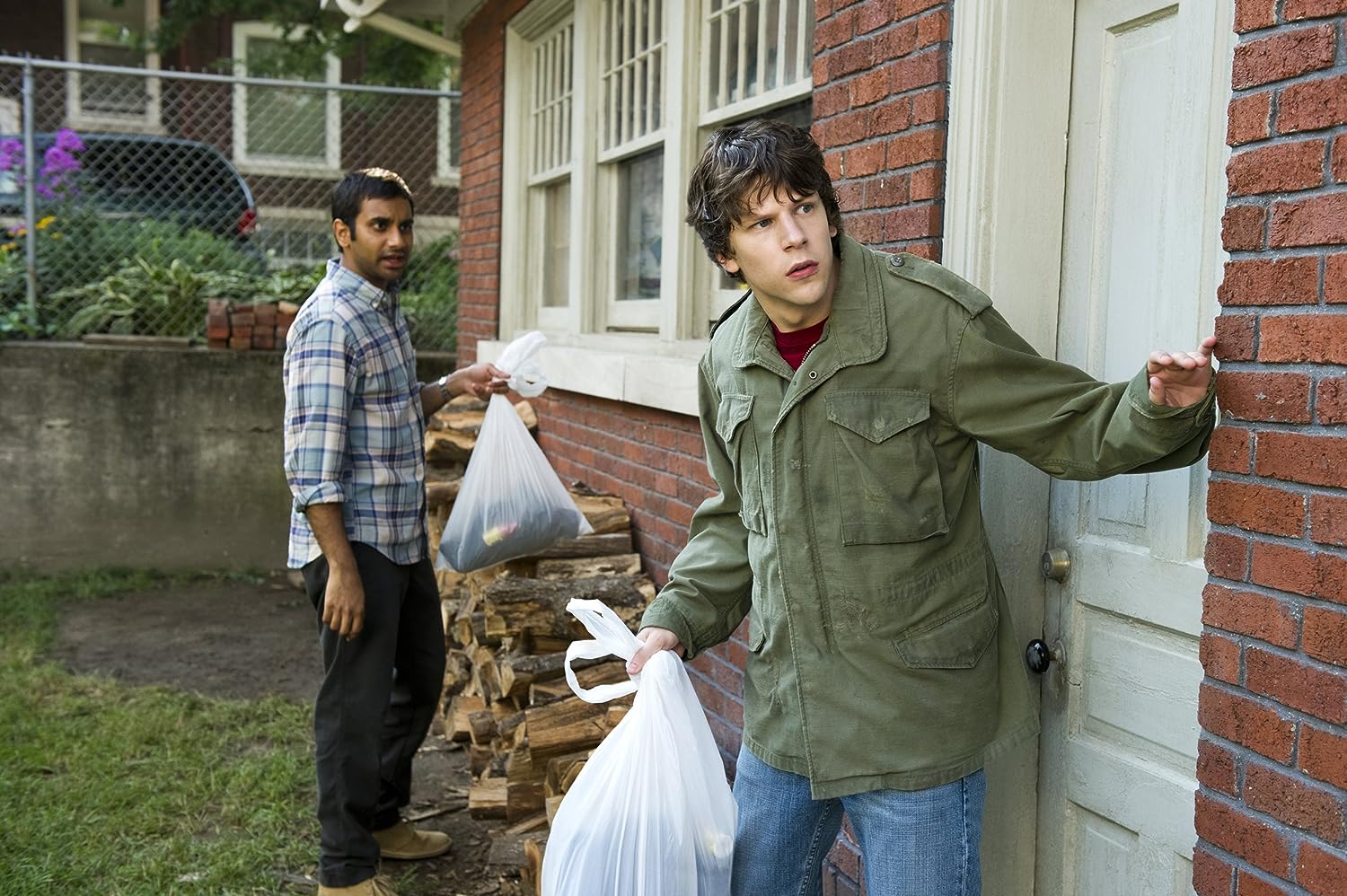 In any case, Dwayne and Travis decide that they shouldn't rob the bank, but get someone else to do it.  Of course, it would be against their will, and the person they select is Nick (Eisenberg), a pizza delivery boy.  At least, boy in the mental sense: Nick has no real ambitions, no goals, just to get drunk, get high, and get laid.

Given how similar Nick is to Dwayne and Travis, it's surprising how they have never met.

The one girl Nick does really like is Kate (Dilshad Vadsaria), who is going to leave their one-horse town for a training/job in Atlanta.  Kate, unfortunately, is the sister of his best friend Chet (Ansari), but because Nick had the idea of telling Chet that Nick's one-night stand at graduation where he took a girl's virginity was really Kate, they had a falling out.

Whether Nick should still hold some resentment for Chet having told other's about the affair Nick's mom had with a lifeguard that broke up their marriage I leave to you.

Well, Dwayne and Travis lure Nick with a pizza delivery and once he awakens he finds himself strapped with a bomb that will go off if he fails to complete his mission.  With time running out, Nick gets Chet to help him rob a bank, but after Nick discovers that the hit man Chango (Michael Peña) doesn't have the code to free Nick, he and Chet escape and then there is the final confrontation between all of them.

Again, one can only guess whether 30 Minutes or Less was actually based on or at the very least inspired by the Wells case, but either way the story itself  has too much darkness to be a comedy but too many attempts at humor to be a crime drama.  Let's leave aside for the moment the similarity between the Wells case and the script by Michael Dileberti (from a story by Diliberti and Matthew Sullivan).  Instead, let's pretend that 30 Minutes or Less is completely original, no basis in truth, just judge it on its own merits.

It doesn't have any.

A lot of the 'comedy' comes from distractions to the main plot of the story, and actually come from doing violence to characters both major and minor.  Director Ruben Fleischer couldn't find a balance in 30 Minutes or Less: comedy that was forced and unfunny with a situation where levity would be in short supply.

Take when Nick and Chet are about to rob the bank; they spend too much time trying to figure out 'cool criminal names' for each other.  How surprising and 'clever' they came up with Hispanic names.  After all, who'd think Hispanics could be criminals, right?  This shows us that they are not taking what should be a deadly-serious situation seriously: after all, Nick does have a bomb strapped to him.

When during the robbery they inadvertently cause a little girl to accidentally shoot a customer, we're led to believe this is funny rather than painful.  If it isn't bad enough the poor man is writhing in pain due to the bullet, he's offered some stolen money from the bag only to have dye splash into his eye.  Somehow, seeing someone we've never met suffer so much physical pain through no fault of his own doesn't strike me as funny, but sad.

We already have two loathsome men in the film; one is a complete wastrel and self-entitled adult child, the other his dim except for making bombs buddy. Here they plan out a murder because the wastrel's short-tempered cliched military father has the nerve to tell him to grow up, and that doesn't compel one to either care about the father (who is not interesting or on screen long enough to serve as nothing more than the plot device) or the dunderhead criminals.  Perhaps we can accept that we're not suppose to care about them.

What 30 Minutes or Less can't do, shouldn't do but did was give us protagonists that we don't care about either.  I'm going to guess that Ansari comes from a worldview where seeing people get blow jobs and having at least one swear word per sentence is somehow funny.  It isn't.  This is how Chet is introduced to us. I think this is a good enough place to pause and look at the performances.

I didn't see a difference between The Social Network Eisenberg and 30 Minutes or Less Eisenberg, therefore, I think he either should have been praised for both or condemned for both, not instead have a split decision for doing the same thing in two different films.

Ansari's whole turn as Chet was just to raise his voice and move his hands as if he were taxiing in an airplane.  Every scene between Ansari and Eisenberg appeared so forced in their attempts to be either funny (as when they are fighting) or tender (as when they apologize to each other).  Even stranger, despite what would be the urgency of the situation we don't ever get a sense that anything about the circumstances they are facing are all that serious.  You have a bomb strapped to you, and a lot of time is spent in this short film putting in a love angle between Nick and Kate?

Perhaps McBride suffers from his reputation, but while watching 30 Minutes or Less I actually did speculate whether he was actually high in his scenes.  There was something to his eyes looked but again, it may be because his primary shtick is high pot use.  If he were high, it would at least explain why he thought the movie was funny.

Although most attempts by the script at some form of wit fell flat (having Nick say he isn't on Facebook is a good, or poor, example), there actually were moments that I though were slightly smart.  The stereotype known as Chango had two moments of wit despite giving in to the 'Hispanic as thug' routine: just the name Chango (Spanish for monkey) is clever if we remember that Dwayne and Travis dress up like monkeys to hide their identity, and Chango calling himself a "Satanic Hispanic" did make me chuckle.

30 Minutes or Less is a piece of junk: unfunny given the situation, with characters you don't care about, who appear to want to waste your time, a meandering plot, and just really, really unfunny for a comedy.