I Melt With You: A Review

I MELT WITH  YOU 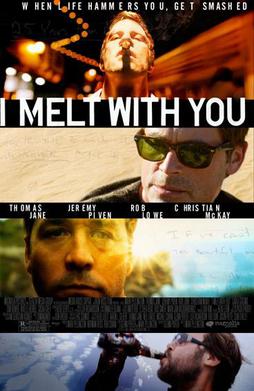 I've Seen The Difference And It Only Gets Worse...

It was Henry David Thoreau who wrote about how most men lead lives of quiet desperation.  Not so Richard, Jonathan, Ron, and Tim/Timmy, the four main characters in I Melt With You.  These guys can't apparently shut up about their empty lives.

That in itself would be irritating if not intolerable.  What makes it all even worse is that the only way to get them to shut up about their failed lives is for them to actually die one by one.  It can be said that few films aspire to so much and fail so spectacularly as I Melt With You, a movie that shifts in tone from inner desperation to psychotic.

Richard (Thomas Jane), Jonathan (Rob Lowe), Ron (Jeremy Piven) are all reuniting in a beach house, ostensibly to celebrate the birthday of Tim (Christian McCay), which from what they say is an annual reunion.  However, this birthday is a milestone: Tim turns 44.

How is 44 a milestone, you may ask.  Well, that would mean that it's not only these four entering middle-age, but it marks 25 years since they all met at college.  If one keeps count, that means the four of them became friends at 19; all this is important to the story, so be patient.

Each of them comes heavy with emotional burden.  Richard is a writer who has been reduced to teaching English (shades of Miles from Sideways).  Jonathan is a doctor who has become a pill-pusher for bored Real Housewives-types and whose son looks to the stepfather as "Dad".  Ron is relatively-happily married but as a trader has gotten into shifty business dealings.  Tim has yet to recover from the loss of his sister and boyfriend in a car accident he was responsible for.

During this week, our gruesome foursome do nothing but indulge in heavy amounts of drinking and drugs both prescription and illegal while waxing philosophical thoughts about how miserable their lives are.  It's only after Day Four of this Week in Hell, where the still-hot Richard managed to get some girls and boys for a drug-enhanced party, that we have a particularly nasty turn of events: Timmy, the most emotionally unstable of the four (which is saying quite a lot given how all of them are so screwed up), hangs himself in the shower.  That, I imagine, would ruin this drug-fueled indulgence in adolescent behavior. 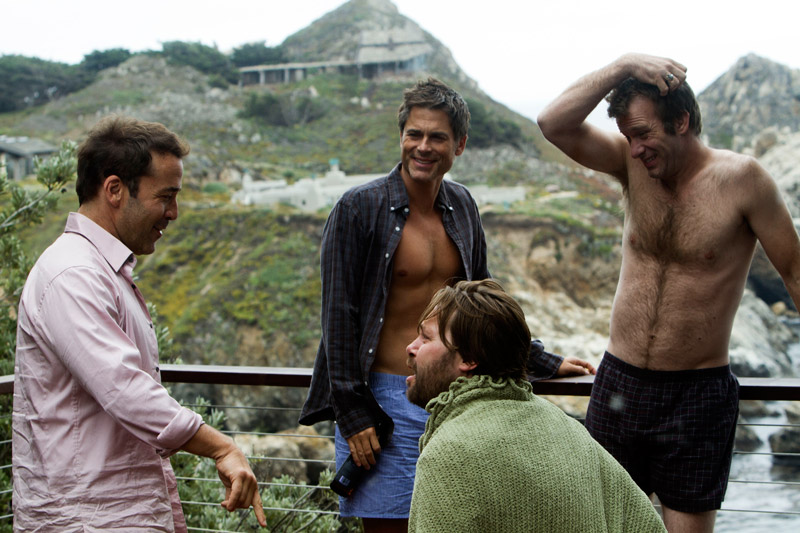 At this point, I Melt With You becomes totally unmanageable.  It appears that twenty-five years ago, at age 19, these four made some sort of suicide pact where if their lives were horrible twenty-five years from then, they would kill themselves.  Well, it's been twenty-five years since their literal blood-oath, so, one by one they have their Final Exit.

A bar fight brings the attention of Officer Boyde (Carla Gugino), who stares at the surviving men blankly as one by one they tell her unconvincing things in an unconvincing way.  At last, this Week of Hell ends, for these four guys, and for the audience.

After I finished I Melt With You, I truly was amazed that given the copious amounts of pills, drugs, and booze these guys consumed that they hadn't dropped dead by the time we got around to the suicide pact.  I could say that is where part of the problem lies with I Melt With You, but that would be short-changing what is one of the most misguided films and one of the most unpleasant experiences in film-viewing all year.

We can start with the story itself courtesy of screenwriter Glenn Porter.  We know these guys are terribly unhappy from the get-go, but we never get an idea as to why this particular week would have them disintegrate so massively and/or quickly.  From what we understand, they do this every year except for the killing themselves part, so I imagine that every year for perhaps twenty-some-odd years they go, get high, get drunk, then part ways, yet go on about their miserable lives.

One truly wonders if Porter thought that after one of them kills himself, there would even be a debate about whether to call the police (for the record, they didn't).  Instead, we're really suppose to accept that these three adults would seriously go through with a death-pact made when they knew nothing about life. 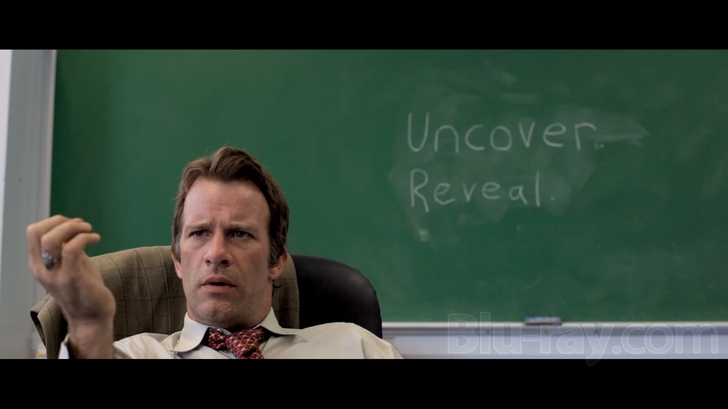 I digress to say that whenever I reunite with any of my high school or college friends, we may have a bit more to drink than we should, but by and large we actually take time to catch up on each others lives, not to commiserate on how awful our lives are.  In I Melt With You, it never comes off as anything other than self-absorbed whining.  These guys drown in their own self-centered 'woe is me' thinking that they soon become thoroughly annoying.  Frankly, it's not a good thing when you are cheering when a character dies.

I further digress to point out that in one case, it was more murder and a particularly gruesome one at that.

The script also goes the heavy-handed route with the metaphors.  On Day 3, a wise old fisherman talks to Timmy about his late wife and the love they shared.  We get it's suppose to be about Timmy's lost love, so we don't need to have it spelled out.

Director Mark Pellington not only had an obsession with making all the seedy aspects of their Lost Week sound rather pompous, but he drowns the visual aspects of the film with grandiose imagery.  Take for example when Jonathan kills himself by injecting himself with poison.  The window becomes a television of sorts where we see his son and ex-wife in happier times.

Curiously, two of the guys have children, but they don't seem to really care about how their deaths will affect their kids, only interested in keeping some pledge that no person in his right mind would keep.

Then again, given that they were nearly always high on something, maybe they weren't in their right minds. 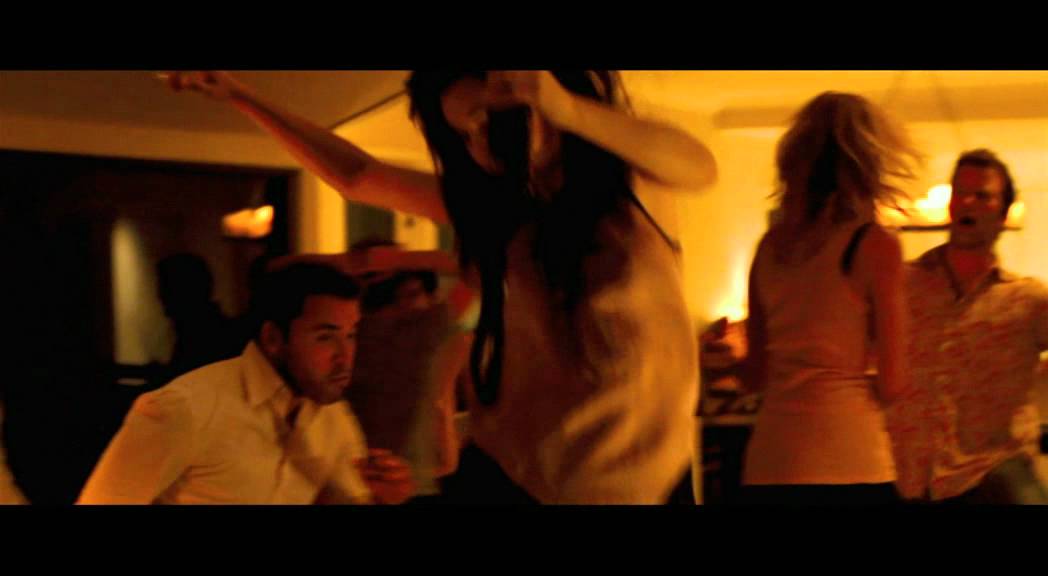 Putting aside just how loathsome these guys are, the performances are altogether awful.  There were times when I felt genuinely sorry for them and didn't want to watch the screen.

Worst off is Gugino, who has to be one of the dumbest cops in film history.  It's bad enough that despite all the clues to there being something wildly wrong in the beach house, she never appears to think that these guys were up to something.  A cop who had one ounce of brain power would have either asked to investigate three mysterious disappearances or at least figured out that these guys were on something.

However, she just looks like she doesn't genuinely understand what is going on.  Moreover, when any sane person would have called for backup and/or arrested a clearly deranged and unstable Richard, she appears to have no problem leaving him, making her irresponsible and just as bonkers as the guys.

As for the guys, they really appear to try to be doing their best in their performances, but none of them could make us care about these characters or their predicaments.  Too much time is spent on indulging their drug-and-sex antics to make their pseudo-philosophizing either interesting or intelligent.

McKay probably was the best off, since he was the first to die.  You could never get over the idea that these four would find time with each other as insufferable as we did, only we didn't have the benefit of drugs to dull our boredom.  One might have thought their friendship would have helped but in the end it only appeared to have fed their own narcissism.

The best way I can sum up I Melt With You is thus: it's The Hangover plus Grown Ups meets The Jonestown Story crossed with And Then There Were None.

This is just a horrible film on all levels, shaming the Modern English classic.