Behind the Candelabra: A Review The Piano Man's Mad About the Boy...

Liberace in his life was as gay as it was possible to be without actually being officially 'out of the closet'.   His thin voice, predilection for lavish costumes, effeminate mannerisms, a curious lack of female companionship (apart from his mother) and a retinue of pretty boys would have made people at least wonder whether this talented pianist was homosexual.  Liberace WAS a walking gay stereotype, yet Lee stubbornly refused to even entertain the notion that people would think he was anything other than straight.  Early in Behind the Candelabra, the television film of Lee's romance with Scott Thorson, the young and naïve boy is taken to a Liberace concert by Thorson's latest lover.  When a gay joke is cracked, a little old lady gives them a dirty look.  This group of fans, the blue-haired ladies, equally refused to believe Lee was gay (despite the overwhelming evidence).  I read it somewhere that these women, Liberace's hardcore fans, loved him because to them, he WAS the gay son they had, or had but didn't want to admit they had, or the gay son they subconsciously wanted, the one who would never leave them.  Behind the Candelabra gives us this affair (romance is too fine a word for it, though not because of the gay aspect) in all its gaudy trappings, all its grand spectacle, but it also finds the heart to these two men, in love, in lust, in hatred, and in the end, in terrible regret of all that had come between them.

Scott Thorson (Matt Damon), a young kid without an official family, loves animals and works caring for stunt dogs in films.  While his foster parents suspect he may be gay, Scott won't admit or deny anything.  He is picked up by Bob Black (Scott Bakula), who happens to know the FABULOUS Liberace (Michael Douglas).   Lee, to his friends, is instantly attracted to the very pretty Thorson, and despite their age differences, Liberace is able to seduce Thomson both physically and emotionally.  Scott tells Lee he is bisexual, but that doesn't stop Lee from making him his newest companion.  Scott soon finds himself part of Lee's entourage, up to being part of the show. 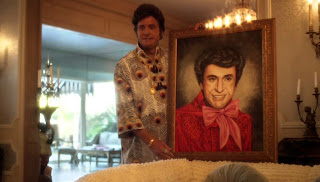 However, Lee's lifestyle turns Scott from his partner to his prisoner.  Liberace soon takes over Scott's life: the younger man is astonished by Lee's voracious sex drive, appalled by his obsession with porn, and in perhaps one of the most jaw-dropping moments of ego, gets Scott to undergo plastic to become a version of Liberace himself.  Scott soon drowns his sorrows and fears in alcohol and drugs, while Lee soon starts getting the wandering eye (and an occasional tryst with even younger boys).  The death of his mother Frances (Debbie Reynolds) seems to free Liberace, while the death of Scott's foster mother seems to seal his doom in Lee's affections.  Despite showing him some kindness, it seems that for Lee, the idea that anyone could take Lee's place is too much.

Liberace turns his attention to what he thinks of as one of the great moments of his life: performing the Best Original Score nominees at the Academy Awards, but by this time Scott is out as Lee's partner.  A furious and scorned Scott does what no other boy-toy has done: sues him.  Lee survives the lawsuit but by now Scott has been reduced to a drug addict who had sold all the jewels given to keep the drugs flowing.

Finally, as Liberace succumbs to AIDS, he and Scott have one last meeting.  Lee tells his once-lover he does not want to be remembered as 'an old queen who died of AIDS'.  Yet, despite his best efforts, an autopsy forced by officials over the family and entourage's objections confirms that this deeply closeted (to himself if no one else) had died of 'the gay disease' as it was thought of then.  Behind the Candelabra ends with Scott at Liberace's funeral, where he imagines how the Catholic pianist might have had it done: as a big, lavish, Las Vegas production, in keeping in tune (no pun intended) with the flamboyant performer's whole life.


For me, the curious thing about Liberace is that I've always felt he deliberately made himself the joke.  He loved camp and delighted in dressing outrageously to an embarrassing degree.  Gaudy, unapologetically over-the-top, he looked foolish but at least he 'cried all the way to the bank', knowing that for all the vulgarity of his shows, it's what afforded him an excessively lavish lifestyle.  The capes, the feathers, the furs, the sparkles: all those things a straight (and I imagine, many bisexual) man would reject, but Lee didn't mind being the Court Jester of Classical Music so long as he could get what he wanted.  Behind the Candelabra could satisfy itself by focusing on the lavish spectacle that Lee indulged in both on stage and behind the scenes, but at its core the film goes into the strange but sad world the pianist and the plaything found themselves in.

Steven Soderbergh is far too good a director to get drowned in the grandiose trappings Mr. Showmanship regularly presented.  Instead, while we get the lavish world of Liberace, we also get these intimate moments between an older man who finds himself famous but somewhat alone and a lonely young man looking for something and someone to love and be loved by.  At its heart, Behind the Candelabra is a sad love story done in by all those things that love stories are doomed by: a lover ignored who starts turning to other stimulants to fill his emptiness, another partner who soon starts tiring of both his younger boyfriend's prudishness and soon turns to someone else to satisfy his cravings, and who finally realize that they've thrown away so much in equal terms.

We do get some shocking, even comical moments.  Liberace kept so much hidden, from his toupees to his passion for sex.  One laughs at how Lee sees nothing bizarre at the thought of Scott getting plastic surgery to look more like Liberace, or how Liberace's own plastic surgery to look younger now leaves him incapable of completely closing his eyes (even when sleeping).  One also marvels at Scott's naivete at being in this world.  Behind the Candelabra also shows some touching, even beautiful moments.  Lee describes how he could be both a practicing Catholic and practicing homosexual.  At one point Liberace had been close to death when he says he was visited by a nun dressed in white.  When he did recover, he discovers that there was no nun in white.  Soderbergh films this in beautiful black-and-white, giving it a haunting (and haunted) style, while Scott's drugged-addled moments are shot in a haphazard, confused manner reflecting his mental stage. 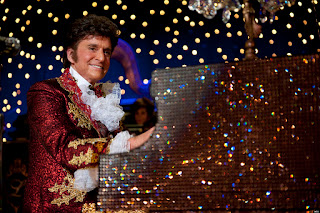 In terms of performance we get two wonderful ones with Douglas and Damon.  Turning to the latter, despite being twenty years too old to play Thorson Damon makes Scott a naïve, clueless boy who gets caught up in a weird and wacky world.  We soon forget that a middle-aged man is playing young, getting instead a person who slips into drugs due to his insecurity about being at the heart of his older lover's affection.  Douglas manages to sound as close as anyone can to the actual Liberace, but he also gives a splendid performance as the flamboyant entertainer, almost clueless in his narcissism, his obsessions, his vanity, and his mad desire to keep private what the world basically knew: Liberace's homosexuality.  Still, at the heart of Douglas' performance we do feel at the end for him, seeing him hairless, fearing that he would not be remembered for what he wanted to be remembered for (his piano playing and joy he brought to millions) but for one aspect of his life.

I do wonder why Behind the Candelabra ended with an imaginary funeral and Liberace telling us one of his famous quips, "Too much of a good thing...is wonderful," rather than giving us his signature closing song, I'll Be Seeing You.  Perhaps that would have been too sad while the lavish faux-funeral tries to end things on a high note (no pun intended).

I still would have liked for Lee to get his proper send-off the way he did, but then again like Lee, we don't get to end things the way we wish to.

Behind the Candelabra shows two men who find themselves in a beautiful, stormy, and doomed relationship.  It has moments of shocking humor and tenderness and compassion.  Perhaps Liberace is now thought of as high camp, gaudy costumes, and death.  However, we see that there was something to his flamboyant manner, and since Lee was in on the joke he was able to get away with so much...except the truth of himself and the consequences of his reckless actions.