Elementary: We Are Everyone Review ELEMENTARY: WE ARE EVERYONE

As much as I've enjoyed Elementary, with occasional stumbles, I have never seen an episode that stumbled as much as We Are Everyone, where Elementary found itself turning into Law & Order.  It isn't until the end where the episode picked up a bit, but that really wasn't enough to lift it from the ditch it dug itself into. The character developments Elementary excels in were in supply, and they were still good, even clever.  It's the case, the resolution, and even plot elements that fell flat.

Sherlock Holmes (Jonny Lee Miller) has been brought in to consult on the case of Ezra Klienfelter (Christian Campbell), an Edward Snowden/Julian Assange mix.  Ezra has released secret information, much to the concern of a Mr. Mueller, a powerful and mysterious figure who has contracted Holmes to find Klienfelter.  They track down Klienfelter's journalist contact Cecilia Carroll (Laura Osnes) who truly doesn't know where he is (but she loves the limelight).  However, she does have a contact who contacts Klienfelter: a security guard who is found to be part of Everyone, an Anonymous-type group.

Everyone has been hiding Klienfelter as they attempt to smuggle him out of the country.  Holmes has been engaging Everyone in online fights, partly to draw information out of them, partly because he has contempt for them.  Holmes and Watson do track down Klienfelter, who has been harbored by Vanessa; only one problem: Vanessa is dead.

Everyone, however, starts turning the tables on Holmes and Watson: they hack everything they have, phone, computers, even the TrueRomantix online dating profile set up for Watson by her friend.  They are relentless, refusing to believe their hero is a murderer.  They even manage to get the FBI to think Holmes and Watson are threatening the President, wasting valuable time. 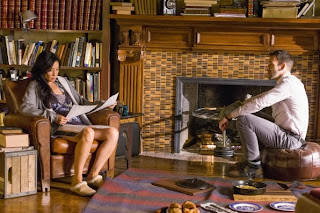 Holmes and Watson know Klienfelter killed Vanessa, and now begin tracking him down with the clues they get from the material found in Vanessa's apartment: a copy of The Fountainhead and an old bomb shelter box.  They do find Klienfelter, but before he's formally arrested he tells them if they move against him, he will release the name of deep cover agents.  With their hands seemingly tied, they are forced to release him and he begins his flight to Venezuela.

It all looks rather hopeless except for a few things.  One: Watson has managed to take Klienfelter's watch, thus tying his DNA to Vanessa's killing.  Two: Holmes goes to Mueller, who is really Elliott Honeycutt (Ronald Guttman) knows more about government malfeasance than he's letting on.  He gently tells Honeycutt that he must help him not let Klienfelter get away with something like murder.  In exchange for getting immunity for espionage Klienfelter surrenders when his plane is forced down in Miami, the spies are spirited away, and with Klienfelter found by Everyone to be a murderer, their support for him collapses.

On the personal front, Holmes reads a letter from Jamie Moriarty, and Watson gets a visit from Jeff Heinz (Steve Kazee), a guy she corresponded with on TrueRomantix who tells her that her address has been posted all over the website.  They do go out and while there's nothing overtly romantic she at least begins to start having a life outside of Holmes.

The elements of We Are Everyone in terms of character development are really excellent, particularly at the end when we see that both Holmes and Watson have been rather hermetically sealed from the world.  Holmes in particular has renounced love after Adler/Moriarty brought that part of his life crashing down.  Watson, however, now starts to slowly see that perhaps she has let a lot of other things in her life go by the wayside in her new life with Sherlock. I was very pleased by this turn of events, and I hope that the Jeff Heinz subplot is not dropped like so many other stories.  We have yet to see the return of Miss Hudson and Sherlock's sponsor Alfredo has similarly disappeared.  Granted, we're only in the third episode of the second season, but Elementary has been having difficulty in keeping subplots going.  They are brought in for one episode, then almost forgotten by the next.  In the oddest turn of events, the most recurring guest star has been Clyde, Sherlock's pet turtle.  It is so interesting and tempting to think that Joan Watson will get a normal relationship with a normal guy (or given how stories go, a twist into making him a master criminal).  Still, no suggestion that Jeff is anything other than a nice guy who likes Joan.

Again, it would be nice to see at least one subplot going, and given that eventually Watson does marry it would be a nice storyline to see a relationship for Joan.  It also will remove the idea that Joan and Sherlock will sleep together (which would be the death knell for the series).

Craig Sweeny's screenplay also had some clever quips.  Holmes' continues use of the word 'nefarious' is a source of humor.  Sherlock also knows that Mueller is not who he says he is.  "No Belgian is that bad at backgammon," he remarks.  Another good line is when Joan wonders whether the whole thing might be government-sponsored.  "Governments are capable of evil, yes, but they're more capable of incompetence".  Truer words were never spoken.

However, Sweeny's dig at Ayn Rand and her enthusiasts (read, the Tea Party Movement) we could have done without.  Not because I support the Tea Party Movement but because I bristle at ANY attacks on people's political views save for Nazis and Communists.  When Watson reads Klienfelter's blog and finds many Ayn Rand quotes, Holmes dismisses it all.  "Philosopher-in-chief to the intellectually bankrupt," he declares the Objectivist leader.   While libertarians do applaud the whistleblowers Assange and Snowden, there really is not much to connect them as far as I know to the non-theology of Rand.

Now, we do have some good performances from both Miller and Liu.  The final moments when in voiceover Holmes and Moriarty read her letter is so well acted and filmed, and seeing Liu as Watson show that she does think of Sherlock as a friend makes it worth the time.  Campbell, though gone from much of the episode, still gives a strong performance going from almost frightened whistleblower to cold-blooded killer.  Apparently, Christian Campbell is not related to Billy Campbell, but they look so much alike I thought it was the Rocketeer in a guest starring role.

The subplots and moments of humor (such as when Holmes gets a request from Everyone to get Watson to send nude pictures of herself, which she quickly dismisses) and in showing Watson can be bright in putting a lot of the mystery together (though Holmes still is the Great Detective) gave points to the story; the human interaction work well also.  In fact, We Are Everyone can take a double meaning: not just in the hacktivist organization but also in that in their own way, Sherlock Holmes and Joan Watson are like 'everyone'.  For me, the thing that pushed We Are Everyone down was that 'ripped from the headlines' nature of the story.

Due to that, We Are Everyone rises to a barely above average Elementary episode.  Still, on the whole the few minutes of human emotion give it a good push forward, so things do appear to be looking up for the series.

Next Episode: Poison Pen
Posted by Rick at 2:30 AM