No is a very simple word used in at least two languages (English and Spanish) and a variation in another (the French 'non') to mean the same thing: a negative, a rejection, a word I hear a lot.  No, the somewhat factual, somewhat fiction story of the most daring ad campaign in history (one that toppled a dictator), has an authentic feel to it thanks to its cinematography.  While the story is good, even interesting, I found it all a bit dull.

Chile, 1988.  International pressure has come upon Chilean General Augusto Pinochet to have democracy return to the South American nation after his coup in 1973 (September 11th, curiously enough) brought him to power.  Pinochet finally gives in, announcing a plebiscite with a simple question: should he remain in power for another seven years?  There are only two answers: Si (Yes) or No (No).   The No Campaign is convinced it is nothing more than window dressing to a brutal dictatorship and doesn't want to participate, but it does.  Their campaign is based on the brutality of the Pinochet years, with footage of the oppression Chile has endured.

Enter Rene Saavedra (Gael Garcia Bernal).  An advertising man, he is asked by the No Campaign for unofficial advise.  He looks at their campaign and dismisses it, calling it too downbeat.  Instead, he suggests instead an upbeat, almost happy series of ads during their brief running time (both the Si and No sides are given fifteen minutes of airtime).  Chile: Viene La Alegria (Chile: Happiness Is Coming) is what he offers the No side, right down to a rainbow that makes up the NO.  Some of the No Campaign is horrified by this, believing it is rather dismissive of 'their' suffering.  However, Saavedra sees what they don't: if they make it all fear and trembling, they run the risk of alienating the two groups they need: housewives and the young.

The Si Vote is pretty dismissive of the No, including Rene's boss, Lucho Guzman (Alfredo Castro).  He attempts to get Rene out of working with the No by offering him full partnership, but he refuses.  Lucho goes to the Si Vote to consult for them, and it seems they need all the help they can get.  Confident of their victory, the Si Campaign is heavy-handed and boring.  In the time frame between the beginning and end of the campaign, No's flippant and optimistic campaign, even down to mocking Si's stumbled efforts to discredit the opposition, leads to the improbable victory of the No side. 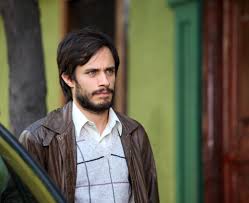 What makes No fascinating is that while the results should be known, we are kept guessing to the end whether they will make it to the finish line.  Credit should be given to Pablo Larrain, who keeps building the story to great effect.  In his recreation we get a great feel to how the campaign look interesting, even amusing.

Perhaps this is where No stumbles for me.  The decision to film everything in low definition (matching the video tape stock of the late 1980s) washes out the imagery, and soon it grows boring to actually watch (when was the last time YOU watched a VHS copy of a family vacation?).  Further, the subplot of Rene's wife (a political activist) and their son could be completely removed from the story without impeding the flow.  Note that in my synopsis, I never mentioned any of that storyline.

I can't fault the performances, particularly that of Garcia Bernal.  I've been told I bear a resemblance to him (and not just because I'm short), so I'm prone to like him, though not particularly his performances; I have yet to see a film of his that I've actually loved, not Amores Perros, not The Motorcycle Diaries, not Y Tu Mama Tambien, not Letters to Juliet, not Babel, not The King, not The Crime of Padre Amaro.  No does not make me think that streak has been broken.  On the whole though, Bernal gave a performance of that of a man who is more interested in proving he can sell a product (that being, 'democracy') than any firm anti-Pinochet convictions.

The film does have a documentary-like feel (thanks to its lack of score and washed-out look) and on the whole, No is an interesting, if a bit slow, almost dull, document on how with some clever campaigning brought a dictator out of power and ushered in a transition to democracy.

Would that all revolutions be that smooth...