Well, with Moriarty safely out of the way, Elementary, the CBS Sherlock Holmes series, can turn its attention to other matters.  We now have Sherlock (Jonny Lee Miller) and his partner-in-crime solving Dr. Joan Watson (Lucy Liu) in London, where Canon characters are a'poppin' out all over.  If anything, Step Nine has ONE positive over any episode from its BBC rival Sherlock: no one will ever ask or hope that the TARDIS appear in front of THEIR 221 B Baker Street!

Seriously, these Wholockians need to get a life...and a brain!  Even my bête noire Steven Moffat thinks a Sherlock/Doctor Who crossover is a stupid idea, and for HIM to think something's stupid...

Yet I digress.  Step Nine brings in two Canonical figures with mixed results.  While both guest stars give strong performances, one seems to be there just because Canon requires it, while the other suggests that there is more to be told about him.

In London, Detective Chief Inspector Gareth Lestrade (Sean Pertwee) has burst into a funeral for publishing magnate Warren Pendry.  He accuses the dead man of using his power to both protect his son Lawrence (Rufus Wright) from facing charges that he murdered his wife and for persecuting Lestrade because he was close to proving Lawrence's guilt.

Meanwhile, in New York, Lestrade's old ally in crime-solving, our Mr. Holmes, is wrapping up a case when he gets a message from Scotland Yard: they need Holmes' help in finding the renegade DCI.  With that, Holmes and Watson go to Holmes' old stomping ground.  After a debriefing at the Yard, it's off to 221 B Baker Street, what Sherlock calls his 'sanctum sanctorum'.  However, it's changed from what it was before: nothing of his is there, and he's alarmed.  It's now that we meet a new figure: none other than Sherlock's older brother, Mycroft (Rhys Ifans), a major restaurateur and a bit of a wastrel in Sherlock's eyes (despite his gaunt figure Sherlock constantly calls Mycroft 'Fatty').
There is obviously bad blood between the Holmes Brothers.

Sherlock soon makes easy work of finding Lestrade, and now Holmes despite his protests to the contrary is going to help his former police contact in solving the Pendry murder.  Holmes has guilt over Lestrade's state, seeing that Lestrade has become addicted to the fame the cases they investigated (Holmes' actions being kept out of the press, of course) gave Lestrade.  However, Lestrade is not a fool, coming close to actually proving Pendry murdered his wife.

Watson, meanwhile, wants to find out more about Mycroft, thinking it could help Sherlock make amends with his distant brother.  She deduced that Mycroft had been ill, and he asks her how he, too, could become Sherlock's friend.  Both Holmes Brothers look back in regret: Mycroft about his relationship with Sherlock, Sherlock with regards to Lestrade's situation.  By actually proving Lawrence did murder his wife, Lestrade's reputation is restored, even if Lestrade did indeed take credit and rush to the press despite Holmes' warning that this time he would reveal his involvement in the case.

Step Nine does what Elementary does best: focus on character development over crime.  Perhaps in a procedural the crime should be important, but Elementary has decided that we will have more interest in the lives of the characters rather than giving us some strange, convoluted case.  The actual murder in Step Nine is solved with logic, true, but some of the clues were obvious (the off-kilter mask) and some rather opaque (the 3-D printer making guns).   One really bright point was that at the second murder scene, it was Watson who was putting things together.  Sherlock was hunting for something to put things together: how a smaller man like Pendry could kill someone much larger with the victim apparently putting little to no struggle.  Watson, however, found through her medical training that the victim was murdered with the left hand, while Pendry was right-handed.  If Pendry killed the man, why would he use his non-dominant hand?  THIS was the trigger (so to speak) for Holmes to put it all together.

The case is almost secondary, but the story of the Holmes Brothers is so well-acted that it lifts Step Nine.  Ifans is a delight as Mycroft, bringing some humanity to a character who tends to be this shadowy figure within the bowels of government.  When he asks Watson how to be Sherlock's friend, it is played so real.  One can imagine these two are really brothers who have had a tempestuous relationship.  Mycroft blowing up Sherlock's property adds a touch of comedy and shows that the Holmes Brothers are very unique siblings.

I also found Pertwee did a wonderful job with the craggy Lestrade, less a fool than a disheveled cop.  While Pertwee's performance was strong the disappointment comes from the fact that Lestrade could have been replaced by another character without great difference to the story.  It would be a terrible shame if Pertwee (and Lestrade) were to never return to Elementary.  Part of that would be because Pertwee gave a strong performance, part of it because to have Canon characters just to have Canon characters seems a waste of time.

With regards to the leads Liu still impresses as Watson, who is stronger and smarter than most interpretations of the good doctor.  With Miller, he has established his Sherlock as a stiff man physically, but I find that here his physicality and his dress describe who he is.  He buttons his shirts to the top, and his holds himself very erect.  I think that this is to show he is someone who wishes to be in total control of himself, sometimes to excess.  It gives his performance an added touch I hadn't appreciated until now.

In another Canon element, it is unfortunate that 221 B Baker Street was put in the background.  As a side note, Baker Street seems to be in a run-down neighborhood, which is against my memory of the real 221 B Baker Street when I went there.  The area seemed a bit more upmarket, but some liberties should be expected.

Craig Sweeny and Elementary creator Robert Doherty's screenplay has great nods to the Canon apart from Lestrade and Mycroft's appearances.  We also get some great bits of dialogue.  When Holmes rushes down to encounter his brother, he says, "Oh...my God".  Mycroft merely smiles and answers, "My...croft".  A bit later, when Watson argues that they are connected because they are brothers, Sherlock snaps, "Our relationship is entirely genetic".  I find that line endless clever and wish I could use that with some thieving cousins.

One thing in the screenplay I didn't care for was when Sherlock was suggesting that Joan's agreement to dine with Mycroft would automatically lead to her seduction (in the same way Sherlock had slept with Mycroft's fiancée to prove she was a golddigger, Mycroft's feelings be damned) as well as some repressed desire to sleep with him.  While I admired how Joan just ignored Sherlock's sex talk, it did seem rather pointless to have this when their relationship has been so well-established.

Minus this small slip-up and a second-rate crime in terms of characters Step Nine is a step positive to the series, and the adding of humor pushes the episode higher.  On the whole, I found Step Nine a pleasant, well-acted story that shows Elementary will be its own thing.  We hope Mycroft returns to delight us with more Holmes Brothers banter. 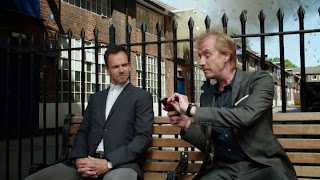 Next Episode: Solve For X
Posted by Rick at 7:38 AM