Ben-Hur: A Tale of the Christ. A Review *As per tradition this review will not compare the original and the remake.  In another post there shall be comparisons.

Ben-Hur had already been a wildly successful book and a long-running play when it made its feature-film debut.  It was a no-brainer as to why Ben-Hur held the public's attention.  How can one fail when you mix two things Americans love and are fascinated with: God and Sex (sometimes in that order).  The blending of topless dancing girls with the redemption Christ offers is a tantalizing combination to the American psyche.  Ben-Hur: A Tale of the Christ, is not as well-remembered as its spectacular 1959 remake that saved MGM (temporarily) from bankruptcy, so much so that I suspect many people are not aware that the Charlton Heston version is a remake at all.  Ben-Hur is in many ways as equal to the William Wyler epic, in some ways better, in some ways weaker.  On the whole, it is still grand entertainment that especially silent film lovers will enjoy.

I'm going to figure people know the general story of Ben-Hur (though again, never having read General Lew Wallace's novel I cannot vouch for how any version keeps to it): Judah Ben-Hur (Ramon Novarro) is a Jewish prince at the time Jesus of Nazareth is born.  Judah was friends with Messala (Francis X. Bushman), a high Roman officer, since childhood.  However, Messala believes that Rome has the divine right to conquer all the Earth, which does not sit well with the Jewish patriot Judah, who wishes his country free from Roman rule.  An accident involving the new Roman governor of Judea is the incident that Messala uses to arrest his former friend as well as Judah's mother and sister Miriam and Tirzah (Claire McDowell and Kathleen Key).  Only the loyal Hur slave Simonides (Nigel de Brulier) and his daughter Esther (May McAvoy) escape arrest.

Judah is condemned to the galleys, where again fortune takes a turn: an attack of pirates brings him and Roman General Quintus Arrius (Frank Currier) together.  Arrius at first wants to kill himself, but Judah saves him, and once they are rescued Arrius is so grateful he adopts Judah and makes him his heir.  Judah has earned fame and glory as a charioteer, but still he yearns for two things: to learn the fate of Miriam and Tirzah and revenge against Messala.  He returns to Judea, where Sheik Ilderim (Mitchell Lewis) convinces him to race his chariot against those of Messala.  Judah, while in Antioch, meets the mysterious Miser of Antioch, who is really Simonides and recognizes Judah.  The Miser, however, keeps silent, for if he acknowledges Judah he knows he and Esther will legally return to slavery for they belong to the House of Hur.  However, beautiful, sweet Esther, who has loved and been loved by Judah, convinces Simonides to reveal himself.

Judah's true identity (known in Antioch racing circles as The Unknown Jew) is learned by Iras the Egyptian (Carmel Myers), Messala's mistress, who attempts to seduce Judah but who fails due to his all-consuming obsession with Messala.  Once they meet on the chariot field, we know who won, but still Judah's heart is empty.  Miriam and Tirzah have now finally been released from prison, but they are lepers and thus cast-off from society.  In all this, the figure of Jesus the Christ comes in every so often, and Judah is convinced He is the Warrior King who will lead the Jews to victory.  He spends a fortune raising an army, but at Christ's crucifixion Judah at last realizes that victory will not be won by blood but by The Blood.  Now, with the Hur family reunited and healed, come to see the Christ will live in their hearts forever.

I cannot say that Ben-Hur is terrible.  Far from it: the film has much going for it.  First off, the story is quite Christ-centered.  We never see Christ (hearing Christ would be impossible in a silent film).  Instead, we only see his hands at the most, and the film opens with Christ's birth in a stable (though if one is to be historically accurate, the title cards reading 'It was the twenty-fourth day in December' is wrong since more than likely Christ was not born on Christmas).  In fact, we can see in Ben-Hur the parallel stories between these two nice Jewish boys.  We see Christ delivering The Sermon on the Mount and the Last Supper (plainly echoing Da Vinci's painting) and while both are beautifully filmed it is almost bizarre to see how director Fred Niblo went to hide His face, even at birth.  In this regard, we see that the subtitle of A Tale of the Christ is quite accurate.

The cinematography is one of the glories of Ben-Hur.  The film has some beautiful early color sequences (all but one involving Christ) that render the scenes as beautiful as paintings.  The one color sequence that doesn't involve Jesus is when Judah rides in triumph after another chariot victory (and one sees quick glimpses of topless girls leading the parade).  Here, we're allowed to see how beautiful everything (and everyone) is.  The two big pieces in the film (the sea battle and the chariot race) are also beautifully filmed, and more importantly very exciting.  The editing is fast-paced in both sequences, and with regards with the chariot race itself it thrills in its rapid movement (in particular with two POV shots where we are underneath the chariots, an amazing feat for any period, let alone the 1920s).

The story is also quite rich.  The various subplots (Simonides, the Hur women) give the film a greater feel.  When Judah's mother and daughter come across a sleeping Judah, their tender goodbye is quite moving.  Similarly, when Judah and Esther meet it is also quite pretty, even cute.  Even the story of Iras adds something to the story: the temptress who fails to tempt, and Judah's desire to serve as the Lord's Army general also lends Ben-Hur a more fascinating secondary story. 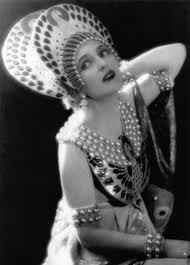 One also marvels at some of the special effects, such as how Christ heals the Hur women from leprosy or the Announcement of Christ's birth.  When we think when the film was made, it makes it all even more extraordinary.

What Ben-Hur has as a flaw is that is has what most silent films have: acting that today is seen as rather broad.  Novarro is rather overenthusiastic as the title character, and while he started well by the end he almost seemed to be whooping it up to his full abilities.  It is a bit hammy but in his defense his performance isn't unexpected in the realm of silent films.  Few actors of the silent era could be called subtle: Garbo comes quickly to mind, but few others.  McAvoy's Esther is all so prim and pretty, but Bushman did the best of the main cast as the brutish Roman.  I also thought well of de Brulier's Simonides, having to struggle between being loyal to the Hur family and his desire to keep Esther free.

Myer's Iras is a bit of a mixed bag: on one level she lends a great deal of sex to the film, but on the other when her lover is killed, one isn't sure if she is crying or laughing given her performance.  Then again, perhaps we are not meant to know for sure.  I could also add that some of the title sequences were equally overwrought ("If you are as slow tomorrow as you are in lovemaking tonight, Messala could race snails and win").

For this film, Carl Davis' score is beautiful, lending the film greater power.  However, in what seems strange is that while Ben-Hur is almost two-and-a-half hours, to me it felt longer and in some moments dragged.

On the whole, Ben-Hur: A Tale of the Christ is a great film.  It does feel a bit long and some of the performances now look rather silly, almost comical.  However, the film holds up extremely well with some thrilling sequences.  It has meaning and power...but with a little sex in it.