COMINT, the fifth The Americans episode, keeps a focus on what can be the strangest case of work and family life colliding as our KGB spies and their hunters target the same person and the shocking results both personal and professional from all involved.

The Rezidentura is losing its grip on Adam Dorwin (Michael Countryman), a longtime spy who is not only lonely after the death of his wife but who has been cut off from his minder ever since the FBI got the KGB encryption codes that allow them to tail Soviet agents.  Claudia aka Grannie (Margo Martindale) tells Elizabeth Jennings (Keri Russell) that Adam cannot be contacted by her or anyone other than Adam's minder (unlike the Americans who can trade caseworkers), and tells her of when she befriended an informant in West Berlin who was a loner.  After his usefulness expired, he thanked Claudia...and then shot himself.

FBI agent/the Jennings' neighbor Stan Beeman (Noah Emmerich) pushes his mole Nina (Annet Mahendru) to find out about Dorwin, whom the agency suspects of not only espionage but of being on the verge of cracking and thus giving them valuable information.  In order to get this information, Nina becomes the mistress of the Rezidentura head Vasili (Peter Von Berg).  Thanks to her blowing something other than her cover, Nina helps Stan but Stan, who by now has become besotted with Nina, is displeased that she took one for Uncle Sam by screwing Mother Russia.

Philip (Matthew Rhys) for his part, is enraged that Elizabeth's new assignment has beaten her as part of his perverse sex games.  Elizabeth tells him not to bother, but Philip doesn't want to stay on the sidelines as his wife is physically abused.  Still, they have more important things to do: find the encryption codes, which involves stopping the FBI agents getting close to them and in a tense sequence, Elizabeth breaking into the trunk of the FBI's car and making a bold and daring escape.  However, the codes that the KGB has that allow for a safe meeting with Adam, now get a twist when Nina tells Stan they have them.  A mad rush between the FBI and the KGB attempting to find Adam leads Elizabeth to a shocking but necessary act.

Now both sides know there is a mole, but no one knows on which side the mole is on. It is this moment when Elizabeth strikes, when Adam has a quick glimpse of hope in his disheveled state, and Vasili's silence as the FBI follows him and knows what they don't (that he was sending his friend to his death) that leaves the biggest shock.  We see Russell give in those few moments such an incredible performance: the mix of shock, horror, and determination in her face as she shoots this poor, sad, lonely man point black send shivers.  Elizabeth is momentarily stunned at her own act of violence towards this pathetic figure, but she is also a devoted member of the KGB (Putin would love her as a daughter).

In fact, COMINT really was Russell's show from beginning to end: from the meek questioner who interviews Adam to the violated (and temporarily terrified) sex victim to the tough and invulnerable woman, Russell's work in The Americans really deserves more recognition.

COMINT also has the added bonus of giving us a great tense scene when Elizabeth finds herself trapped in the FBI agents' car.  How will she get out?  WILL she get out?  Just the scene of Russell entering the trunk when both the FBI and the Jennings' cars were lifted up was tense enough, but seeing her trapped to by sheer force of will calming walking out of the FBI headquarters parking lot (even saying bye to the guard) to arrive at Philip waiting for her with coffee all adds up to a brilliant and tense few minutes.

COMINT does so well in blending the personal and professional.  The lives of the Jenningses and Beemans are all blending into strange shapes.  Philip, who has now grown closer to Elizabeth, can only stand by helpless as his wife is brutalized.  He wants to do what any man would do: take care of the abuser, but Elizabeth makes it clear she won't have that.  Stan for his part, soon starts finding his infatuation with Nina is clouding his judgment.  The men, it seems, are forgetting their roles.

We see this effect on Stan when he begins to learn Russian.  At this point we don't know whether he truly is falling in love with Nina or is merely trying to find something exciting in his personal life, especially compared to his partner Chris Amador (Maximiliano Hernandez), a swinging bachelor who encourages Stan to find some fun from home.

Martindale continues to make Claudia/Grannie into a dangerous woman beneath the cuddly exterior: her reminiscences of West Berlin leaving a crack of humanity beneath her all-business exterior but when she tells Elizabeth why she opposes the Equal Rights Amendment then being pushed, we see that in her own way the idea of feminism strikes her as foolish, even decadent.  Grannie is not to be trifled with.

COMINT gives us a shocking ending and a thrust for the season: the finding of the mole.  Where it leads will lead to some truly shocking, even sad, consequences for all involved. 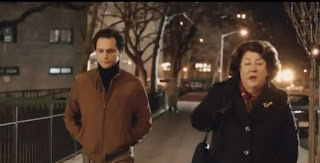 Next Episode: Trust Me
Posted by Rick at 8:30 PM