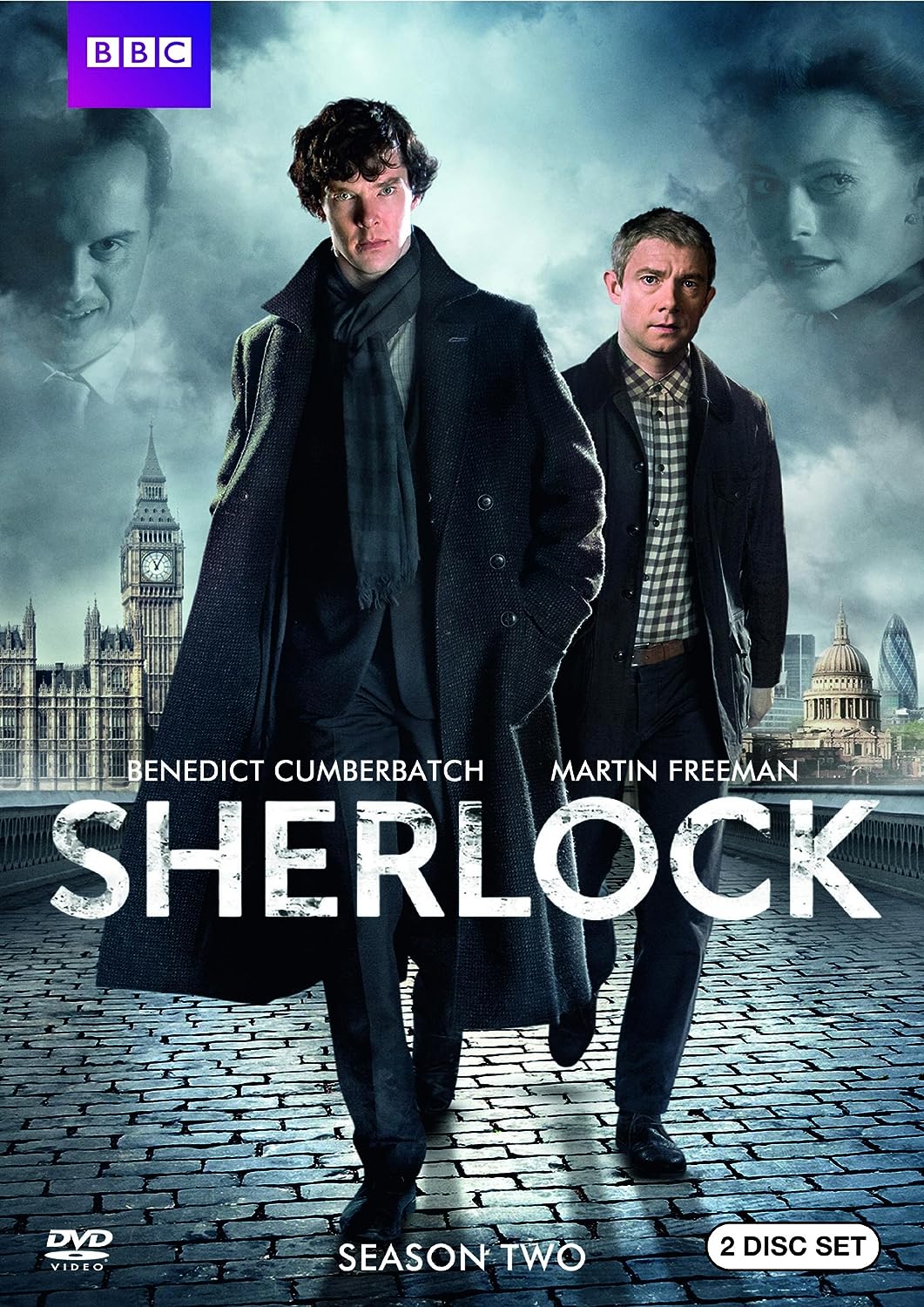 Well, I am only three episodes from seeing what all the fuss is about.  Having plunged into the weird and wacky world that is Sherlockian (that group of Sherlock fans who think no other version, past present or future will ever touch this version of the Arthur Conan Doyle Canon), after six episodes I still cannot comprehend what hold Sherlock has over people.

I think it's in many ways a lousy show.

I know that my intense, almost pathological hatred for Sherlock co-creators Mark Gatiss and Steven Moffat may color my views, but I also have to put in a disclaimer to that caveat.  I am if anything a fair man.  I gave positive reviews to some Gatiss and Moffat-penned Doctor Who stories, and I have been complimentary towards some Sherlock episodes.  I also think some of the acting is strong.

With all that said, Season Two of Sherlock veered wildly from episode to episode.  This season it tackled the three best-known stories from the Canon: A Scandal in Bohemia, The Hound of the Baskervilles, and The Final Problem.  The first and third introduced characters from the Canon that have not only become iconic but have spun their own non-Canon stories and legends.  Scandal in Bohemia introduced "The Woman": Irene Adler, the only woman to have defeated Sherlock Holmes.  Final Problem brought us Holmes' intellectual equal and his greatest nemesis, Professor James Moriarty*.

Despite their appearances in three stories (one for Adler, two for Moriarty), they have become so entrenched with the Holmesian Legend and Legacy that they are now permanently interwoven with The Great Detective.  So great is Adler's hold over Holmesians in particular that she has become what dear Sir Arthur never imagined: Sherlock Holmes' love interest.   In all three current Sherlock Holmes adaptations (Sherlock, Elementary, and the Guy Ritchie films), she is seen as the Ginger to Sherlock's Fred: he gives her class, she gives him sex.

Now, let us look over all three Sherlock Season/Series Two episodes from Best to Worst:

The Hounds of Baskerville: 7/10
A Scandal in Belgravia: 4/10
The Reichenbach Fall: 3/10 (and I still think I was being generous).
﻿﻿﻿﻿
My rankings put me in sharp opposition to the majority of reviewers, who LOVED both the multi-Emmy nominated Scandal in Belgravia and The Reichenbach Fall and generally disliked The Hounds of Baskerville.  I can see somewhat why Hounds was disliked up to a point (it was more a Gothic horror than a straight mystery...a comment I have read is that it resembles a Scooby-Doo episode).  However, I thought it worked well as something Hammer would have produced.  I did think that the plot itself wasn't up to what I have been told is Sherlock's ultra-high standards, but with some striking visuals and strong performances, I found Hounds of Baskerville a pretty good story.

﻿
Not so the other two.  A Scandal in Belgravia could have been good (the hallucinatory sequence involving the boomerang was a highlight), but the dual displeasure of sexism and homophobia didn't sit well with me.  Having Irene Adler turned into a lesbian dominatrix was bad enough (a woman who uses her body to literally and figuratively beat others), but her nude scene to stump Sherlock was to me a sign of degrading Adler.  She couldn't possible stump Sherlock with her mind, could she?  She could only stump him with her body.  If all that wasn't bad enough, this lesbian suddenly found Sherlock Holmes desirable ("Brainy is the New Sexy").  In other words, with the right man, even this lesbian could be turned.

Now let's put a coda on the insulting nature of how a woman's sexual orientation can be altered by the right man.  At the end, Irene needs to be rescued by Sherlock (perhaps in every way).  She, the only woman and one of the few people to outwit Sherlock Holmes, in the end couldn't overcome the man for whom she was Sherlocked by (itself an idiotic resolution that I had figured out long before The Great Detective, and which also had me boiling mad).  Adler's near-execution in Pakistan (a nation whose people don't shrink from stoning pregnant women to death in broad daylight for thinking for themselves) seems to be in Sherlock writer/producer Steven Moffat's world a model country for how to treat women (the election of Benazir Bhutto an anomaly).  Women are not men's intellectual equals if Moffat is to be believed (while I agree with him about how the Doctor shouldn't be a woman JUST to have a female Doctor--making Time Lords hermaphrodites--his manner of explaining this shows he has a low opinion of women in general).   Furthermore, women who prefer women sexually are really just women who have sex with other women because they haven't found the right man to have 'real' sex with.

How such a person can be celebrated and lauded as a 'genius' is a mystery to me.

This doesn't go into, like in Skyfall (another overrated work), the raison d'etre (the recovery of the incriminating photos of Adler dominating a member of the House of Windsor) is pretty soon forgotten, and tying Adler to Moriarty just came off as forced, something that never came to fruition.

The Moriarty-centered story to me was not just a disaster, but a mess that never made any sense.  Jim's wildly outrageous plot, like that of so many master criminals, depends on too many variables playing just right for it to work.  What if Donovan hadn't doubted Sherlock's abilities? No seeds of doubt would have been planted to have the police arrest Sherlock. What if the children had died?  Who would serve as a witness to 'Sherlock' being the 'kidnapper'?  Could Lestrade or Donovan ever work out how someone as well-covered as Sherlock by his groupies (with John Watson as his ever-so-loyal blogger) could have snuck into the boarding school to pull off this dastardly scheme?  Why didn't Donovan think Watson was an accomplice?

The Reichenbach Fall really makes no sense and one has to have an amazing amount of suspension of disbelief to accept anything in it.  As for the conclusion with having both Moriarty and Sherlock dead, I get a sense that whatever the actual resolution it will be so outlandish that in the real world it would be laughed off as beyond idiotic.  I cannot help being quite angry at how I am told repeatedly that both Reichenbach and Sherlock are these monumental works of genius when all I find is that everything is convoluted and insulting.

After going through two seasons of Sherlock, I am so disillusioned with the series.  I have tried, I have really tried to embrace this show.  I still find good things within it (Cumberbatch, Freeman, and even Andrew Scott as Moriarty).  However, on the whole I found that Sherlock will never find a place in my heart, and certainly never have me think that any of it will be better than Basil Rathbone or Jeremy Brett.

How I WISH I could love Sherlock.  I really do.  Unless Season Three really knocks me out, I will retire all thoughts that Sherlock is the greatest thing in television history, and will only cry about how Sherlockians are flocking to this show when they have the option of Rathbone and Brett waiting for them.


*Curiously, the Canon has an interesting continuity error.  The Final Problem was written in defense of Sherlock against accusations made by Professor Moriarty's brother.  Said brother's name was...Colonel JAMES Moriarty.  In short, the Moriarty Brothers share the same first name in Canon.  I put that as a mistake on Doyle's part, but why do I have the high suspicion that this other Moriarty Brother may be the reason for this...


...keeping in mind I have yet to see Sherlock Season/Series Three?

Next Episode: The Empty Hearse
Posted by Rick at 1:13 AM