It's been far too long since Gotham graced our screens.  How long: four weeks?  In any case, we are about to wrap up the first season of the Batman prequel (a second season already having been confirmed).  It looks like Beasts of Prey is the first of a continuing story arc that will make use of a new villain and guest star Milo Ventimiglia (late of Heroes, where the first season was the only one worth anything before the show collapsed on its own hubris).

The main plot involves the newest case Detective Jim Gordon (Ben McKenzie) takes at the request of a rookie officer, who says there are some newbies loyal to him.  It is a murder case, a young woman whose case has gone cold.  Gordon's partner, Harvey Bullock (Donal Logue) has no interest in this case, but as always goes along with Jim's investigation (especially if it means hitting bars).  Here, the investigation takes a sharp turn, as they learn that the victim they are investigating may be connected to the Gotham City Police Department's dirty little secret (which given how corrupt the GCPD is, is quite shocking in and of itself).  She is one of the many victims of a serial killer the force sometimes calls the Don Juan Killer, but is generally known as The Ogre.  The police don't have much on him: he appears to be wealthy, extremely good-looking, and leaves a calling card on his victims.  It's a drawing of a broken heart.

He also targets the loved ones of any officer investigating the case, usually killing the female closest to said officer.  This is why the Ogre's activities have never been publicized and all these killings are cold cases.  Gordon, being Gordon, won't let this go.  He will pursue both this case and Commissioner Loeb (Peter Scolari) who put up the young officer to the task fully aware that a.) the Ogre would target Gordon's loved ones, and b.) Gordon, being Gordon, wouldn't let this go.

We do get flashbacks to the crimes of the Ogre (Milo Ventimiglia), a charming, good-looking but highly possessive serial killer who is searching for unconditional love.  The women he keeps holding prisoner just don't measure up, so he has to kill them.

Back on the Island of Misfit Body Parts, our favorite mob princess Fish Mooney (Jada Pinkett Smith) plots to escape the clutches of Dr. Dulmacher (Colm Feore).  She's created an elaborate plan but which face complications thanks to The Catcher (P.J. Griffith), who shoots anyone who steps outside the clinic.  Mooney, being Mooney, hams up feigning ignorance, but she does appear to drop her mask slightly when confronting the bad doctor, suggesting that of all the people she's faced up against, he is the only one to genuinely terrify her.  She does escape, double-crossing a group of thugs to serve as a distraction while she and her group, including her loyal aide Kelly (Dashiell Eaves), but she does pay a price.

We also see young Master Bruce Wayne (David Mazouz) is beginning his hunt for Reggie Payne (David O'Hara), the man who stabbed Alfred (Sean Pertwee).  For that, he needs the help of Selina Kyle (Camren Bicondova).  Truth be told, Bruce needs all the help he can get, given that he takes Alfred's mention of finding Reggie in a 'shooting gallery' literally (him going to gun ranges).  Bruce and Selina do find Reggie, who tells them about being hired by a member of the Wayne Enterprises' Board to find out what Bruce knows.  Bruce has an opportunity to push Reggie out the window (Selina having dropped his drugs on a ledge), but he couldn't bring himself to.  Selina has no such hang-ups, and Bruce looks out to Reggie's body, wondering what the situations are. 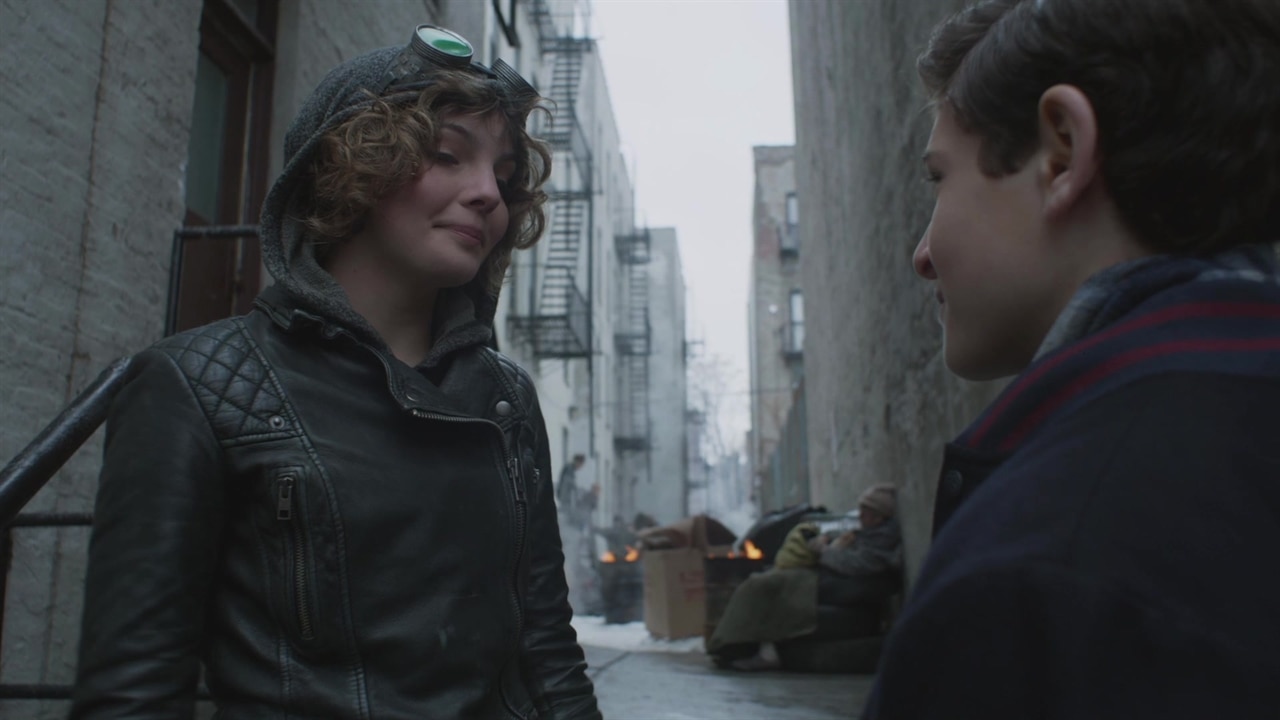 There were two aspects of Beasts of Prey that I don't think worked.  The first was the flashbacks to detail how the Ogre killed the particular victim Gordon and Bullock are investigating.   It starts with a bartendress telling them of the 'hot guy' the victim was with, but then we get more information than everyone else could have had.  I figure it had to be done this way to tell us the viewer about the Ogre, but I wasn't convinced it worked.

The second was the Mooney storyline.  I know many Gothamites (or "Citizens" as the fans are I think called) hate both the character and JPS' rather camp take on it all.  Now, I'm not particularly bothered by either: I always figured that Mooney was a little camp because that was the front she was putting up for the world.  I also know that we had to have a Fish Mooney-type to get the ball rolling with Oswald Cobblepot (Robin Lord Taylor), who provided the really creepy moments (more on those later).  However, this time it all felt like a major distraction.  One wouldn't be blamed for thinking that somehow someone had switched the channel to watch another show altogether.

And as a side note, not killing off Dulmacher would have been wrong if we want to think on the Dollmaker's future role in the Batman mythos.

However, Beasts of Prey was lifted up by all the other aspects.  We had such great pairings, particularly between Mazouz and Bicondova, who clearly have done wonders in creating a wonderful dynamic between the future frenemies Batman and Catwoman.   Mazouz' Bruce is taking his first steps to being the detective we know he will be, though he still has the naïve and almost innocent way to an upper-crust orphan.  When he heard Reggie would be in a 'shooting gallery', the concept of a drug den never entered his mind.  Instead, he went to all the gun ranges (and Citizens had a nice shout-out to the future when at one of them, Penguin walked right behind him, then got an inexplicable shiver).  It takes a Catwoman to show young Master Bruce the ways of the world.

They were wonderful together.  When Bruce finally finds Selina, she tells him she could have dropped a brick on him.  "Why would you want to do that?", he replies in a wonderfully innocent way.  As far as he's concerned, Selina is his friend, and friends don't drop bricks on friends.

However, when we see Bruce coming close to murder, we see in Mazouz's performance the moral conflict within him: the rage at the man who nearly killed his guardian and his own need to stop Reggie from spilling the beans versus Bruce's morality coming to play.  That Selina has no such qualms, and could push someone to their deaths, gives us so many insights into both Bruce and Selina, and both Mazouz and Bicondova are so good they do honor to the characters. 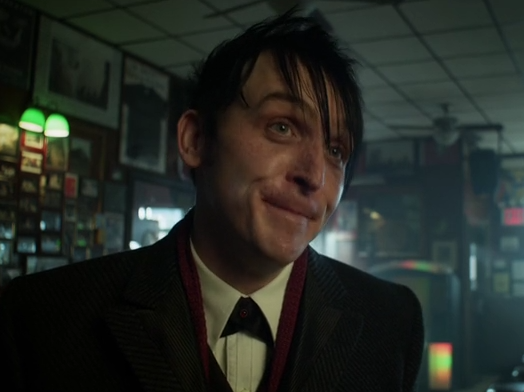 We also get the standard "Robin Lord Taylor is brilliant" performance as Oswald Cobblepot.  Seriously, why is his name not mentioned for Outstanding Supporting Actor in a Drama Emmy?  He never falters as the calculating Penguin, who here plots the murder of Don Maroni by becoming a silent partner in a bar Maroni frequents.  If it means torturing a poor musician whom the bar owner's mother doesn't approve for her daughter, so be it.   Birds of Prey is really quite violent for a prime-time network television show, going as far as one can go while keeping to Standards and Practices.  It's certain that if Gotham were a pay channel or Netflix-type show, it would be much more gruesome.  We see in RLT's performance the excellent combination of seeming weakness and manipulativeness.   "Madam, she will be home for Sunday Mass," Oswald assures Lydia the bar owner (Barbara Rosenbat).  Sunday Mass never sounded so threatening.  When Oswald tells his henchman Gabe (Alex Corrado), "Don't shoot them.  Lose them," when referring to the guitarist's fingers, we see just how cold Penguin is.

As the guest star, Ventimiglia (who could pass for Harvey Dent/Nicholas D'Agosto's brother) is perfectly cast as the suave but deadly villain.  It's clear his story will be a major one as we wind down Gotham's first season, and the cool but evil charm he exudes, how he doesn't go all psycho is an excellent performance: quiet but cold.

The other team of Logue's Bullock and McKenzie's Gordon continue to play well against each other, and it's fun to see how despite Bullock's jadedness he still goes along with Gordon's almost Dudley Do-Right's policing.

On the whole, Beasts of Prey is a pretty strong episode, though with a few hiccups.  We're going to see more of the Ogre (who I figure will wrap up the season) and slowly the pieces are being put into place: Penguin's plotting against Maroni, Bruce's investigation of the goings-on at Wayne Enterprises, and Gordon and Bullock's final case of the season.

Gotham, for all its seediness, is looking particularly ugly, and that's a great thing.

Next Episode: Under the Knife
Posted by Rick at 9:22 PM