Despite The Dark Knight Rises, I am not convinced that Tom Hardy is a real actor.   I know many people love his performance as Bane and think it among the greatest in film history.  However, I also think those people are excessively fanatical about anything involving Christopher Nolan's take on the Batman mythos.  Apart from a breakout role in Inception, Hardy has been in bad films (This Means War, Lawless, Star Trek: Nemesis) and been bad in them, mistaking monotone and moroseness for introspection.  Locke is his stab at serious, straightforward, deep acting: him performing with no one else on-screen, acting to various voices he speaks to (and speaking to himself).  It is actually a pretty good performance.  Pity it comes in a film too self-consciously gimmicky.

All performers save Hardy are heard, since as stated Hardy is the only person on-screen throughout Locke.

Ivan Locke (Hardy) leaves his job site, where he is suppose to be overseeing the largest concrete pour in British history not involving a nuclear plant or military installation and which he's devoted years to.  He does this without authorization, essentially abandoning his job.  It isn't to go see the football match on TV with his two sons and his wife Katrina (Ruth Wilson), who finally wore the team jersey.  Instead, it is because Bethan (Olivia Coleman), a very mentally fragile 43-year-old with whom he had his only one-night-stand, is about to give birth to his child two months prematurely.  Locke decides the right thing to do is to be by her side as she births his bastard.  There's a reason for this as we go through this long drive from Birmingham to London (which if I understand it is a little more than an hour or hour and a half's drive).

Ivan Locke himself is illegitimate, his father abandoning him early on.  Ivan will not let history repeat itself.  However, this does mean abandoning his job (from which he is fired), telling Katrina (which gets him kicked out of the house) and basically breaking his older son Eddie's heart (Tom Holland).  It's a long drive, and when he isn't on the hands-free phone to his family or to his various colleagues (who are basically enraged with him) he has a chat with his invisible and dead father, whom he imagines in the back seat.  Almost near the hospital, he hears the cries of his newborn daughter on the phone. 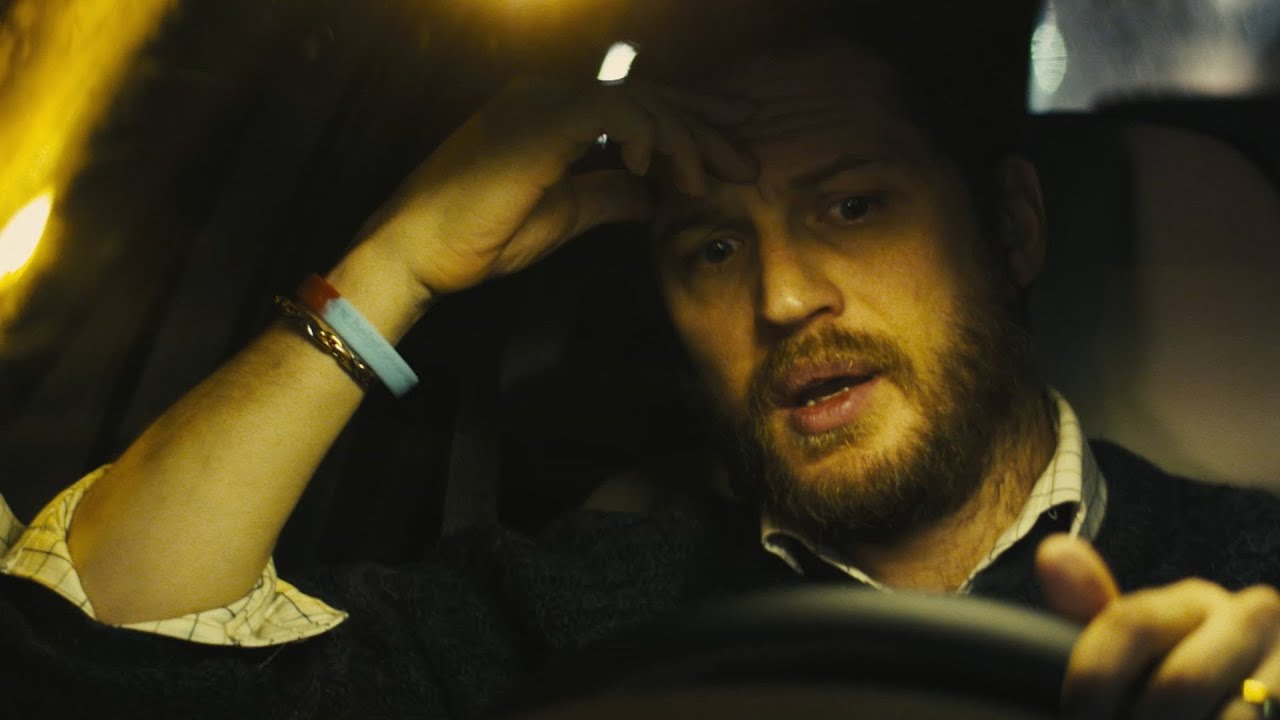 As I've said, I was surprised that Hardy gave a solid performance.  You see him working to be serious without being the usual Tom Hardy: morose, downbeat, a working-class bloke with too much on his shoulder.  Adopting a Welsh accent from what I understand, Hardy carries this odd mix of world-weariness and straightforward honesty that can be brutal.  Whenever the slightly hysterical Bethan calls, she keeps asking if Locke loves her.  "How could I love you?", he replies, making it clear that while he sees their drunken one-night-stand as a mistake, he, unlike his father, will be responsible.

Even if it means being irresponsible in every other aspect: throwing his nearly ten years with his company away (where he was seen as highly respected and efficient) and on the very night that his pet project was about to be finalized.  It also means not just telling his wife about his indiscretion, but having to be a bit shady to his two sons Eddie and Sean (Bill Milner), who love their father as they love their football team.

This certainly is a slightly different Hardy than I'm use to, someone who is really working to give a serious performance that is about character and not how stoic and beefy he can be.  Bless Tom Hardy: in Locke, he gives one of his best performances because he tries to act.

Does that mean that I think Tom Hardy is a real actor?  Sadly no, one self-conscious performance in a self-conscious film doth not a new Olivier make.  I think it shows that Hardy has great promise and potential (and is certainly much better than some of his contemporaries like Theo James or Gerard Butler) but he has yet to show he can be on the same level as his contemporaries James McAvoy or Michael Fassbender.  Hardy, at least in Locke, shows he can do good work, but it doesn't show he can make it as interesting as the film thinks it is.

For me, the issue with Locke isn't Hardy.  It's the scenario.  It seems a lot is going on in this fateful night, perhaps too much in writer/director Steven Knight's mind to believe.  A major part of Locke is that all sorts of issues arise while Locke is on the road involving this project (which itself is a bit too heavy-handed in its symbolism: the major construction sight about to fall apart as his life has).  The film is saying that because he wasn't there to ensure that all the I's were dotted and T's crossed the permits which would have had to have been secured months ago all suddenly were no longer active and the inspections were not done.

It seems a bit far-fetched that so many problems would arise so quickly without Ivan to oversee them.

I also found it hard to believe that his 43-year-old fling would go into premature labor JUST AT THAT MOMENT, and that it would also be at the same time as this football match the family was eager to watch.  That brings to mind something that Knight may not have thought of: his family was expecting Ivan that night, so he would not have been at the job site at a certain point.  Therefore, Ivan wouldn't have been there to physically oversee everything, at least for a few hours, so why everyone was freaking out due to his absence seems a bit outlandish.

Are people that inept that they have to leave everything on this billion-dollar-project to one man?

It also wasn't just the premise I wasn't buying.  It was the gimmick of the one-person-on-screen bit.  I think that for something to work, it has to be believable.  I also think it has to work in another way.  With Locke, I asked myself, would this work apart from the very conscious decision to make it a one-man show?  If this were real life, would I believe this premise?  If it were removed from the car, and Locke had to present himself to his wife and tell her the truth, and went to the hospital (as a side note, do they let people use phones in the maternity wards in the UK?  Their health care certainly is different than ours I guess), would it play as real?

My answer is no.  It all seems a little too convenient, too showy, too 'artistic'.  In short, the entire 'long drive with one person on screen' thing seems to be done just to be pseudo-creative, drawing too much attention to itself.

For that, I give Locke a mild reprimand.  It isn't Hardy's fault.  Like I said, bless Tom Hardy for stretching himself as an actor and working to get away from his usually growly tough guy (ever since he beefed up for Bane, he seems to have little to no sense of humor).  He didn't chuckle in Locke, but at least he wasn't the monotone his roles usually are.  I think the voice actors were pretty good, especially Holland as the disappointed son (Andrew Scott's hysterical Donal continues to show he can't not do camp in all his roles).

On the whole, good try Tom Hardy.  You may prove the actor you think you are yet. Pity the film is a bit more self-conscious about things than you are.