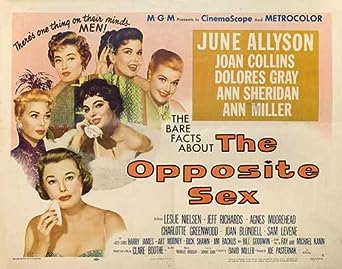 What we have in The Opposite Sex is technically speaking, a remake of the 1939 film The Women, with one minor change...


MEN appear in it!

Kay Hilliard (June Allyson), a retired singer better known as Kay Ashley, has been married for ten years to Stephen Hilliard (Leslie Nielsen), a Broadway producer.  As far as she's concerned, she couldn't be happier in retirement.  Unbeknown to her, Stephen has begun an affair with one of his showgirls, scheming vixen Crystal Allen (Joan Collins).  It isn't long till her Kay's frenemy Sylvia Fowler (Dolores Gray) 'helps' Kay discover the affair, but it isn't until Crystal throws it in her face that not only has she been seen Stephen, but even spent time with their daughter Debbie, that Kay strikes back.

Literally: the slap Allyson lays on Collins would have shocked even Alexis Carrington.  It was so hard that Collins' earring flew off her ear!

It's off to Reno on the Divorcee Express, where Kay meets among others, the Countess de Brion (Agnes Moorehead), wry wisecracking Gloria (Ann Miller), and to her surprise later on, Sylvia herself!  Sylvia is none-too-pleased to see that Gloria is about to be the new Mrs. Fowler.  She, however, has found new arms: that of hunky ranch-hand Buck Winston (Jeff Richards), who uses his Western charms and "Ma'am" deference to win the randy Sylvia.  Sadly, Stephen marries Crystal right after the divorce is final.

A year passes, and Crystal is making everyone's life miserable.  Kay has made a comeback, and has learned to let go.  Her Reno friends have been a great support, as has her steadfast ally Amanda Penrose (Ann Sheridan), a noted playwright.  Sylvia, so besotted with Buck she's determined to make him a country & Western singing star (down to funding his club act), is unaware that Crystal now has designs on Buck herself (though Sylvia knows Crystal is now fooling around on Stephen).  Kay discovers this herself, and plots her revenge on both Crystal and Sylvia by casually letting tidbits slip out at Buck's debut.  Crystal, thinking she's managed to pull another fast one, dumps Stephen, only to find Buck isn't the marrying kind, and Stephen and Kay reconcile.

I confess to not being a June Allyson fan.  I was reminded that Allyson did Depends Adult Diaper commercials, which I find oddly amusing.  I never got why exactly she was so popular, particularly as a singer, finding her voice rather rough and reminding me of a foghorn.  Actually, I think the same about her speaking voice too.  I also thought that she never was fully able to convince me that she was this changed woman, from the somewhat docile wronged woman to the clever and shrewd avenging angel.

This, if Joan Collins is to be believed, was her first 'bad girl' role, and I think she tried a bit too hard to be this smarmy bitch.  She wasn't going to be a pleasant person, but I don't think Collins was completely convincing at even faking being pleasant (her scene with Debbie oozes insincerity when perhaps a softer touch would have worked).

A lot of the women I think tried too hard to play up their respective roles.  Allyson I think did, and so did Collins, and so did Gray as the forked-tongue Sylvia (which made her catfight with Gloria not as funny or vicious as it could have been).  Granted, I LOVE a good catfight, so I'm not complaining too much.

One thing I just don't get about The Opposite Sex (well, there's a lot I don't get, but that's for another day) is why they opted to put in big musical numbers that don't really help the story.  Sure, we get moments that highlight Allyson's singing (if you want to call it that), but what was the point of the title number with Dick Shawn and Jim Backus.  Not only was it a bit irrelevant to the movie (though it was integrated as being for a big benefit the Hilliards were throwing), but if you thought about it, the number was simply too big to fit on a Broadway stage.

It IS surprising to see Nielsen, who in his later career was all about broad comedy, as the straight lead.  He did a pretty solid job at playing the at-times conflicted husband, though his disillusionment with Crystal wasn't, again, completely convincing.

The supporting players of Miller and Moorehead had a ball playing broad broads, and Richards was effective as the hunky, sleazy Buck (his aw-shucks persona notwithstanding).  There was one funny moment when Buck attempts to seduce Kay, and even though it's clear where it's going (she swims to safety, leaving him stranded on his canoe without a paddle), both played that rather well.

In fairness to Allyson, while she won't make my Favorite Actresses List, she did handle the dramatic moments well.

I found The Opposite Sex to be a bit confused about what it wanted to be.  The opening title cards (Manhattan Island--a body of land consisting of four million square males--completely surrounded by women) made it look like a broad comedy, and Sheridan's voice-over began the story.  However, that was dropped pretty quickly, leading one to wonder why it was introduced to begin with.

On the whole, while I like The Opposite Sex, I prefer The Women.