The Oscar That Got Away

For the 27th Academy Awards, we have a total shut-out to perhaps one of the greatest films on Hollywood ever made.  Following in the footsteps of Sunset Boulevard, the musical version of A Star is Born burned out at the Oscars, losing all six of its nominations.  The sad story of how the film was butchered by being reedited to where the eventual released version became incomprehensible, the mess Warner Brothers made of its own production, and the shameful way Judy Garland was treated on Oscar night (by both the NBC crew and the Academy) makes the whole ceremony all the more sadder to contemplate.

From A Star is Born, The Man That Got Away, music by Harold Arlen, lyrics by Ira Gershwin.

Judy Garland was I think one of if not the best at selling a song, at making it as rich or powerful or tender or moving as humanly possible.  The Man That Got Away is a torch song deluxe, starting slowly then building to a fierce intensity.  Who HASN'T felt this way (and for the guys, there's The Gal That Got Away).   Despite me being a guy, I think the female version is better.  Still, I'll let you decide.


With apologies to Sinatra, I think Bobby Darin's version is better.

Still, despite my great love for The Man That Got Away, if it were up to me, I would not have chosen it when there was another song from a film that year that I think does surpass it.  My nominees with my winner...

As much as I think The Man That Got Away is one of THE great songs of film, my heart and choice for the Best Song of 1954 is A Whale of a Tale from 20,000 Leagues Under the Sea.  Music and lyrics by Norman Gible and Al Hoffman.  It's a cute, whimsical little number, a bit of levity in a rather serious action/adventure feature.

That, and the fact that I really, really like it.

For the longest time I had my beloved Alfred Hitchcock as the winner.  Certainly Rear Window is a brilliant film, and he was a brilliant director, and Rear Window is one of his greatest films.  For me, it's still a fierce competition between Hitchcock and Elia Kazan, but after having seen it again recently, I can't help think that in terms of performances, Kazan did something extraordinary with an extraordinary cast (Brando, Saint, Malden, Cobb, Steiger...what a collection of brilliant actors).  After some struggle, I opted to go with the Academy's choice.  It wasn't an easy decision, but Kazan got my vote based on the performances he got out of his cast.

However, when I think about the scope of the filmmaking, and in terms of the individual performances, I don't understand why George Cukor, one of the best and most respected directors in Hollywood, was not even nominated for A Star is Born.  Perhaps it was because, like Sunset Boulevard, it hit too close to home.  Perhaps it was because Warner Brothers so butchered the film that what the public saw was nowhere near Cukor's masterfully crafted vision (there is still hope, however vague, for a full restoration).  However, look at the performances from Garland, from Mason, from Carson, from Bickford, from Noonan, and you think...Cukor was a damn fine director. If anyone can make the case for Nina Foch taking the Oscar, please do so.

Once again, we see two actresses from the same film cancelling each other out.  I think it's a pretty safe bet that if you find yourself competing with your costars, it's pretty much over.  Rare is the moment when an actor/actress from a film beats out his/her costar.  It's happened a few times, but the general rule of thumb is that more often than not, they both lose.

Having said that, I think the Academy made the right choice with Saint's debut as the victim's sister determined to find the truth.  We forget that On the Waterfront 'introduced' Eva Marie Saint, but she gave a brilliant performance.  I find nothing wrong with the choice.

So what if I put two costars in competition myself?  What's sauce for the goose...

As it stands, I can't understand why one of Thelma Ritter's many Oscar nominations (a total of six, with all six being losses) wasn't for Rear Window.  As the cynical physical therapist who finds herself wrapped up in a suspected murder investigation, she brought her trademark wit to the proceedings.  Anyone who can call Grace Kelly's character Miss Fremont, "Miss Freemoney", without letting on she is making a pun, deserves special recognition. 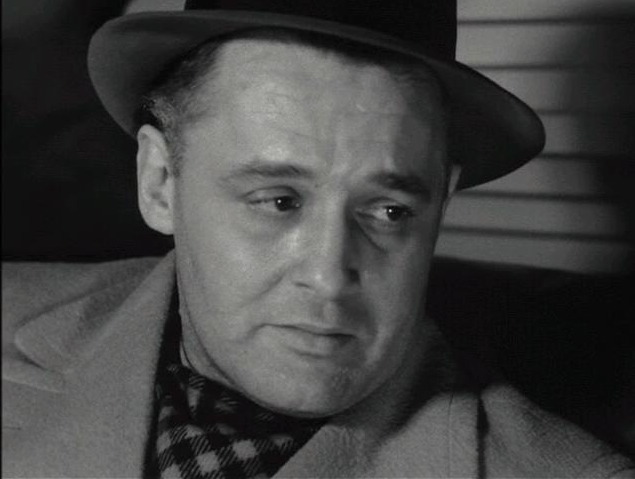 With THREE nominees from the same film, is it any wonder the now-forgotten O'Brien won in the now-forgotten Barefoot Contessa?  When was the last time YOU reflected on how good either were?  With each of the three actors from On the Waterfront being just so good, really, how can one pick?  I flipped around a lot between the three of them, and ultimately went for Charlie, the older brother torn between his brother and his 'brothers'.  My reasoning was this: Malden's priest was all good, Cobb's Johnny Friendly was all bad, but Charlie was stuck in the middle.  It was the inner conflict that attracted me to pick Steiger. Mason had a banner year in 1954.  He was brilliant as the washed-up Norman Maine in A Star is Born, but even more amazing as Captain Nemo in 20,000 Leagues Under the Sea.  He was urbane, intelligent, raging, and insane...sometimes all at the same time.  You both empathized with Nemo and were horrified by him, yet understood his fury.  He was enigmatic and compelling, and I think one of Mason's best performances.

First, the fact that Dorothy Dandridge became the first African-American woman to receive a Best Actress Oscar nomination is something to note and respect.  Of course she wasn't going to win, and if she thought she was, then she was naïve at best.

I wrote earlier about the shabby treatment Judy Garland received on Oscar night, but it sadly extends beyond her surprising loss.  Garland had gone for broke as Vicki Lester in A Star is Born, showing she could handle both the big musical numbers and the intimate dramatic moments.  She was the odds-on favorite to win, but in comes the elegant Philadelphia beauty to sweep Oscar into her elegant handbag.

Grace Kelly's performance in The Country Girl perhaps is good, but I think that compared to Garland, it's not remembered in the slightest.  The Country Girl itself is pretty much forgotten, while A Star is Born is still held as one of the best films from Cukor and Garland.  Kelly did what a lot of actresses do to get Oscars: play against type.  The cool blonde, epitome of Alfred Hitchcock's erotic fixations on cool blondes, played the mousy, put-upon wife of a drunk.  I haven't been overwhelmed by the clips of her I've seen, but again, they're clips, not the whole film.

Garland was such an odds-on favorite to win that a camera crew was set up in her hospital room to record her reaction when she won, having recently given birth to her son Joseph Luft.  All wired and ready to go, when William Holden announced Kelly as the winner, the crew immediately began packing up the equipment, leaving a devastated Garland doubly humiliated.

Perhaps the miniseries Me and My Shadows: Life With Judy Garland was a bit harsh in declaring Kelly a nymphomaniac ("only when you can get her to slow down", Garland added) and in their summation that Kelly "can't act", but it seems accurate about how the NBC crew treated Garland when her spectacular bid for a comeback failed spectacularly.  It also might have put the finger on why she lost: as her confidant Roger Edens told her, she'd burned too many bridges.

Despite Edens and Garland's disparaging assertions that Kelly was a talentless slut who slept her way to the top and to an Oscar, I think she did an excellent job staying true-to-form in Rear Window.  That being said, Garland still gave the best performance of the year, and her loss will rank among the worst decisions the Academy has made (right up there with Crappie Redmayne's robotic Stephen Hawking.  What, you thought I WOULDN'T take at least one jab at him?)

You'd think this would be an easy call, wouldn't you?  Brando redefined screen acting, and On the Waterfront is one of his singularly greatest performances.  Yet, I confess that for the longest time, I had Mason take it for his decent but highly flawed and tragic Norman Maine, the matinee idol who cannot face the end of his career.  I also see Bogart giving Brando a run for his money, and even Crosby as the washed-up drunk singer having a go at it.

Nevertheless, I went with what I think is a brilliant performance, which leaves just one question:

That question has to be asked when you consider that James Stewart was left off the list.  I don't think Stewart was nominated for any of the films he did for Hitchcock, which makes one wonder what the Academy had against The Master of Suspense.  Stewart had to act within a very limited space.  He couldn't wander around, and it is through his eyes, his face, that he communicates his growing obsession with what goes on behind closed doors.

Really, it is one of his landmark performances, and to think the Academy didn't recognize it while leaping praise on Crappie Redmayne? 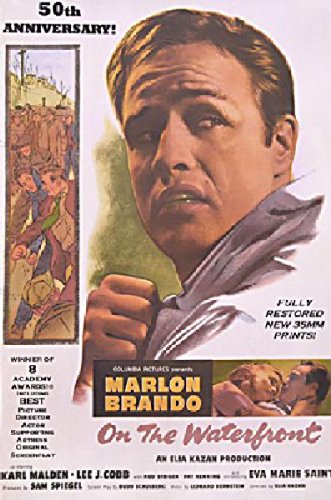 For me, out of the nominees, there really is no contest.  On the Waterfront continues to be one of the Great Films, while the others are if not strictly forgotten not as well-remembered.  OK, so The Country Girl is pretty much forgotten, and people may not remember Three Coins in the Fountain was a film and not a song.  I can imagine the uproar if Seven Brides for Seven Brothers had ended up winning.  I for the life of me don't understand why it was nominated in the first place.  Maybe the Academy felt that there should be at least one musical nominated every year (sometimes with disastrous results...*cough*Oliver!*cough*).  I think the power of On the Waterfront cannot be denied, and the Academy actually chose correctly out of the films it nominated for Best Picture.

20,000 Leagues Under the Sea
On the Waterfront
Magnificent Obsession
Rear Window
A Star is Born

That of course, doesn't mean there's room for improvement.  The brilliance of On the Waterfront cannot be denied.  Note that out of the actual nominees, it is the only one I think still worthy of consideration (seriously, Seven Brides for Seven Brothers?).   That being said, I'd be happy with any on my list winning, but for me, out of all of them, one really pushes its way to the top.  My beloved Hitchcock was overlooked so many times, and frankly, so were his films.