The Heiress: A Review

If anyone ever has an Olivia de Havilland binge-watch, The Heiress is probably one of at least two films they would have to have (the other: Gone With the Wind).   It is the film which earned her the second of two Best Actress Oscars.  I cannot say whether her first Oscar for To Each His Own was warranted, but in regards to her second, the centenarian more than deserved it.  The Heiress is a brilliantly acted and directed film, a bit stagey perhaps but nonetheless a remarkable piece of filmmaking.

Dr. Austin Sloper (Ralph Richardson) despairs over the future of his very plain daughter, Catherine (de Havilland).  She is a very wealthy woman in her own right, and will be much wealthier when Dr. Sloper dies.  However, Catherine pales in comparison to his late wife: she is rather plain, with no conversational skills and limited social graces.  Moreover, Austin constantly lets Catherine know she is not like her mother at all.  Catherine's Aunt Lavinia (Miriam Hopkins) also despairs for Catherine, but holds hope her niece will find someone, anyone, who can love her.

Enter Morris Townsend (Montgomery Clift), a dashing young man who appears attracted to the plain, shy, naïve young woman.  He has, in Dr. Sloper's estimation, only "a handsome face and figure and a very good manner" to offer, and is convinced that Morris is nothing more than a gold-digger.  He tries to dissuade Catherine, who is too deep in love with Townsend to believe him.  Furthermore, his very bad manner with her, blunt with no real love to express, only hardens her views.  Austin takes her on a European trip to get her to forget the only man who has given her the time of day, but nothing doing. 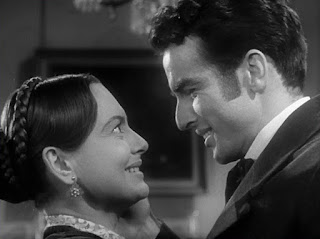 It doesn't hurt that Townsend has ingratiated himself so thoroughly with Aunt Lavinia.  When they get back to Washington Square, New York City, Lavinia has conspired to help Morris elope with Catherine.  Dr. Sloper threatens to disinherit Catherine, but she is simply too much in love.  She also has her own smaller fortune.  Catherine spots Morris and suggests they elope that very night, even if it means sacrificing her father's fortune.  He says he will, and she quickly packs her bags for a midnight flight to freedom.  Lavinia comes upon her niece, waiting for the carriage, and waits with her...and waits...and waits.

Catherine has been abandoned by her lover.

The chill Dr. Sloper came down with in Europe is fatal, and he knows it.  Catherine, who rages at her father over his mistreatment of her, his constant belittling of her, and of her own lost love, will not come to him in his final hours.  However, Sloper did not disinherit her, and she becomes a very wealthy woman.  Catherine appears to have moved on, but does she still have feelings for Morris?

Now is the time to discover that, about five years later, when the ever-hopeful Lavinia tells her niece that Morris has returned, him having taken flight to California.  Morris is still poor, but he returns with more words of love.  He begs her forgiveness and tells her he ran away that night because he could not be the one responsible for her losing her fortune.

Catherine takes this all in, and agrees to elope with him again that night.  However, in the tradition that revenge is a dish served best cold, Catherine quietly plots her own revenge on one she observes has grown greedier with time.  "First he wanted my money, now he wants my love too," she remarks to her shocked aunt.  The heiress will finally lock her heart...and bolt the door. 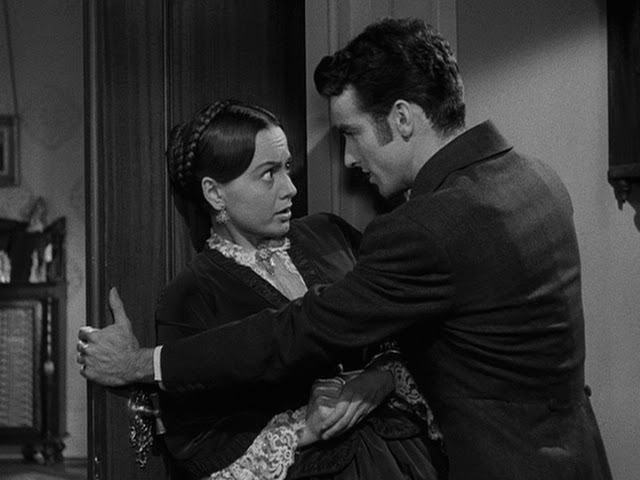 The Heiress is made infinitely richer due to the performances.  This is Olivia de Havilland's finest hour as an actress, and while her Melanie in Gone With the Wind is better know, The Heiress showcases her at her finest.  She is perfect whenever Catherine has to be hesitant, shy, aware of how people can be cruel due to her plain nature.  Early in the film, she is abandoned by a man at a party, and when she sees him dancing with a prettier girl when he had told her he was getting her punch, the mix of hurt and overwhelming shyness breaks your heart.

However, once she finds her own voice, we see that the tigress lies beneath the soft, weak exterior.  When she and Townsend reunite and he appears at first hesitant to run off with her right away, there is an edge of anger to her voice.  This tightening of her voice, along with her face when she strikes back at her disapproving father and Morris' return, signals to us that Catherine has been made wiser through bitter experience.  She is brilliant in her anger, and seeing that evolution is a fascinating piece of acting.

Equal to de Havilland is Richardson as her disapproving father.  In a certain way, Dr. Sloper was not evil.  He did care enough for Catherine to be wary of Townsend's intentions, but his manner was so awful that you tended to root for someone who was almost obviously a bad man.  In turns endearing and patronizing, Richardson is just so good as the doctor who knows his daughter is not his wife's equal and lets his flesh and blood know it in ways overt and subtle.

Looking at Montgomery Clift, despite the somewhat obvious nature of Morris' sleaziness, you could believe just about anything that shockingly handsome face tells you.  His role was very tricky, as he had to make us believe that maybe, just maybe, Morris was genuinely in love with Catherine, while also suggesting that perhaps he was what her father knew him to be: an opportunist who was a fortune hunter.  Clift managed that balance pretty well, leaving slight room for him being wicked or just a desperate young man in love.

Hopkins was all fluttery as Lavinia, but that was how the role was, so she did it correctly.

In other aspects, you have Aaron Copland's brilliant Oscar-winning score to suggest the tenderness of the failed love story and the genuine anger within Catherine.

If there is a flaw within The Heiress, and it's a minor one at that, is that director William Wyler made the film a bit too stagey, bound to its theatrical roots.  Sometimes the film looks like a filmed version of the play, even when the characters were suppose to be away from the confines of the square.

As much as I dislike remakes I think The Heiress is one that could be remade if they had the right cast & crew behind it.  I'd like my love Mia Wasikowska in the de Havilland role.  As for who could play the Montgomery Clift role, I cannot think of an actor who is both handsome and talented enough.  Suggestions welcome.

The Heiress is a bit stagey but despite that the film moves well with top-notch performances from three great actors.  Olivia de Havilland creates a tough woman beneath that soft exterior, one who leaves us wondering up until the end whether Catherine will fall or rise.