Miles Ahead: A Review 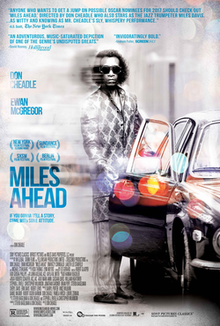 I understand that writer/director/actor Don Cheadle has been dreaming of making the life story of legendary jazz artist Miles Davis into a film.

Sometimes dreams don't turn out the way we want them.

For a film that yearns, if not demands, that it be 'radically different' from a standard biopic, Miles Ahead picks a rather generic and uninspired title for such a subject, drawing from one of his albums when calling it Bitches Brew or Kind of Blue would have sufficed.  The film itself is determined to be as experimental and improvisational as Davis' best work.  The end result is a film that becomes far too impressed with itself, trying too hard to be as wild and inventive as Davis but failing just about every step of the way.

Bookended by a faux-interview with Miles Davis (Cheadle) as he emerges out of self-imposed musical reclusiveness, we wander throughout the rest of Miles Ahead as if a deranged dream, with not much rhyme and reason as we flip around left right and center through two days in Davis' erratic, drug-fueled crazed of a life.

As Davis holes up in his mansion, calling up DJs who dare compliment his music, enter Rolling Stone Magazine reporter Dave Braden (Ewan McGregor).  He insists that he's there to write an article about Davis' 'comeback' with help from Davis' record company, Columbia.  Davis is not just angered by Braden's work but by the notion at Columbia that a.) he would agree to be profiled, b.) that he was making a 'comeback', and/or c.) he would even release his super-secret recordings to Columbia.

So, what's a musical genius to do?  Drag his faux-Boswell to Columbia and wave a gun about threatening to blow everyone out.  Only Harper (Michael Stuhlbarg), an A & R man, dares stand up to him, calmly telling him that legally, Columbia owns all of Davis' work.

Well, Davis tolerates Braden because he can get him great coke at a discount (as everyone knows who Miles Davis is and is in awe).  Davis is surprised to find a party at his mansion, unaware he gave permission to a girlfriend to have one.  As he continues with Braden, Harper and his protégé, Junior (Lakeith Lee Stanfield), also crash the party, Harper determined to get Junior an informal audition with Davis.  It's here that Braden, at first wanting to steal Davis' newest tracks to give to Columbia in exchange for an exclusive, leaves the desk drawer unlocked.  In turn, Harper and Junior see the master disc, and decide to get in good with Columbia by bringing it to them without Davis' knowledge or consent.

Davis, enraged that someone has his master tape, drags Braden along to help him recover it, taking Junior hostage, getting involved in a shootout with Harper (resulting in Davis' own gunshot wounds) and ultimately getting his tape back.

This synopsis is actually more structured than the film itself, with intercuts this story with various scenes of Davis' tempestuous relationship with his first wife and great love, dancer Frances Taylor (Emayatzy Corinealdi).

﻿
Miles Ahead is remarkably artistic, but in a bad way.  We get this right from the beginning, when the camera moves all over the place to capture the 'authentic' look of the Davis interview.   Time and again Cheadle goes all-out in making Miles Ahead all the more bonkers and 'artistic'.  The nadir of this is when we get the final confrontation between Davis and Harper.  We have about three or four things going on simultaneously: the shootout, the image of Frances fleeing from a colliding memory of her fleeing her abusive, deranged husband who thinks a man she is having an affair with is hiding somewhere in his mansion, and Cheadle as a younger Davis playing his trumpet INSIDE THE RING and serving as the music for all this lunacy.

For me, this was perhaps the final straw in enduring what I saw as an overabundance of excessive artistry.  I'm not opposed to doing something different with biopics (Frida for example, was more impressionistic, or should I say, surreal, than straightforward, and even something as weak as the Dali/Garcia Lorca biopic Little Ashes was more successful in its mix of art and biopic), but Miles Ahead went so far off the deep end that it becomes almost incomprehensible.

There's a moment when, after threatening to shoot the Columbia executives, Miles is in the elevator, then pushes the back of the elevator wall and ends up going back to his younger self in concert.  I found it all a bit self-indulgent and self-consciously artsy.  Same goes for when Miles beats Frances: Davis' music (at least I think it was Davis' music) drowns out the slowed-down screaming match.

Bits of information pop in and out but are either completely forgotten or left there.  We get a quick mention of a degenerative hip disorder that affects Davis, but that isn't what is making Davis limp (that would be the gunshot wounds he got), and this is just thrown at us, never mentioned again or made of any importance.

It's a shame that Cheadle as director and cowriter (with Steve Baigleman) couldn't tone down the excessive artistic manner of Miles Ahead because underneath there are some strong elements in it.  There's Cheadle as actor, who was compelling to watch as the eccentric musical genius in his reclusive stage (as Braden observes, "music's Howard Hughes...reviled and revealed").  I also thought well of Corinealdi as the loving yet suffering Mrs. Davis, who did excellent work for a limited role.

Sadly, McGregor, one of my favorites, was nothing more than an entry into this bonkers world, and I couldn't help think he reminded me of James McAvoy's role in The Last King of Scotland, essentially the white lead who observes the crazy title character.

Miles Davis was a true musical genius.  Don Cheadle is a great actor.  Somehow, however, things didn't pan out to where the meeting of the two worked.  Cheadle loved the whole project enough to invest his talents and money, and take on roles of cowriter and director.  The last two should have been handed over to someone else.

Excessively artsy, overdone to the point of almost comedy, Miles Ahead has good work from Cheadle as an actor and that wonderful Davis music.

Apart from that, Miles Ahead is anything but.