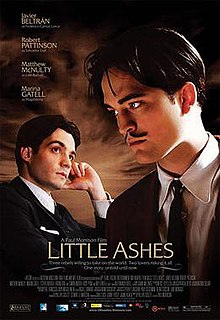 You have one of the greatest and most outrageous painters of all time. You have one of the most innovative and controversial filmmakers of the Twentieth Century. You have one of great poets and writers who literally died for his country. Out of that maelstrom, with all that creative genius within it, you create a simple romance about suppressed desires where all the creativity of Salvador Dalí, Luis Buñuel, and Federico Garcia Lorca is frankly not important. Little Ashes is serviceable and artsy, like its characters, and while not as good as it could have been, it does have its moments.

It is 1922 Spain. Luis Buñuel (Matthew McNulty) and Federico Garcia Lorca (Javier Beltrán) are avant-garde students, bucking the conservative system to which they live and study in. Entering this world is Salvador Dalí (Robert Pattinson), an odd character even by their standards. Dalí soon finds himself in the throes of their world, on of art and revolutionary thinking, the genesis of Dadaism and Surrealism.

Garcia Lorca is a divided soul: both fervently Catholic and yet filled also with strange sexual desires, at least strange to him. Garcia Lorca soon finds himself physically attracted to Dalí but prays for strength to resist temptation. However, the pull is too strong, and while visiting Dalí in his home in northern Spain, they achieve a remarkable level of intimacy given Dalí is suppose to be straight. While swimming together at night, under the serious moonlight (as David Bowie might say) they finally reveal themselves to each other with the tenderest of kisses. This, however, was the briefest of encounters, for while Garcia Lorca is willing, Dalí constantly hesitates, as if he can't quite bring himself to give himself over to Garcia Lorca's emotional and physical entreaties.

Buñuel, while only suspecting what's going on, is disgusted by all this and pulls away from them. Dalí moves to Paris to pursue his art, but Garcia Lorca can't move away either physically from the land he loves or emotionally from the man he loves. Eventually, Garcia Lorca is driven off when Dalí and Buñuel collaborate on the film An Andalusian Dog, which the proudly Andalusian Garcia Lorca believes is somehow mocking him.

We move quickly to 1936 Madrid. The Spanish Civil War is upon us, but for all their talk of revolution both Buñuel and Dalí are quite comfortable to let others fight the battles they've called for. It is only Garcia Lorca who continues speaking out against Fascism. Dalí and Garcia Lorca do reunite when the former invites the latter over for tea. By this time Dalí is a celebrated artist, and married to Gala (Arly Jover).

Garcia Lorca, who has not married, is shocked not so much by his erstwhile lover going straight but how comfortable he seems to be with the idea that General Franco and his Fascist become rules of Spain. He leaves him to his 'bourgeois' respectability. However, the Fascist seize Garcia Lorca, and we learn that he is executed while Buñuel parties in Paris and Dalí paints. While both are shocked and saddened by the murder of their friend, only Dalí sees the world in black, to become the even stranger public persona he became.

Little Ashes has the odd situation of being about three famous artists but not delving into their actual creativity. We rarely get to see Dalí paint or Garcia Lorca write. In fact, I don't remember Buñuel ever doing anything creative, though he talks a good game (perhaps like in real life, but given I haven't seen any of his films, perhaps I'm being a bit harsh). 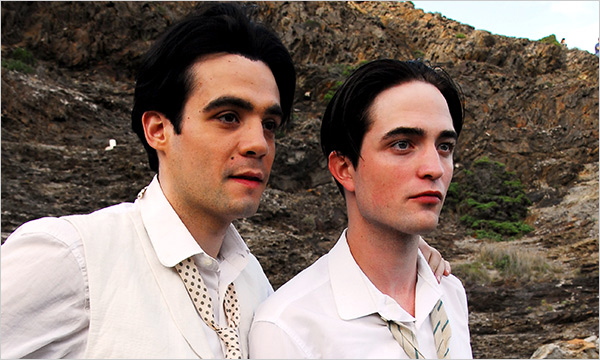 Instead, it is about one man's homoerotic obsession with another who is either teasing him or who has some feelings for him but isn't quite sure what they are. In short, we don't ever get a full idea of what drives the artistic visions of any of them. In retrospect, it may not be the intention of screenwriter Phillipa Goslett, and I'm going to take a guess that it wasn't.

Instead, I suspect she was much more interested in the romantic ideas Garcia Lorca had about Dalí, and perhaps, how Dalí's rejection affected Garcia Lorca. I say 'perhaps' because again, we don't really see much beyond the surface, don't get a view into any of their internal thoughts or feelings.

I give credit to director Paul Morrison for doing a lot with what appears to be a budget of zero. There are one or two montages (particularly of when Dalí is in the throes of decadent Paris) where it looks like great economies were taken. Given that this was a smaller-market film, and one based on a more artistic interpretation of events, we can forgive the fact that scenes and sets didn't look like had major budgets. His directing of two of the leads was also quite effective.

Beltrán, the only actual Spaniard in Little Ashes, creates a man haunted by his desires but unable to have the love of his life return the ardor he feels for him. Beltrán doesn't have to be overt about how he falls in love with Dalí, but does it with subtlety. At a puppet show his glance at Dalí tells you all you have to know about how friendship turns into love and then through Little Ashes turns to passion and even unrequited obsession.

Given that Castillian is his first language (Spaniard are quick to point out they don't speak 'Spanish' but Castillian), Beltrán handled speaking Garcia Lorca's poetry beautifully, and he says it with a fine voice, although the English translation is soon spoken over it all the time, to the point where it would have been better if Beltrán had just said it in English to begin with. Often, Beltrán's Garcia Lorca is a forlorn man, one who isn't given to shouting and raging but is soft-spoken, even when calling on his former friend/love interest to take a greater interest in the plight of the people.

McNulty (British), handled his Castillian accent remarkably well, though the character of Luis Buñuel had very little to do with the actual love story McNulty showed the violent side of Buñuel, up to perhaps being quite homophobic.

This brings us to Robert Pattinson, he of EDWARD CULLEN from the Twilight series (excuse me, SAGA). As EDWARD CULLEN, Pattinson has shown a distinct inability to act. Curiously, Little Ashes was released in the U.S., admittedly in a limited fashion, six months after Twilight (or as it should be called, The Twilight Saga: Twilight, given the predilection of that film series to be rather pompously titled The Twilight SAGA: This-That-Or-The-Other).

To my mind, it indicates Pattinson's desire to be taken seriously as an actor, and what can be more serious than in playing a potentially homosexual or at the very least, bisexual character who is also a crazy genius. I give Pattinson an A for Effort, because he does try for something different. He almost gets me to believe he can act, and perhaps he might have some potential.

However, when he tries to capture Dalí's offbeat oddity Pattinson can't stop trying to do anything other than opening his eyes as widely as possible and make faces, as if Dalí's persona is the sum total of Dalí the man. While that is how Dalí is remembered now, right down to his loony mustache, Pattinson never got into what shaped Dalí to become the Dalí we all know today.

Still, on the whole Pattinson did the best he could. The fact that he is in Little Ashes at all is what brought the film what little attention it got, and it shows Pattinson wants to be an actual actor. Granted, he has a ways to go, but on the whole he gives his best work in Little Ashes; then again, that isn't saying much.

Little Ashes doesn't capitalize on the coming together of three great artists, reducing their interactions to a simple love/lust story among two men. Still, it's not a bad film. Perhaps with a greater budget it could have achieved its artistic aspirations. Little Ashes tells its story with the appropriate artsy aspects and with good performances by two of the leads (and a good try by the third), it's a decently made film no matter how it's spread out.