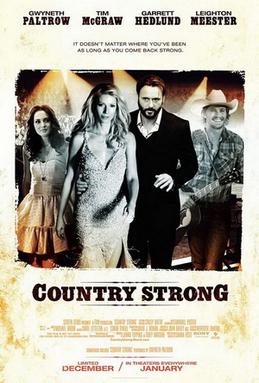 Country Strong has some surprises, the biggest being that three people not known for being singers (Gwyneth Paltrow, Garrett Hedlund, and Leighton Meester) are surprisingly good country singers, while the only legitimate country music singer in the film (Tim McGraw) is a surprisingly good actor. It appears to be a trend (perhaps the Glee Effect?) in film today where actors are now leaping into using their own voices to carry a tune, akin to how stars in the "Golden Age" of American films were able to both act and sing.

We had Jeff Bridges sing country in Crazy Heart, and now we have a Shakespeare girl, Tron, Jr., and a Gossip Girl belting out their best Merle Haggard and Patsy Cline renditions. Certainly the Country Strong soundtrack is worth getting, if perhaps not the film itself.

Kelly Canter (Paltrow) has just been let out of rehab early at the insistence of her husband, James (McGraw). This early release is opposed to by the rehab attendant she's grown close to, Beau (Hedlund), who is a struggling country music singer himself. James is determined to have Kelly make a comeback, but they need an opening act. Kelly wants Beau to open for her (in every way imaginable) but James is enchanted by a pretty chanteuse, Chiles Stanton (Meester).

In spite of Chiles' terrible stage fright, James puts her on the tour bill, and under the guise of having him as Kelly's sponsor, Beau comes as well. As the tour around Texas: Houston, Austin, and Dallas (the place where Kelly had a major drunken meltdown with tragic consequences that caused her to go to rehab in the first place), the players play Sexual Musical Chairs, Kelly falls very hard off the wagon and we have the triumphant Dallas Comeback show, but with a big and to my mind unexpected twist that bring Country Strong down. Way Down.

Country Strong has a few plot points from writer/director Shana Feste that didn't quite make sense. First, we never figure out why Kelly is upset that James would take a shining to Chiles (though we never actually see them in a compromising position) but she seems unconcerned about having an affair with Beau (which would have to have started while she was in rehab). Like a few things involving Country Strong, we have to take guesses as to where/when things started/ended in regards to the character's lives. We don't really know Beau's motivations for being with Kelly or Chiles for that matter, apart from the fact that he's a gruff-voiced hunk who likes women. 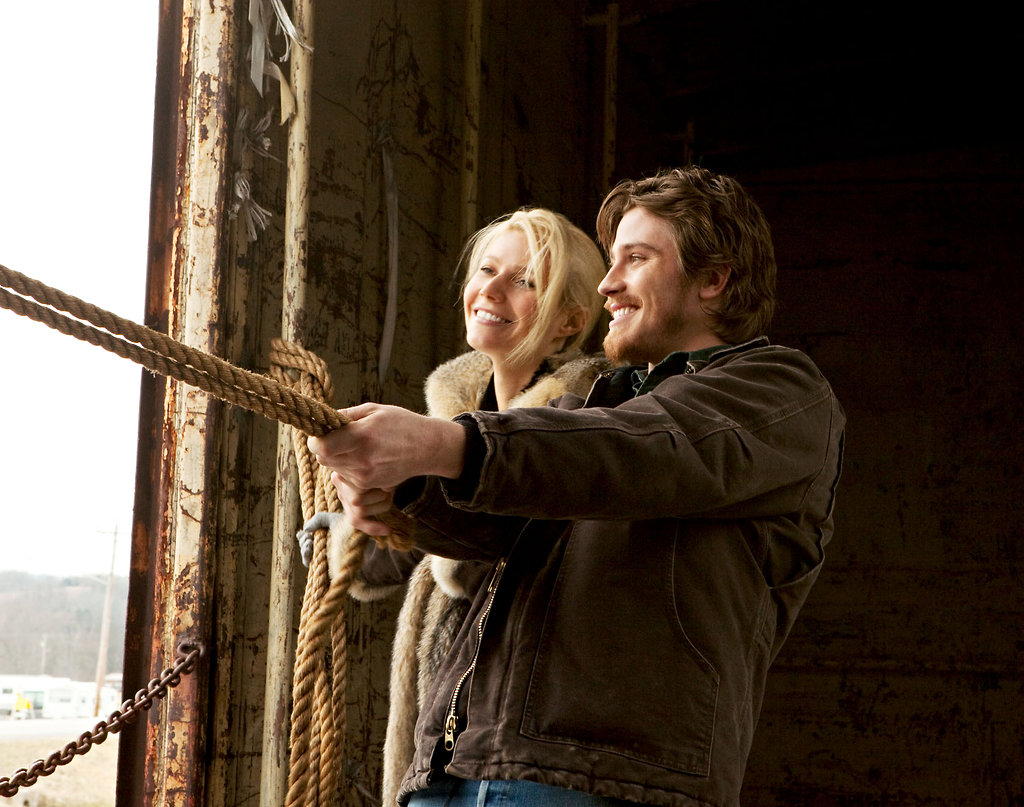 Love? Lust? Appreciation? Affection? We have no real understanding of his motivations, or really for those of other characters as well. We, for example, don't understand why James is so oblivious to his wife's mental/emotional collapse. We learn late in the film exactly what happened in Dallas, but even then, we have to wonder how James could have let his wife, in her conditions (note the plural) go on stage in the first place.

James doesn't appear to be a man motivated by greed, and appears to at times genuinely care for Kelly, so you wonder why he is so insistent that she continue a tour she is so obviously not fit for. Finally, we don't get a true sense that Beau is what the screenplay wants him to be: either a caring individual or a love'em and leave'em type. 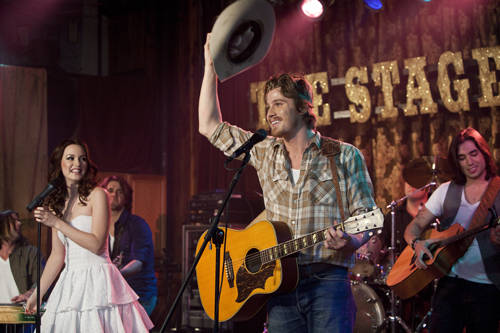 In truth, Country Strong isn't about Kelly Canter. Rather, she is the reason that Beau and Chiles are brought into the story. Most of the film really is about them and their conflicting styles of country music: Beau a country purist in the George Jones style, and Chiles more Country Pop in the Taylor Swift mode, and their relationship: from hostility to romance.

Given all that, Country Strong is still entertaining and pleasant, right up to the ending, which kills the positive mood of the film and comes so out of left field you wonder if it was the filmmaker's attempt at heavy drama.

Paltrow's Kelly does create a portrait, curiously, not of a strong woman as the title would imply, but instead one who is falling apart. I was surprised to see people crying when we see her at the end, and it's a sign of her performance that she was able to move people so emotionally.

McGraw really didn't have much to do except stare out from the sides: either in anger or in love, and considering he is a genuine country music star, his character seems again unaware of anything involving his wife. His dismissal of Kelly's inability to perform should make his unlikable, but he didn't quite muster the anger the character would have had at Kelly's stumbling into oblivion. You don't get his motives for getting his wife out of rehab or pushing her to go back on the road. A more sensible man would have taken her out of circulation and back to dry out. Somehow, that idea never appears to occur to him. This is a curious aspect that makes the plot points within Country Strong, again, very illogical. I will also say that this was the worse hairpiece in his career.

As an actor, Hedlund is a very, very good singer. For most of Country Strong, he wasn't acting; he was singing, giving a series of performances that show he could easily transfer to a recording career should he want one. As in TRON: Legacy, I will put the blame on the fact that Beau was given not much to actually do. To his credit, he did project an unspoken passion for Kelly, even a more caring attitude than James'. However, given he has no problem shifting his romance to Chiles, you wonder what kind of person he really is.

It is Meester who impressed the most. Not having seen Gossip Girl, I come into her performance unprejudiced. She starts out as a bit bitchy and with an unsubstantiated confidence, but when she freezes when taking to the stage, we do actually feel for her. A problem in the screenplay is in how quickly she overcomes her stage fright (one wonders how she managed to keep failing to sing at a small club, which looked like a big Karaoke Night, but could take a major arena concert with almost the greatest of ease), and another script issue is in how Beau and Chiles' duets are handled (him coming to rescue her was a bit cliché) as is how their relationship grows.

Finally, I will question a point of logic within Country Strong. There's a scene where Chiles is reading flash cards with information in order to not appear dumb in interviews, and the question Beau steals from her is 'When did General MacArthur return to the Philippines?' The answer is given as 1946, but this makes no sense since everyone knows or should know the war ended in 1945; he kept his "I Shall Return" promise in 1944. It's these points of logic that get to me. Don't these people have Wikipedia?

In a film like Country Strong, music is important, and as stated the three singing leads handle this aspect far better than one would have thought. Even though the title song is the one getting the most publicity, for my money the Hedlund/Meester duet Give In To Me and Coming Home (sung by both Meester and Paltrow at her big Dallas Comeback concert) are the better songs and make the experience of watching Country Strong enjoyable. You tap your feet to the music, and the big Comeback show is filmed so well you forget you're watching a movie and can be fooled into thinking it's a concert film (down to three wardrobe changes for Kelly, which makes it a long show).

I was also highly impressed with Hedlund's cover of Merle Haggard's Silver Wings, which again could easily find its way on county radio if country radio wanted Haggard covers versus the pop-country of a Lady Antebellum or Florida/Georgia Line.

What brings Country Strong down from where it could have been is in the ending: it is so downbeat and even illogical. It doesn't make clear what exactly happened, and we can only speculate as to the motive. One wonders if it was necessary.

If it were not for this forced unhappy ending, Country Strong could have lived up to its title. The singing performances are quite excellent (the acting from the female leads outdoing those from the men), and it's a good film, though not great. It can be enjoyed by those who are still country, now that country's cool. You might have some issues with Country Strong though, if you were country when country wasn't cool.