TRON is one of those films that came and went when first released in 1982 only to be kept alive by rabid fans who found in its computer-generated effects and cyber-world something beyond amazing. My own history with TRON is like most people: I didn't see it when it came out and didn't care too much to do so. My friend Fidel Gomez, Jr. (who may or may not be dead), however, was/is passionate about TRON (not to the point of dressing up like the characters in his defense), and he foisted it upon me.

Now, I will confess I thought the graphics were quite good, almost revolutionary, for its day, and it was entertaining, if not this monumental piece of film making the fans (whom I lovingly call Tronnies) have built it up to be. In any case, TRON became a cult film, and a particularly strong cult it did spawn, so much so that nearly thirty years later, a sequel was commissioned. TRON: Legacy, to its credit, doesn't appeal strictly to its oddly fanatical base. TRON: Legacy, to its detriment, doesn't increase its appeal with non-Tronnies.

Tron creator Kevin Flynn (Jeff Bridges) tells his son the story of Tron (thus putting those who haven't seen the original up to speed in a clever way from screenwriters Edward Kitsis and Adam Horowitz from a story by Kitsis, Horowitz, Brian Klugman and Lee Sternthal). The elder Flynn is just going away briefly, or so we think.

Now, twenty years later, his son Sam (Garrett Hedlund), is a brilliant but bitter young man. As much as Flynn's partner/surrogate father Alan Bradley (Bruce Boxleitner) tries to steer Sam, nothing will erase his anger at being wealthy but abandoned. After sabotaging a launch of a program at his father's company, Alan tells him he received a message on his pager (yes, apparently someone still has one) from Kevin, emanating from the Flynn Arcade. Sam goes there, and among the video arcade machines he discovers a hidden room, and in it an operating computer. Once he starts it he is transported to the world of Tron. 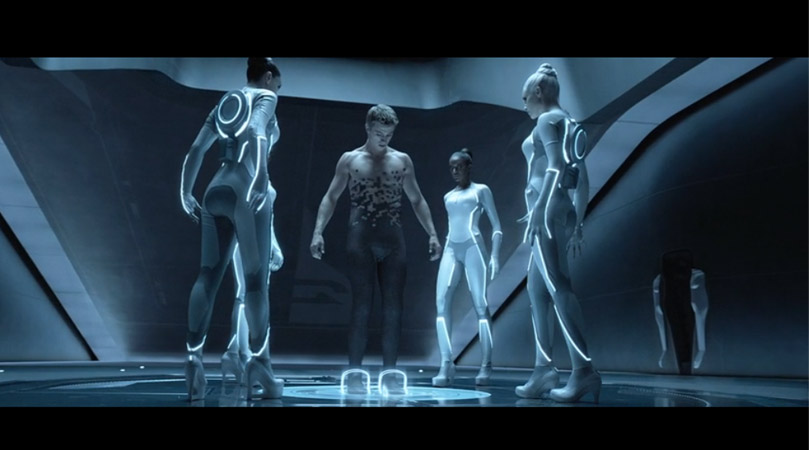 Sam is almost immediately thrust into The Games, where he fights his way into attracting the attention of a younger-looking Kevin. However, this is a False Kevin (perhaps a nod to the False Maria in Metropolis), for in reality this is his creation, the program known as Clu (Bridges digitally altered). Clu has taken over this world, and the real Kevin has been trapped within it.

Kevin's doppelganger wants to take both Flynns prisoner, but after a race Sam escapes with the help from Quorra (Olivia Wilde), who we discover is Kevin's protege. She takes him to his father, who tells him how Clu, attempting to bring total perfection to the Tron world, purged all ISOS (beings within it that were judged not perfect) and overthrew both Flynn and Tron himself in what I call a "Clu D'Etat".

It was Clu that lured Sam to enter The Grid through The Portal, which Clu hopes to use to escape and bring his perfection to Reality. While Sam is all for fighting, Kevin takes a much more Zen-like look to all the goings-on, preferring to remain in exile where Clu cannot get at him or his disc (that circular wheel on his back that contains all his information). However, The Portal will close soon, and if they don't escape they will all be trapped there forever. They opt to take their chances, even while Clue and club owner Castor (Michael Sheen) work to get at them. 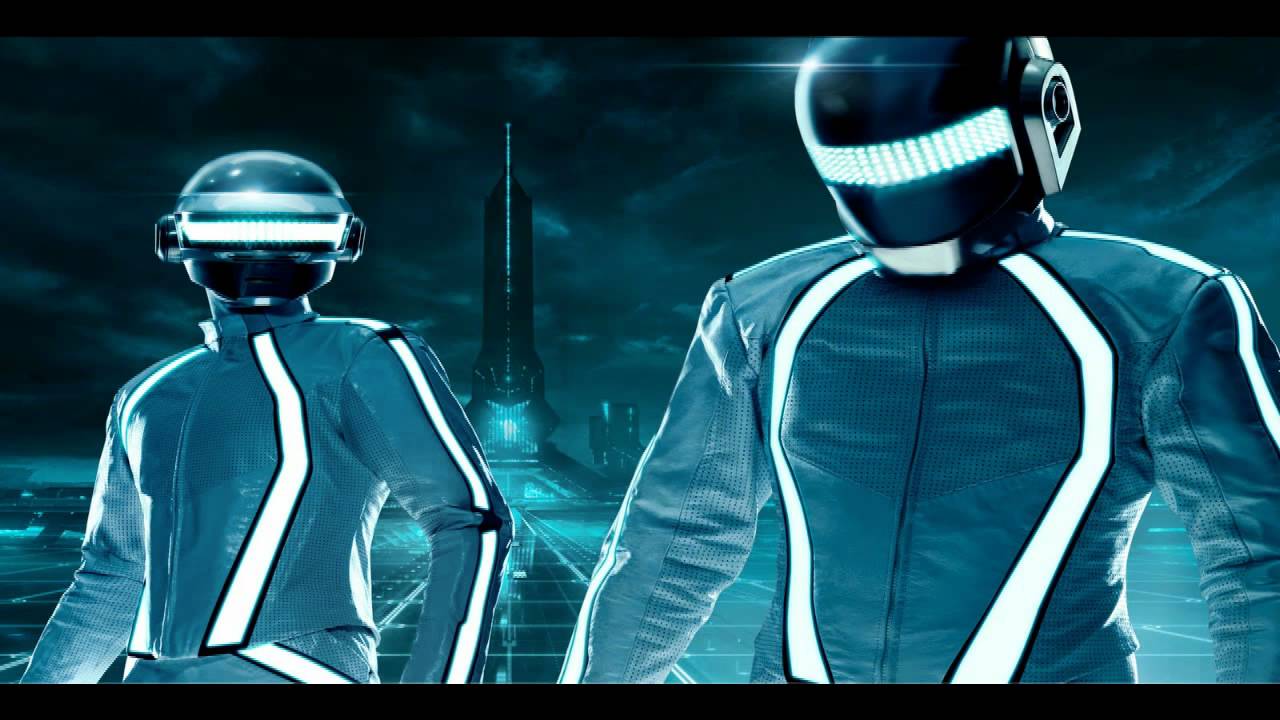 TRON: Legacy is the first time this year that I have indulged in 3-D. All this time I have been resistant to going to see any feature in this medium and still think on the whole it's a pretty daft (or Daft Punk) idea. However, I opted for seeing this film in 3-D because if any film this year lends itself to grand visuals, it would be TRON: Legacy, since this is an entirely fantastical world.

However, given the fact that the screenwriters and director Joseph Kosinski have at their disposal an opportunity to create a world that can overwhelm you, they make very little use of 3-D. In fact, only once was the actual effect effective, and it's a worrisome sign when we're told in the beginning of the film that most of TRON: Legacy is in 2-D with some scenes in 3-D. We're also told to keep our glasses on at all times, but wouldn't you know it, I didn't. You could clearly see that TRON: Legacy would be just as easy to enjoy in 2-D, and given the subject matter it seems a terrible disappointment. In short, it isn't worth your money to go see it in 3-D or even Extreme 3-D (which I did), so that's a major minus to the film.

Of greater concern is that while there are two official screenwriters and four story creators, TRON: Legacy suffers from a terrible lack of actual substance. There is the cliché of the abandoned boy who grows to a brooding but brilliant young man, and of the encounter with revolutionaries at a techno club (or are they?), and as a side note, since when do computer programs come with techno clubs? Just a thought.

The movie lasts a whopping two hours, yet it fills most of its time with either less-than-thrilling action scenes or the eternal struggles between fathers and sons with some odd flirtations between Programs and Users.

TRON: Legacy could have been a good ride, but the whole project took itself way too seriously, as if trying to segway into Matrix territory when it all really started from an arcade world. You can tell what the ambitions of TRON: Legacy were by the incessant use of the article "the".

THE Grid, THE Portal, THE Purge, THE Betty White (OK, I made up the last one, but wouldn't it have been cool to have had her as some sort of Tron High Priestess?)

In trying to create this fantastical world, we never really got to marvel at the magnificence of the world of TRON, because we had to overthrow Clu and stop him from escaping this world.

I mentioned The Matrix, but at times TRON: Legacy looked as if it were trying to rip off other films as well. When Sam arrives in Tron-World, the movie almost seems to shift to Gladiator (and it isn't very believable to imagine Sam could get the hang of it so quickly). The biggest influence appears to be the Star Wars films, with Kevin Flynn appearing as a cross of Phantom Menace's Qui-Gon Jinn and A New Hope's Obi-Wan Kenobi, and his nemesis being nicknamed by yours truly as Darth Clu.

That of course, would make Sam the Luke Skywalker in the film. When at the end, you don't actually hear the dialogue but substitute "If you destroy me I will become more powerful than you could ever imagine" you realize the story has lost its appeal. There is also when we see Clu address his Army of Programs; it looked like Leni Reifenstahl had made a postmortem comeback to re-direct Triumph of The Will (or would it be Triumph of THE Grid).

When coming to see Castor, it was all far too reminiscent of Blade Runner at least in appearance, though not in substance. The strangest ode appears to be at the techno club, where Sheen appears to be channeling Malcolm McDowell in A Clockwork Orange in what can kindly be described as one of the most embarrassing and over-the-top performances he's ever given. One didn't know whether to feel genuine sorrow or genuine anger at watching Sheen ham it up to the Nth Degree; in fact, it bordered on farce.  I'm not sure even Sheen knew what he was doing or what he was doing it for. 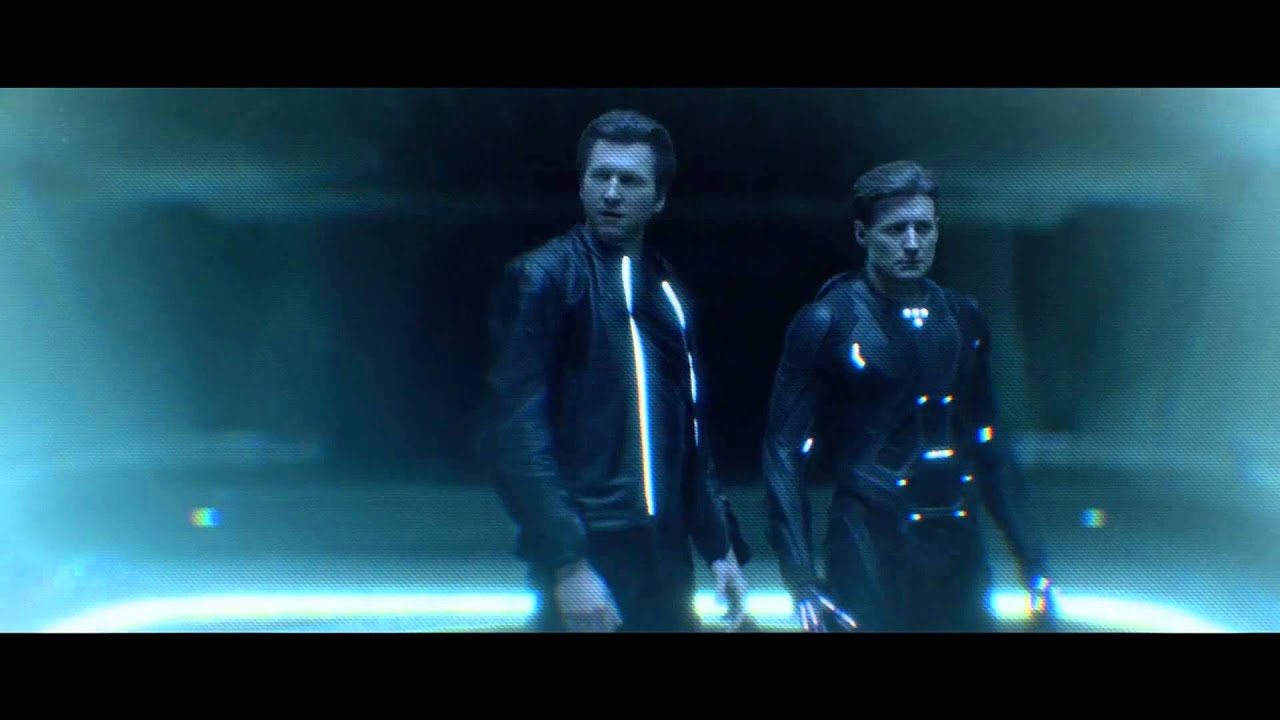 If Sheen gave the worst performance in his five-to-seven minutes of screen time, the rest of the cast didn't fall much behind. Hedlund's voice sounded like was Christian Bale's voice double in a Batman film, and even though he's caught in an amazing world unlike anything in existence his facial expression didn't alter much if at all. Wilde is extremely attractive as Quorra, and granted she is better than her co-stars, but since we don't have time for character development we don't really learn much about her.

Bridges at times does appear to be more like The Dude from The Big Lebowski when he's the Older Flynn (at one point, he does chastise his son by telling him he's 'messing with his Zen thing, man'), but in those scenes when he's younger, he does have a good menace as Clu.

I will compliment TRON: Legacy for nearly always seemingly blending a younger Kevin Flynn into the film without it looking fake or unnatural. You believed it really was another actor, most of the time. The sets, while appearing to borrow again from The Matrix, to their compliment didn't overwhelm the imagery, but it didn't quite capture the fantastic world Tron occupies as well as they could have. There was a certain monochrome nature to it all: the film is dominated by black and white sets and costumes.

Claudio Miranda's cinematography doesn't help: while it was good it sometimes grated on the eyes to see so much light and so much dark right after. I also compliment Daft Punk's original score (though their appearance at Castor's club was quite bizarre: who DJ's a fight scene?).

In the end, TRON: Legacy's ambitions overwhelm the end results. I don't know if it will please the Tronnies, and if one doesn't think too hard it can be enjoyable. However, the story does appear to cut off any chance for a sequel, and it seems a shame that for a film that inspires such rabid passion (and which left positive memories for me although I'd have to see it again), it didn't live up to its potential. It takes itself so seriously, tries to be mythic and epic but only leaves one sometimes scratching their head wondering what is going on, which makes Michael Sheen's antics all the more bizarre and hilarious.

TRON: Legacy may be in need of some rebooting, or at least re-programming.