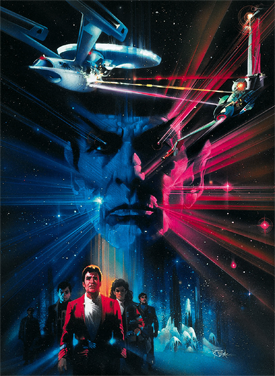 
This is a case of 'picking up right where we left off'. Star Trek III: The Search for Spock not only begins right where Star Trek II: The Wrath of Khan ended, but it also has the added benefit of telling you in the title what the movie is all about. Thus, you already know even before the opening credits what the goal of the film is but if you didn't see Wrath of Khan, you don't have to worry about where you are in the story.

Wrath of Khan was certainly a hard act to follow, and Search for Spock is a good follow-up, but in a curious way, while it is the third Star Trek film, it falls somewhere between the first and second in terms of story and tone.

We begin with footage from Wrath of Khan, at the death of Spock (Leonard Nimoy) and his funeral aboard the U.S.S. Enterprise. The crew, still in shock and heartbreak at their comrade's death, head home. However, Dr. Leonard 'Bones' McCoy (DeForest Kelley) is acting strangely: although there was always an undercurrent of hostility between him and Spock, he is found in Spock's quarters, rambling about having to go home, to Vulcan. As Captain Kirk (William Shatner) tries to make sense of all he's gone through: the death of one friend, the mental instability of another, reconnecting with his illegitimate son Dr. David Marcus (Merritt Butrick), and the end of the Enterprise itself, he receives a visit from Spock's father, Ambassador Sarek (Mark Lenard).

Together, they discover that Spock's katra (the living spirit within each Vulcan, even, it seems, half-human Vulcans like Spock) is not with Kirk, but with the last person he came in contact with: McCoy. The only way to bring Spock back is to go back to Genesis (the planet brought to life by Marcus' Genesis Project) and take his remains and McCoy to Vulcan. Unfortunately, the Genesis planet has been quarantined, but when did that ever stop Kirk and Company? They steal the Enterprise and head straight to Genesis.

On Genesis itself, David and the Vulcan Lt. Saavik (Robin Curtis, taking over Kirstie Alley) go to investigate unexpected readings of life forms on the newly created planet. Their ship, the Grissom, is destroyed while they are on Genesis, where they've come across both Spock's now-empty coffin a young Vulcan child. Connected?

The Grissom is destroyed by Commander Kruge (Christopher Lloyd), a member of the Federations most intractable foes: the Klingons. They have discovered the Genesis Project, and decide that it would be a perfect weapon for galactic domination. Without knowing anything about what the Enterprise is up to, they beat them to Genesis, taking David, Saavik, and the Vulcan boy hostage.

The Klingons are deaf to David's warnings that Genesis is unstable and will soon destroy itself. The Enterprise arrives and there commences a standoff between Kirk and Kruge (side note: Kirk has fought two villains whose name starts with the same initial as his last name in successive movies: Khan and Kruge. I just find that fascinating, to coin a phrase. Yet I digress).

While eventually Kirk is able to defeat the Klingons, it comes at a very high price for him personally. Still, they manage to recover the Vulcan boy and go to his home world, where the High Priestess T'Lar (Dame Judith Anderson) will attempt to perform Fal-Tor-Pan, a Re-Fusion of Mind and Body (side note: I feel like such a Trekkie noting all this Vulcan vocabulary even though I've seen only three episodes of the Original Series as of this writing). Is it successful? Well, the film ends with "And The Adventure Continues..."

Since the actual character of Spock is seen only in the last fifteen of so minutes of Search For Spock, it did give Nimoy the opportunity to direct the film without having to worry too much about acting in it. He makes mostly good use of his film directorial debut when it comes to most of the cast.

One strong performance was that of Lenard's Savik. He carried an air of dignity befitting a Vulcan (and given he had played the part on the Original Series, he slipped back into it with the greatest of ease). Of the newer members, Lloyd's Kruge gave the best performance. Lloyd was intense, harsh, and brutal: all qualities needed for a successful Klingon. He played it perfectly straight as a being who will do anything to get what he is after, and if it means killing unarmed non-combatants so be it. Kruge doesn't play games, which makes him a fierce adversary.

Lloyd's sharp performance comes in sharp contrast to far weaker ones. Curtis' Saavik to my mind seemed only human as a Vulcan. She couldn't seem to master the lack of emotion Vulcans have, especially since while never stated openly, there are hints that Saavik and David were on very intimate terms. Butrick's David was also a non-entity in Search for Spock, as if he were almost bored and ready to move on in his career.

Nothing will ever shake Shatner's particular line-readings. When he says to Savek, "What you ask...is difficult", it shows Shatner is up to his very old tricks of pausing between lines for no reason other than more camera time. The worst performance was Scott McGinnis, who was on screen for less than five minutes as 'Mr. Adventure', a young crewman who Uhura (Nichelle Nichols) has to disarm to allow the crew to steal the Enterprise. He left the biggest impression because it was so emotionless, so dull, so weak, especially when compared to Lloyd's.

Side note: future Night Court and The Librarians star John Larroquette was completely unrecognizable as Klingon Maltz. Wonder if he goes to any conventions?

Unfortunately, Kruge would have been better served if he had been the primary antagonist in another Star Trek film. In Search for Spock, a lot that is shown in the hour and forty-five minutes, although it felt longer, appears almost incidental to the central story. I couldn't shake the feeling that the Klingons, the Daleks of the Star Trek mythos, were thrown in by Harve Bennett's screenplay because A.) the Trekkies demanded it, and B.) the Enterprise needed complications on Genesis to fulfill the main point of Search for Spock (namely, bringing Spock/his body to Vulcan).

It's as if Bennett and Nimoy decided it would be too easy for the Enterprise crew to dash away from Federation HQ and go to Genesis; they needed an antagonist, possibly from the television series, to add another level of difficulty to the actual search. Somehow, a planet about to implode isn't a big enough crisis. In short, the Klingon wasn't important because they weren't actually fighting against them, merely trying to remove them from the more central situation.

Search for Spock, under Nimoy, appears to veer close to that reverential, hushed tone that so doomed The Motion Picture, as if the audience should all be in awe and aware of just how serious, how important both the situation and the film itself are. You can tell because there is little to no sense of urgency from nearly everyone (with the possible exception of the Klingons themselves, who are desperate to get their hands on the Genesis Project they've stumbled across).

There was no sense of real tension when the Enterprise makes a run from the Federation, perhaps coming from the fact that I had already guessed that "Scottie" (James Doohan) had already sabotaged the pursuing Excelsior. Side note: I shall ALWAYS HATE Doohan's broad, broad, broad Scottish brogue.

When those aboard both the Grissom and the Enterprise are facing destruction, there doesn't seem to be any real hint of danger or even anxiety by those on the ship. Instead, it almost appears that they are all saying to themselves, 'well, the ship is about to be blown up, try to act like you're a bit concerned'. The battle between the Klingon Bird of Prey (with its cloaking ability, which was well-rendered, granted) and the Enterprise was good, but not great, nothing to make it rise to the epic battle from Wrath of Khan. 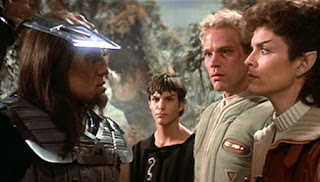 Nimoy, to his detriment, didn't capitalize on certain moments that could have become iconic. The fan base is treated to several moments that would have been especially traumatic or heartbreaking, but there was no sense of shock or awe. We see the end of an important piece of Star Trek iconography, but when shown on screen it almost looks boring. When an important character is killed, not only is it mostly off-screen to where it is almost invisible, but the reaction by those immediately connected looks almost comic. We never get the sense that those involved are impacted greatly by this person's death.

Whatever pathos there could be in Search for Spock is swallowed up by having to go back to concentrating on the central objective of the crew when we as the audience were steered into taking this sidetrack by the film in the first place.

Also, the actual Re-Fusion ceremony could have provided some great moments of drama and visual splendor; while Dame Judith Anderson did the best she could as the High Priestess one couldn't help suppress the giggles at the actual Fal-Tor-Pan ceremony on Vulcan, a planet that has this vaguely Egyptian-style motif in its decor with hints of Shintoism.

Finally, while Nimoy could have done more with McCoy's struggle of having Spock live within him (and at a bar scene Kelley shows hints of how Spock's thinking interferes with his own), for most of Search for Spock Kelley is playing Bones, not Spock trapped within Bones' mind. What could have been a showcase for Kelley playing two parts was almost forgotten except for two scenes, as if Bones would be unrecognizable if he tried to do Spock as well as Bones.

Finally, I will state yet again how much I hate it when a film violates one of my Golden Rules of Filmmaking: Never End Your Movie By Suggesting There Will Be A Sequel. In Search for Spock, they all but tell us to wait for Part IV.