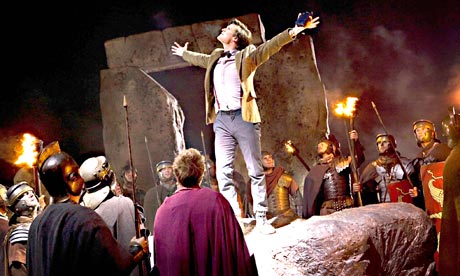 It's all come down to this. For the past eleven stories, we've been treated to a series that involves a gigantic crack in time. How then, do you wrap up the fifth series/season of the revived Doctor Who? Well, by basically throwing everything you can at it: Daleks, Autons, time jumping left/right/center, River Song, and even a wedding (can't end a season without a wedding).

The Big Bang concludes what should be an exciting season for Matt Smith's debut Doctor Who season/seriest, yet I've had a reluctance to write about it. That is a result of when I first saw the two-part The Big Bang (The Pandorica Opens/The Big Bang), I frankly didn't understand what was going on. I opted to wait until the Fifth Season/Series was released on DVD to re-view the story, and it did clear up some things. A second viewing did improve my feelings for the story, but there were still things that got on my nerves to no end.

We get a bit of a greatest hits from previous stories with cameos from Vincent Van Gogh (Tony Curran), Sir Winston Churchill (Ian McNeice), River Song (Alex Kingston), and Liz 10 (Sophie Okonedo), who should be correctly referred to as Her Majesty Queen Elizabeth X. All of them, connected to The Doctor (Matt Smith), find that they've all been given a message to send to him: a Van Gogh painting discovered by Churchill's men, who calls River and gets her to break into Liz 10's palace to get said painting and show it to the Doctor. The Doctor and Amy Pond (Karen Gilliam), thanks to River's ubiquitous message, "Hello, Sweetie", trace her to Stonehenge when the Romans were in Britannia.

Disguised as Cleopatra (or as I lovingly call her, Cleo the Nympho of the River Song Nile), Song shows them the painting: it is the TARDIS exploding. They discover that beneath Stonehenge there is a chamber, and inside is the fabled Pandorica, a large box containing the most feared thing in all the cosmos. However, a message is emanating from Stonehenge, and a cavalcade of aliens are hovering above them and the Roman garrison, all eager for said box.

Among the Roman soldiers is Rory (Arthur Darvill), who remembers all except how he got to be Roman. He is desperate for Amy to remember him, but she cannot, even after Rory saves her from a Cyberman at Stonehenge (there's a sentence one never thought to write).

We eventually find shocking fact after shocking fact: everything the Doctor and River see is from the memories of Amy (the soldiers, the Pandora's box), that the soldiers (including Rory) are in truth Autons, and that all manner of aliens (Daleks, Cybermen, Autons, Judoon, Sontaran, even Silurians) have formed a Grand Alliance to stop the most dangerous being and imprison it within the Pandorica.

That most dangerous being is The Doctor. 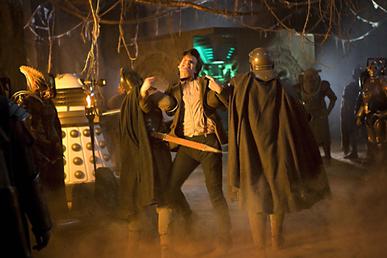 At the end of Part I, Auton Rory has unwillingly killed Amy, River is trapped within the exploding TARDIS, and the Doctor is locked away within the Pandorica.

When we get to Part II, a young Amy (Caitlin Blackwood) is praying to Santa (side note: far be it for anyone to pray to anything resembling God, although in fairness it is suppose to be an alternate world). In this world, there are no stars, yet Amy draws pictures of the sky with them. She then gets a mysterious message telling her to go to the museum, and there she hides past closing time, where The Pandorica, which is an exhibit, opens, to reveal not the Doctor, but Amy fully alive.

We then get treated to the Doctor jumping from Stonehenge, where a devastated Auton Rory (having survived the destruction of all those within the underground chamber by not going when the universe basically collapsed) pledges to protect the Pandorica containing Amy (and which will keep her alive), and the Museum, where he, Auton Rory (having stayed faithfully at Amy's side and now a regular security guard), River (brought out from the exploding TARDIS), and young Amy (up to where the plot required her) attempt to bring about Big Bang 2 (which I loving call the Bigger Bang or Big Bang: The Sequel).

This will require the Pandorica (which contains elements of all life) to collide with the exploding TARDIS. It may also mean the end of the Doctor, but he must work fast, since all existence is quickly collapsing upon itself. Once he does, all those damn cracks in time are finally healed, but it will require the Doctor to be on the other side of it.

Amy is restored to her life, but with the benefit that she is no longer an orphan, but with a mom and dad, and a fully alive and human Rory. The Doctor got her to the church on time, metaphorically. Once she and Rory finally marry, we see a figure very similar to River Song pass by, and Amy is given a mysterious book. She senses that someone should be there, and she remembers from the old adage "Something old, something new, something borrowed...and something blue". Once she (and Rory) recall, the Doctor appears, in full tux and top hat, to join in the festivities, and after the good times are had, Doctor and River say their farewells, Mr. and Mrs. Williams join the Doctor in the TARDIS, to begin new adventures.

Steven Moffat has created some wonderful, even beautiful moments, in The Big Bang. The Doctor's speech challenging the various aliens to descend on Stonehenge is one of the best individual moments in Series/Season Five of Doctor Who. Director Toby Haynes maintains a great tension throughout both parts, and for the most part balances the jumping between the Roman times and the alternate future quite well.

Haynes also brought some wonderful performances out of the main cast. I would say the best is Darvill's Rory, who has gone from the being a bit goofy and dumb to a being tormented by having human memories and emotions yet is a being made out of plastic. Never once when he's a Roman/Auton does he play anything for laughs. That mostly comes from Smith, who is in full manic, almost deranged mode when expressing joy or frustration, given he has to be bouncing all over time. Kingston is adventurous and playful and dangerous and serious as River Song.

Where I had problems with The Big Bang, it dealt with when we got to Part II. If one thinks about it, once we had the thrilling endings of Part I (Amy and River dead and the Doctor imprisoned within the Pandorica) we discover that in reality, the Doctor spent actually very little time inside the box. It made the thrilling and terrifying ending of Part I rather moot to my mind.

It also brought back memories of the little I saw of another two-part story (Journey's End Parts 1 & 2: The Stolen Earth/Journey's End). In that one, the Doctor (David Tennant) looked as if he were about to regenerate, but all he had to do was focus the regeneration energy into his severed hand which he kept in a glass jar and all is well. I stopped watching right after that. For some reason, it seemed all too convenient, too easy. We had an extremely tense, dangerous situation, and then a quick answer resolved all the tension, sucking all the energy out of the situation.

I felt the same thing here: a simple Vortex Manipulator brought along with forethought by River got the Doctor out of the box. If there's one thing I hate, is being teased only to find the end result is less than the sum of its parts.

I also, frankly, hated the wedding, or rather, the dance. I hated Smith's deliberately goofy dancing more than anything else in The Big Bang. It was also as if, after we had gone through all this danger, we were going to plunge into absolute silliness to the point of idiocy. I understand the need to decompress, but this was a bit too much to tolerate.

On a more serious point, I know Moffat thrilled to seeing an Axis of Evil joining together to destroy their nemesis, but wouldn't it have been easier to kill the Doctor than imprison him. Here, mainly the Daleks and Cybermen, who have consistently failed to destroy The Oncoming Storm and have also fought against each other (Doomsday Parts 1 & 2: Army of Ghosts/Doomsday), have finally captured the Doctor. Rather than kill him, their solution is to lock him up. No wonder they keep failing: they can't get rid of their competition once and for all when they have the chance. It might have pleased fans to see cameos from other villains, but I just didn't think it made sense.

I also wondered why the Silurians popped up when in reality, the Doctor has always tried to help them, or at least in two of the three stories they appeared in (Doctor Who and the Silurians and Cold Blood Parts 1 & 2: The Hungry Earth/Cold Blood. In the third story, Warriors of the Deep, they were the antagonists in league with the Sea Devils, so maybe they only want to kill him when they are allied with other beings. Just a thought).

Overall, The Big Bang kept a strong pace, with great performances out of Darvill and Kingston (Smith at times appeared downright daft, and Gilliam did an awful lot of crying). Sorry, but Smith's dancing gets points knocked down (I just couldn't take it seriously after that, although the top hat started the descent into idiocy). 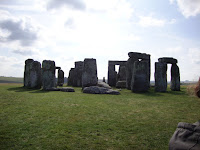 The Real Stonehenge. Curiously, I found no boxes there (though not for lack of trying).


Next Story: A Christmas Carol
Posted by Rick at 7:15 AM