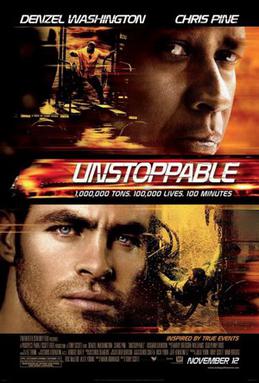 
I've always wanted to travel by train, just once. So far the closest I've ever come to it has been either at a Disney park or on the public transportation systems of New York City (the subway), London (the Tube), or Paris (the Metro). Yet the lure and mystique of rail travel has always had an allure to my mind. Whenever I hear a train whistle, I think of travel, of foreign and exotic locales filled with adventure, even romance.

Unstoppable doesn't deal with that kind of rail travel. Instead, it deals with another staple of action films: the runaway train. Director Tony Scott and writer Mark Bomback have created a remarkably tense action film (a plus) with characters going through at times clichéd situations (a minus).

We begin with Will (Chris Pine), the new guy at the railroad company on his first day (cliché). He is put with Frank (Denzel Washington) the wizened old veteran facing the end of his career (cliché). On this particular day, the Hot-Shot Rookie and the Gruff Vet go about their day, while in another part of Pennsylvania a series of mishaps by Dewey (Ethan Suplee) cause a train to leave unmanned and with the brakes off. Said train, containing toxic chemicals (cliché) is quickly gaining speed, and with no one at the controls it soon threatens to go off the rails and release its contents.

In its path is among other things another train full of children learning about train safety (cliché), a couple of horses on the track (cliché from Westerns), and the Hot-Shot Rookie and the Gruff Vet. If all that wasn't enough, both the Gruff Vet and the Hot-Shot Rookie have domestic issues that intrude on their lives during this day (cliché), while the heads of the company, who were playing golf when all this started (cliché), care more about the cost to the company than about the lives that could (and are) lost because of this train (cliché). Trying to gain control of the situation is Connie (Rosario Dawson), the strong, smart, but easily dismissed female supervisor. After an attempt to land a former Navy SEAL now engineer fails, the Gruff Vet decides it's up to them to stop the runaway train, with the Hot-Shot Rookie less eager but knowing it has to be done (cliché). 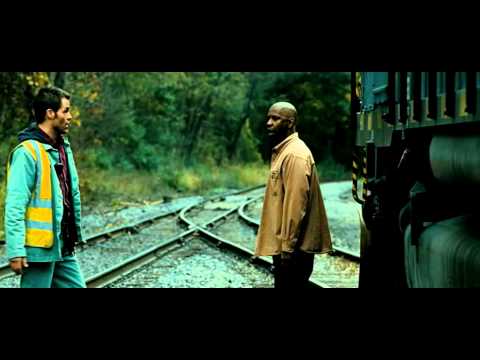 In spite of how Unstoppable seems to hit every possible predictable plot device from a series of films, it isn't to say the film is boring. Far from it: Unstoppable delivers on its promise of intense action and close calls, building great tension starting from when the train starts to run away right down to the inevitable moment when a ninety-plus miles per hour train is making a turn on an elevated track meant for fifteen miles per hour turn. Scott knows how to put action sequences together: he presents us with situations that either put people in peril or attempt to stop the train and lets us see how they will turn out.

However, where Scott goes off the rails, is the way he handles the camera. What I could never get around was how the camera would go spinning left right center for no reason. Scott does this wild camera work almost from the first few frames of Unstoppable. I wrote in my notes, "Taking a guess Scott directed videos" because all the constant shifting and moving looked like something from early MTV. I have found out he did direct a couple, but what made this particular obsession with zooming and panning this way that way and back once over is that it was not only unnecessary, but a little nauseating. It takes away from the tension he already has, and worse, he continues this camera spinning when the story reaches a denouement. It made no sense, and it got on my nerves.

Another problem facing Unstoppable is one of the clichés: the domestic front. You can have family issues coming into play in an action film, but here, going into Frank's strained relationship with his daughters or Will's strained relationship with his estranged wife and young son figuratively slow the picture down. We really never learn anything about Connie's domestic life, and didn't take from her job performance, so why do we have to go to whether or not Will and his wife get back together or not?

To their credit, both Pine and Washington handled their roles well in spite of being underwritten characters. Washington has mastered the Gruff Vet role, showing a slight contempt for the man who is basically replacing him. We should know by now, after years of movie going, the Voice of Experience (in this case, Washington's Frank) always, always knows best. Pine did the best he could balancing Will's worries about a family court case with attempting to do a good job on his first day. Both handled their action scenes well, and that's when both Unstoppable and their characters come to life. When we have to go their children, we lose some of the interest.

Unstoppable isn't a bad film; on the contrary, it can be quite exciting and entertaining. However, if Scott hadn't decided to let the camera go all over the place and if Mark Bomback's script had kept things tighter without going to a whole gaggle of standard situations domestic and foreign, the film would have been far greater.

As it stands, Unstoppable failed to get to the station by inches.