*Author's note: The screening of Metropolis I attended had the score written and performed live by the Alloy Orchestra. At the time, we were informed that their original score would be included in the re-release of Metropolis on DVD. Unfortunately, as I understand it the owners of the rights to Metropolis opted to go with the original score written in 1927 by Gottfried Huppertz. One can go about hearing it in a roundabout way merely by synchronizing their music to the video. Normally, I'm a stickler for seeing a film as shown, and I would recommend listening to Huppertz's score, but after hearing the Alloy Orchestra's version, which I think is brilliant, I would opt for their score.

How can it be that a film could survive for close to a hundred years undiscovered within the bowels of a South American archive? Frankly, that is an academic question, though granted, an important one, because now, Metropolis, one of the Greatest Films of All Time, is now here, at last, as close to how Fritz Lang envisioned it, and even now, few films are available to capture the lavishness, the epic nature, the dazzling visuals of Metropolis.

In this two-and-a-half hour version (I would like to point out that Metropolis is about the same length as most Harry Potter films), we have a richer, deeper, more grand story than we've seen in any other version. The film speaks on the coming mechanization of the Twentieth Century, of how man will be subjugated to machines, and how some will be pushed down while a few will enjoy the fruits of their labor.

However, it isn't a boring lecture on workers' rights, but a thrilling visual feast with the central theme stated openly: The Mediator Between the Head and Hand MUST Be The Heart. Freder (Gustav Frohlich), is the son of Joh Fredersen (Alfred Abel), Head of Metropolis. As a child of privilege, he like his fellow citizens above ground, knows nothing of how Metropolis is kept running. The hidden hand is of the mass of workers slaving beneath the city, keeping the powerful machines running while they are virtual slaves.

One day, a beautiful woman named Maria (Brigitte Helm) appears in Freder's world, taking a group of worker children with her. Freder becomes entranced with Maria, and he goes into the underworld to follow her. Here, he sees the horrors the workers endure, as well as the message of peace and hope Maria gives them. Freder tells his father of what he's learned, but Fredersen is dismissive of his son's concerns.

Freder, we learn, indeed knows of the dark heart of this paradise. He goes to the Mad Genius of Metropolis, who happens to be his father-in-law, or at the very least the mother of Fredersen's son, Rotwang (Rudolf Klien-Rogge). To create dissension between the workers, he shows Fredersen his latest creation, a robot that through his genius takes on the shape of Maria.

Meanwhile, as Freder learns of what is going on beneath Metropolis, he takes the place of Worker 11811 (Erwin Biswanger), who now goes above ground and witnesses the decadence of Metropolis itself, especially the pleasure district of Yoshiwara. The False Maria urges revolution and a violent overthrow of those above and drives the men who live in Metropolis itself to heights of lust with her Danse Erotique, while the True Maria is taken prisoner by Rotwang.

The Mad Inventor has a secret agenda: blaming Fredersen for his daughter's death, he plans to destroy all Metropolis: above and below. When the workers decide to overthrow their overlords, they abandon the machines, and thus they soon start to fall apart. Those who live above ground become so insane with merriment they do not care about anything. In the chaos of revolution, the children of the workers are forgotten, but soon the water pumps start erupting, threatening all the children with drowning.

The True Maria and Freder find each other in time to rescue them, and the workers seize the False Maria and burn her at the stake. Rotwang recaptures the True Maria and takes her to the cathedral. Freder rescues her, and at the end of the revolution, worker and management realize, through Maria's intervention, that the Mediator Between Brain and Hand MUST Be the Heart.

Metropolis builds up the visuals to heights remarkable today, let alone in 1927 when it premiered in Germany. Take for example when Maria is captured. The imagery is both brilliant and terrifying when she is taken.

Another example is when the False Maria emerges from the robot. It also comes when we have an analogy to the Creation of The Tower of Babel, when we are shown how man continues to repeat the same folly. The title cards tell us as much:

One man's hymns of praise became another man's curses.


Lang not only captures us visually, but also, along with screenwriter and then-wife Thea von Harbau, a story that is still relevant today: how some labor unseen while others obliviously benefit from their work, and how machinery can overwhelm the humanity each person has at birth. Take when we first see the workers: they shuffle slowly, heads down, in lock formation, one group to their machines, one group to their homes beneath Metropolis. The imagery immediately captures us and at the same time is one every worker can relate to. This is counterpoint to how we see the Club of The Sons, a garden of earthly and carnal delights. 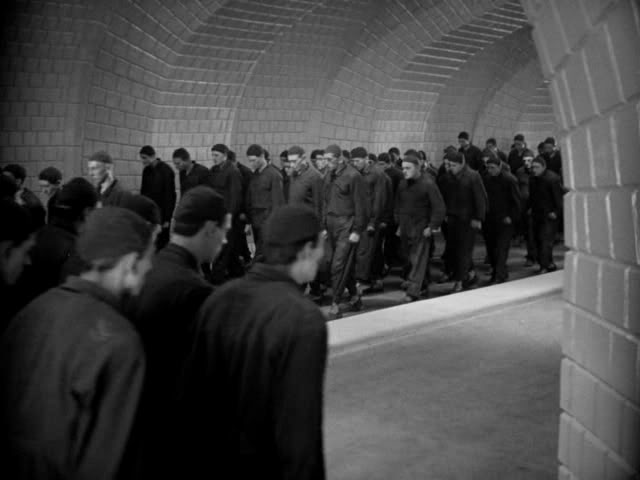 The action in Metropolis builds and builds as the situation in the film becomes more and more out of control, culminating in the not just a thrilling conclusion (will the children survive the flood? will the revolution destroy all Metropolis? will the True Maria survive?) but manages to give us both a peaceful and satisfying conclusion.

I will grant that at times the acting in Metropolis may appear to Twenty-First Century eyes a bit wild and exaggerated. In many silent films that should be forgiven, but I want to stick up for Helm's performance. She had to play two characters: the gentle and loving True Maria and the wicked, decadent False Maria. With the False Maria, she has to do two things: create fiery revolution with the workers, passionate lust with the Club of Sons. That she manages to do all that without speaking is a sheer acting tour de force.

Let me now speak of the restored version. With nearly half-hour's worth of new footage, we get a deeper, richer story. For example, we never saw what Worker 11811 saw once Freder took his place. Now we can, and his adventures in Yoshiwara give us a greater insight into the world Metropolis is.

The same can be said for Josaphat (Theodor Loos), Fredersen's assistant who is nearly driven to suicide because he does not keep Freder in check. Admittedly, it becomes quickly clear which scenes are the newly-discovered ones: they are the ones that looked scratchy compared to the rest of Metropolis. However, while perhaps at first that might prove distracting, soon one quickly accepts it to where by the end of the film, one has thoroughly forgotten about it and it becomes a non-issue.

The effects of Metropolis are still being felt, from other innovative films like Blade Runner right down to how we must be vigilant that in order to achieve certain goals, the human element is taken into account. It is a visually amazing film with relevant themes: in short, a thorough masterpiece. Metropolis, now restored, rises to greater heights. Hands, Head, Hearts--although we are missing Health (and a few more minutes of the film), each part and viewer will be completely satisfied.