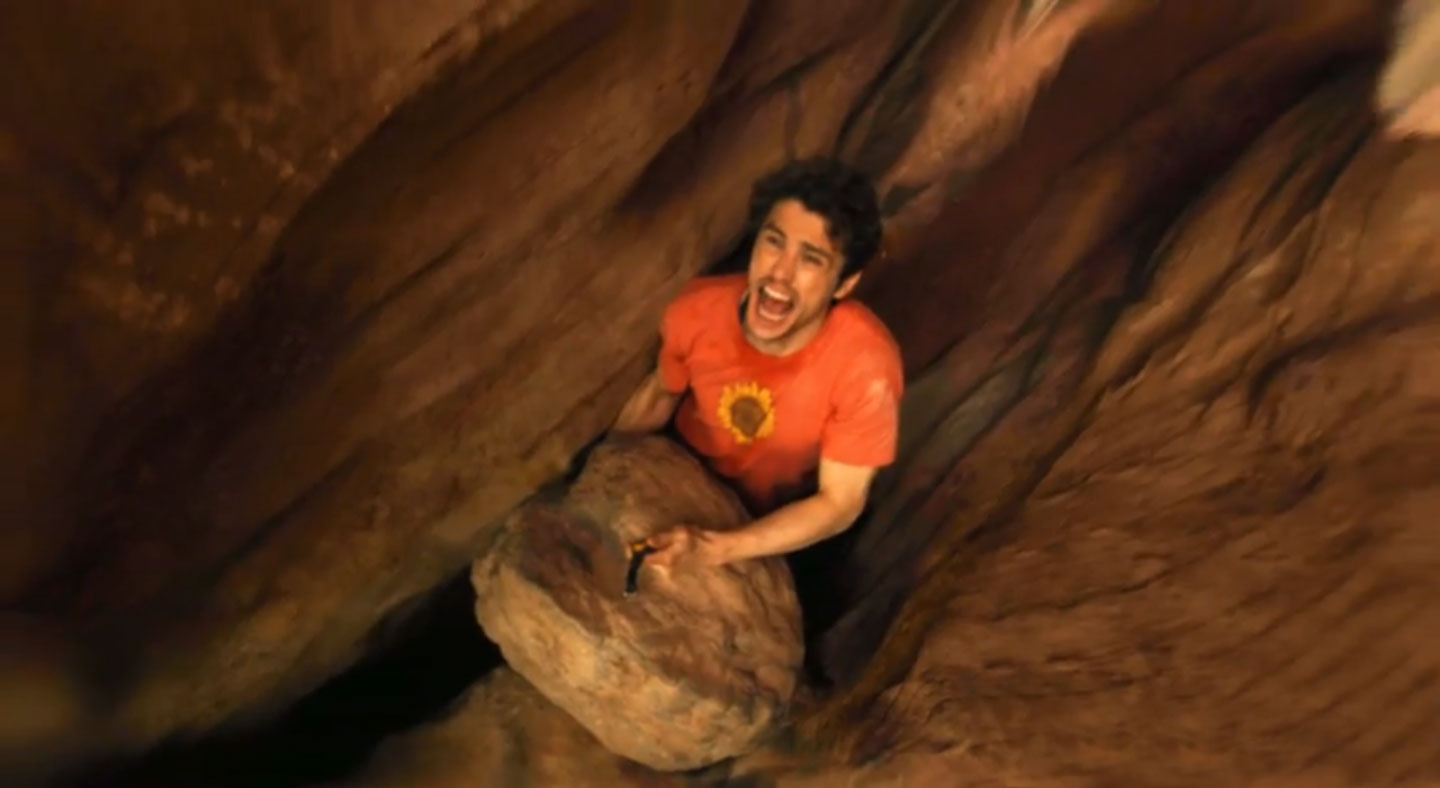 
Farewell To The Flesh...

For the first twenty minutes of 127 Hours, we see Aron Ralston (James Franco) as a free-wheeling, cocky, narcissistic thrill-seeker. He's racing on his bike (and videotaping himself doing so), he finds a couple of girls whom he charms into being their guide and frolicking in a hidden pool, and generally living life.

At that mark, we see Ralston fall. We see him fall into a canyon. We see him fall into a canyon with a boulder falling right behind him. At the end of his descent, his right arm is lodged between said boulder and the side of the canyon, and for the next 70-odd minutes, we get to experience Ralston's 127 hours of hell, hope, hallucinations, and heroics.

Danny Boyle, coming off Slumdog Millionaire, tackles a rather unpleasant subject (the climax of 127 Hours involving cutting off a dead arm) but under his direction, this scene, and the movie as a whole, doesn't go into sensationalism. Instead, Boyle brings an immediacy to 127 Hours, almost a documentary-like style whenever we go to Ralston, which is almost all of the film, and blends this with imaginative and realistic fantasy sequences.

Take for example, when Ralston begins to imagine how the party he was invited to by the two girls he meets (played by Kate Mara and Amber Tamlyn) would be like. It is realistic for someone who is trapped, literally, to have his mind wander off to how things would be different if he were in control, but just when the audience starts to slip into believing this is true we go back to how he really isn't free. This isn't done by quickly going back to Ralston in his canyon but by Raltson at the window, begging for help. Soon, elements of his life: memories of his immediate and distant past, along with fantasies of escape and even visions of the future float to his mind (and in one case, floats him literally away). 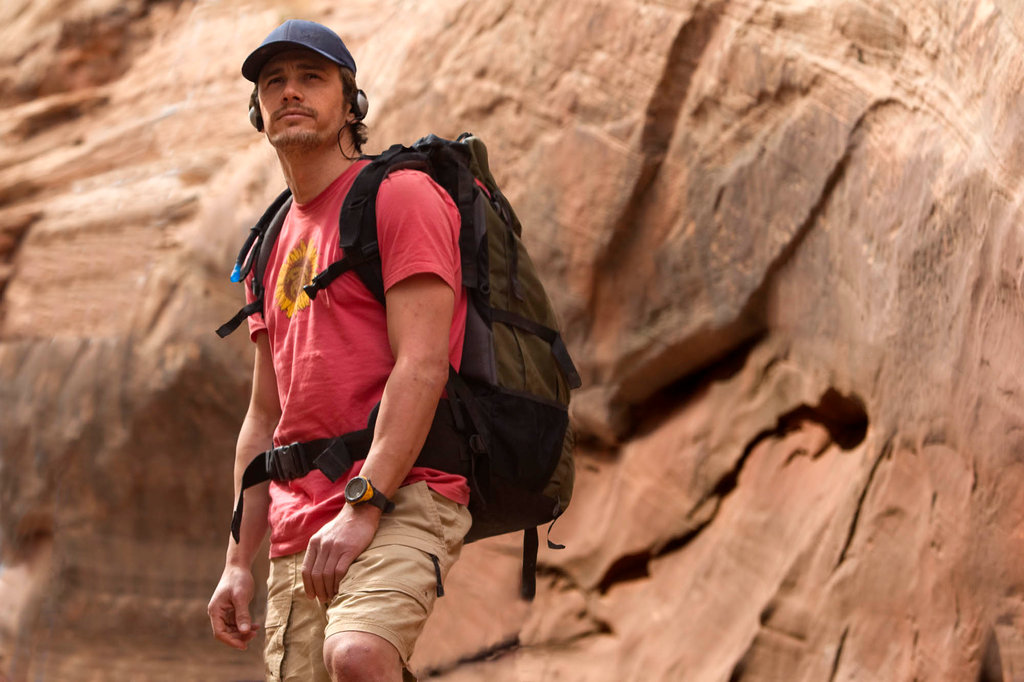 127 Hours rarely allows us to leave Ralston, and this gives James Franco the opportunity to show us an extraordinary performance of full range of emotions: from cocky self-assurance to fear to anger and self-loathing and mockery at how foolish he was at not telling anyone where we was going to sadness at what is to become of him. The success of 127 Hours lies in large part on getting to know and care about Ralston's predicament, and Franco has us care not because he is trapped with seemingly no way out except death but because we also see just how he got to be rather alone.

At first, we sense that he is going through the Utah desert to show off to himself and anyone else who would come across his exploits just how great he is. Over the course of the film, we see how he systematically pushed people away; we see this especially near the end, when he recalls a lost romance with Rana (Clémence Poésy), a woman he lost due to his self-centered life where he convinced himself he needed no one (not his parents, not his sister, not his co-worker/friend) to live his life as he wanted to. Now that Ralston faces his mortality, the thought of dying alone where it will be days before anyone notices is one he not so much rails against but realizes is one he doesn't want.

Franco gives his best performance so far (and remembering his turn in Spider-Man 3, we can safely say he's grown greatly as an actor). Near the end of 127 Hours, when he's observing the video of a message the girls left for him, Franco's face communicates so much of the heartbreak mixed with regret he faces as his life starts to ebb away.

Now, getting on to The Scene. Honestly, I am the type not to get freaked out by graphic violence or the appearance of violence. I wasn't shocked by Cannibal Holocaust when I first saw it (except, perhaps, for the turtle bit), so once we get to his self-dismemberment, we have been prepared somewhat for it. Earlier in 127 Hours, he has already come to the conclusion that with his arm trapped underneath this boulder as long as it has been, it is already dead. He has one of two choices: either die with his arm or take a chance at life by cutting his arm off.

Boyle did two smart things in 127 Hours. First, he was smart in not going the Buried route and keeping us only with Ralston. By allowing us to leave him and go into his mind, we not only get a brief respite from the agony of the situation, but give us that insight into who Aron Ralston is as well as give us some incredible imagery. Without giving too much away, Scooby-Doo is actually almost terrifying in this film.

There's also when we see Ralston conducting a mock (and self-mocking) interview on his video camera (which is where parts of 127 Hours appears to be filmed with). The off-screen audience reactions are things we would be used to from decades of television viewing, but again, it's Franco's performance where in this one scene he shifts so much in his emotional ranger.

Second, Boyle was smart in not denying the difficulties Ralston faced while trapped for five days inside that canyon. He has us go through things like him running out of water and having to drink the only available liquid, and he toys with us when a large rainstorm comes.

Ultimately, while 127 Hours is based on a true and somewhat gruesome story, Boyle and Franco create a hopeful picture, one where the main character dives into despair but emerges with a fierce desire to live. It's almost like a true-life adventure version of A Christmas Carol, where after seeing the Ghosts of Ralston Past, Present and Future, Aron emerges with both optimism and a desire to live life better, both for himself and for those around him.

Once he's finally free, Aron Ralston looks quickly behind at the boulder and the arm still beneath it, and whispers a soft, "Thank you", before running out to escape. Who was he thanking, and why? Was it God as he perceives Him for freeing him? Was it the rock for releasing him from the man he was before falling? Did he see that he had been living not for the day but for himself and now, being given a second chance, he would seize it with greater gusto?

Boyle and his script (co-written with Simon Beaufoy) don't give us answers. We have to find those ourselves.

We're given a quick conclusion to 127 Hours once Ralston finds other hikers to help him. We see him happily married with a son, and we're told he still is a thrill-seeker, with one change: he now tells people where he's going. In its short playing time of 94 minutes, we see how quickly a life can come close to ending, and to a certain point, how quickly it can begin again.

If it weren't true, perhaps 127 Hours might not be believed, but even if it were fiction, it would be an intense, at times comic, but never dull experience.