Entomb With The Times...

Finally, I was surprised at how much dislike Buried inspired among the viewers, though in retrospect I can see why.

Paul Conroy (Reynolds) wakes from a groggy state to discover he is trapped within a coffin, buried beneath the Iraqi desert. He is a truck driver whose convoy was attacked on the night of October 23, 2006 (the date he gives as when they was attacked).

Paul is naturally terrified about his predicament, but he finds that buried with him are a Zippo lighter, a pencil, some alcohol, anti-anxiety medication, and most importantly, a cell phone, one with video and text capability. In the short 95 minutes Buried takes place, Paul desperately tries to contact anyone who can help him (the question of how someone underground can get almost excellent cell phone service being answered by one of the people he contacts: he must not be buried too far deep). Paul calls everyone and anyone he can think of: his wife, their mutual friend, 911, the State Department, the FBI, his mentally diminished mother, the Iraq Intervention military, all in a desperate race to emerge alive. He doesn't have much time, especially when we discover the reason he has been buried: Iraqi criminals put him there to hold him hostage, demanding money for his release.

As it stands, Buried is an excellent exercise in minimalism. You have one set (the film never leaves the coffin save for a quick look at a video the criminals send Paul and a few brief moments of hallucination) and one actor, again, except for the phone video of fellow truck driver Pamela Lutti: (Ivana Miño).

Credit has to be given where credit is due: Cortes finds many ways of shooting Buried within the confines of the coffin with various angles and lighting (variations from the Zippo lighter and the cell phone, though at times you have to see a dark screen with only audio to guide you). Cortes' editing is also first-rate: he emphasizes Paul's growing terror by various techniques, such as cutting closer and closer to Paul's face or spinning the camera to reflect his growing panic. Victor Reyes' score doesn't intrude on the film and manages to emphasize the moments of terror without suffocating the film (pun intended).

Reynolds is the only person in Buried (everyone else save Miño being voices). He gives a performance that simply astounds. One might not think Reynolds (who has built his career on action and comedy films) could reach such a deep, dramatic performance. Reynolds has to hit so many notes: terror and fear, shock and pain, loss, regret, hope, anger, frustration, and throughout the film he never fails in revealing all the conflicting emotions Paul feels.

Ryan Reynolds has an unenviable task: he has to keep the audience's attention, and he is thoroughly up to the task. His performance is one that will surprise people in its richness, its depth, and intelligence.

I will take a quick digression to also compliment the voice acting of Stephen Tobolowsky as Mr. Davenport, the legal representative to the company Paul works for. His cold monotone as he spells out how the company will protect itself against any action Paul may take and in his dispassionate disinterest in Paul's life is chilling but sadly strikes a familiar tone. 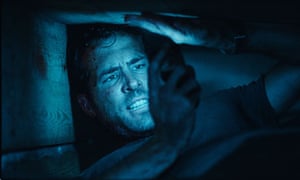 Given all that, Buried is not the masterpiece it could have been and/or aspires to be. Chris Sparling's script at times seems more interested in pointing out the foibles of modern communication than in making those Paul reaches intelligent and caring enough to try desperately to save his life.

I wondered how someone in Iraq could get 911 with the greatest of ease: he didn't even have to dial an international code. I wondered why the Iraqi criminals would imagine someone as lowly as Paul would get anyone to pay $5 million or $1 million in less than three hours. It seems strange that the video Paul made could have had thousands or millions of YouTube hits so quickly.

I wondered why the safety number he was given in case of such an emergency was stolen from the wallet left with him was the one number he apparently never bothered to memorize. The Iraqi criminals suggestion that Paul was working for "Black Water" when they obviously must have known he wasn't seemed more a quick commentary about the evil the Iraq Intervention unleashed among the people than anything else.

Finally, what brings Buried down is the ending. I have never been a fan of twist endings, and while it might not be strictly speaking a twist it felt forced, almost mean-spirited and cruel.

I don't mention audience reactions as a rule, but I'll make an exception for Buried. The sense among those watching the film was one of frustration and unhappiness. I saw a man in uniform and his wife. When the film ended, she got up and was visibly displeased. "Why would you take me to something like this?" she berated him. He got up and looked straight at me. "That was the lamest movie," he told me. "I'm going to write the guy who made The Proposal and tell him he was STUPID for making this movie".

To a certain point, I disagree. I think Reynolds was actually smart for making this movie. It shows he wants to push himself as an actor, that he wants to expand his range and show he can do so much more than his screen persona has so far shown. However, it also shows many viewers would prefer him in more commercial, crowd-pleasing fare like The Proposal and the upcoming Green Lantern (perhaps even such films as Waiting...) than in something like Buried.

There is a danger in alienating your audience. One can applaud their efforts, but they should know that they should try things in increments. Yet I have digressed too much.

One final point: the title sequence is extremely reminiscent of something Saul Bass would have made for such Alfred Hitchcock films as North By Northwest or Psycho. This does not appear to be an accident, and overall it adds to the effect that this will not be an ordinary film.

Overall, Reynolds anchors a strong film with a remarkable performance. However, as good as Buried is, there is almost a nihilism within it that clouds whatever good the film has. At the end of the film, one feels nothing much for it.

In the end, Buried will probably remain an underground film. 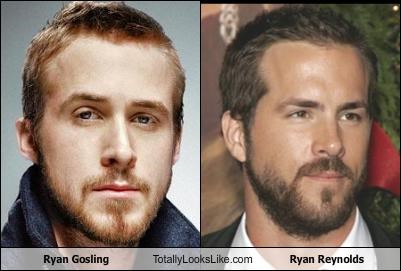 Is it me, or could they be brothers?