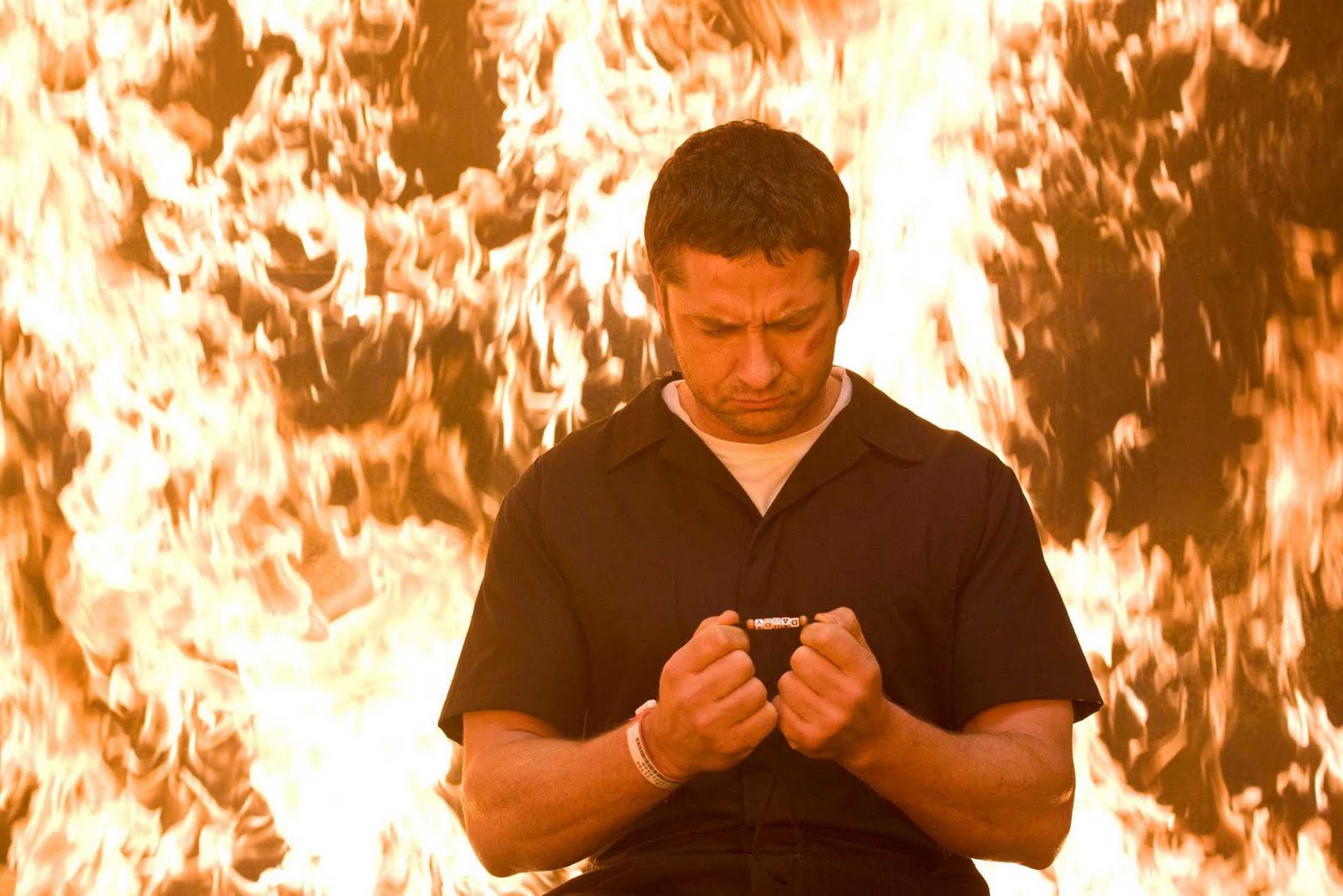 
To my mind, the thinking behind Law Abiding Citizen is bizarre to say the least. How does one cheer for either of the main characters when Kurt Wimmer's screenplay practically demand we hate both of them?

Clyde Shelton (Gerard Butler) is a seemingly ordinary man, with a loving wife and adorable daughter. Within the first five minutes they are the victims of a home invasion by Clarence Darby (Christian Stolte) and Rupert Ames (Josh Stewart). Darby is the more vicious of the two, for while Ames wants to just rob them, Darby comes close to raping Mrs. Shelton and there is a strong suggestion that he murdered the adorable daughter.

The case is handled by Nick Rice (Jamie Foxx), who cuts a deal with Darby: in exchange for pleading to third-degree murder he will testify against Ames and basically send him to Death Row. Shelton is hurt and outraged by how the system has let the man who destroyed his life off so easily. Of course, this calls for vengeance.

Ten years pass. Rice now has his own family (by sheer coincidence, a wife and daughter). Darby is out, enjoying the life of a career criminal while Ames is about to be executed. What is suppose to be a gentle lethal injection turns violent and agonizing. Rice, D.A. Jonas Cantrell (Bruce McGill), and Rice's protege Sarah Lowell (Leslie Bibb) watch in horror, and suspect foul play was involved. Darby is pursued, with only a mysterious voice aiding him, or so it seems. We soon discover Clyde has created an ingenious Master Plan to take revenge on all those who allowed the criminals to get away: besides Ames and Darby, there is Darby's attorney, the Judge, the D.A. and his team of lawyers, even the Mayor (Viola Davis), with Rice apparently being last on the list. Even after Clyde is arrested, then put in solitary, the elaborate murders continue. Where and how will this reign of terror end?

Take for example when Clyde captures Darby after luring him into a rather elaborate trap (side note: why are these plans always elaborate?). Once he has Darby tied down, Clyde goes all Mad Scientist on him and decides that for justice to be served he has to torture Darby by slowly dismembering him while he is alive. To top off his nefarious scheme, Clyde decides to send a DVD to Rice's home, but I'll give you one guess as to who ends up watching it.

As portrayed by Butler, Clyde is someone we can't possibly embrace. It is possible to ask an audience to care about someone whose family was slaughtered in front of him, but how can we ask that said audience continue to care about that same person when he is creating more and more elaborate (sometimes rather outrageous) ways of killing people whose connection to the case is tenuous at best? Sarah had nothing much to do with the case aside from perhaps doing research, so killing her seems more an act of cruelty than justice.

The screenplay tries to make Clyde a Samson of Justice, pulling down the Temple full of Philistines. However, his methods end up being so grandiose that Clyde soon becomes Philadelphia's version of The Joker, this Master Mind Criminal who holds the city hostage. He goes from vigilante to psychopath, and how do we rally to like or approve of a psychopath's actions?

Foxx does himself no favors in Law Abiding Citizen either. We already start out not liking him for having cut this nefarious deal, so when he has to face off Clyde to stop his reign of terror we can't rally around him. Foxx seems almost bored that he has to fight Clyde, maintaining the same expression throughout the film.

Every other actor appears similarly bored, though trying desperately to bring emotion to a project that goes off the rails rather quickly. Ranging from Colm Meaney as one of the investigating cops to Davis as Philadelphia's Mayor, they carry this seriousness that again, just seems like boredom, almost confusion that somehow they ended up there.

The actual plot of Law Abiding Citizen is just so idiotic one wonders how Butler (who has had legal training in his native Scotland) would believe any judge would allow someone who killed two men (even going so far as to videotape the torture and dismemberment of one of them) to be released without any kind of bail, merely because Clyde pointed out some forms of legal jargon that any first-year law student could out-argue.

Regardless of how hard Butler, Wimmer, and director F. Gary Gray try to make Clyde heroic (an injured man fighting against the corruption of the legal system) we just watch and wonder how anyone could rally to this serial killer. One just can't be sympathetic to a master criminal, and in the middle of Law Abiding Citizen we get new information about Clyde that just strips him of this "average man out for justice" status and turns it into a mastermind fighting those unequipped against his genius. Brian Tyler's score is like everything in the film: excessive, loud, intrusive, and overly dramatic without any sense of subtlety.

Law Abiding Citizen is a grotesque revenge film, filled with stupid people and cruel people who come up with excessively elaborate ways to execute people, some of whom should not have been killed. This is a case of 'he fought the law and we all lost'.