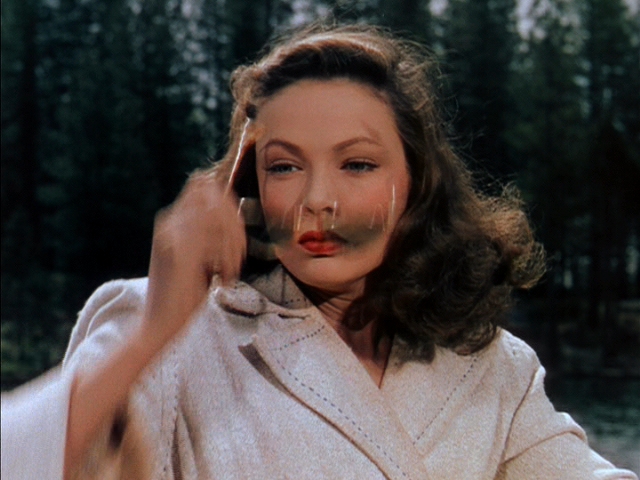 LEAVE HER TO HEAVEN


What Darkness Lies Within Beauty...

Love, I understand, forgives all. However, there is a difference between love and obsession, a blinding overwhelming need to be the only one in the world for one person. Leave Her to Heaven is a beautifully shot film that conversely enters into the heart of darkness, with a brilliant and chilling performance by Gene Tierney as the ultimate in beastly beauty.

Richard Harland (Cornel Wilde) returns to his lakeside home after serving two years in prison. His lawyer, Glen Robie (Ray Collins), then narrates to a friend his true story.

Richard meets Ellen Berent (Tierney) on a train, where she is reading his novel. However, she doesn't realize that he is the author until her family greets them both at the station in New Mexico. They have gathered there to scatter the ashes of Ellen's father, with whom she was passionately close to. Ellen grows fascinated with Richard, seeing a resemblance to her late father. She quickly dumps her fiancee, Russell Quinton (Vincent Price) and marries Richard.

She is totally, passionately, absolutely in love with Richard, and soon demands both in word and deed his total attention. Nothing must stand between her and Richard: not his work as a novelist, not Richard's brother Danny (Darryl Hickman), who is crippled (although never stated it's almost certain he's a polio victim), not their unborn child, and certainly not her adopted sister, Ruth (Jeanne Crain). As Ellen becomes more demanding of Richard's total need, everyone starts fearing to what lengths Ellen will go to be the center of Richard's world.

What holds us in rapt attention to Leave Her to Heaven is Tierney's chilling and powerful performance as Ellen. Tierney is a beautiful woman, and the Oscar-winning cinematography captures her ravishing features. However, her beauty masks her terrifying behavior. The pivotal scene at the lake is one of the most frightening moments in the film, and Tierney's acting gives it the emotional impact.

Throughout the scene, as we watch in horror at what she does, she wears her sunglasses. This is a brilliant move by director John M. Stahl. We can only judge from her face what she is thinking, and Tierney gives us no definite answers. Is she ruthless? Unfeeling? Disinterested? Any other actress under most directors would have let us see in her eyes what exactly she was thinking and feeling at this moment of barbarism, but Tierney and Stahl don't.

Instead, we imagine what is going on in her mind, and that mixed in with what we can see and hear makes it a frightening scene of terror. As if this scene didn't see to what lengths she would go, there is a later scene that only adds even more horror to what kind of woman Ellen is.

Through it all, Ellen can't be seen as truly evil. Rather, she is amoral, who becomes so twisted in her love for Richard that she becomes consumed by it. Ellen's mother (Mary Phillips) captures the essense of her daughter when she says, "There's nothing wrong with Ellen. It's just that she loves too much. She loved her father too much". As we should remember, Ellen sees a resemblance between her father and her husband. Jo Swerling's script signals where all this is going without being overt. Early on in Leave Her to Heaven, Richard is observing Ellen swim against her family. Richard's convinced the younger ones will win. He's told no. "Ellen always wins". The rest of the cast is brilliant. Wilde shifts from a man in total enthrall with the beautiful Ellen into total repulsion and horror at the truth of the monster she truly is. Craig projects an innocence as Ruth, the only true and loyal friend Richard has. She matches Tierney in beauty but also in talent. Hickman also has a sweetness to his Danny in his total love for Richard and Ellen, making it all more tragic and horrifying. Price projects elegance and a righteous fury as the jilted lover who becomes her avenging angel.

We cannot forget Alfred Newman's dark yet elegant score. He knows when to place the music and when not to. The scene at the lake has no musical accompaniment, which was an intelligent decision because it adds to the tension and horror.

Leave Her to Heaven has, perhaps, the flaw that some of the acting is a bit mannered by today's standards. I also thought the framing device of having almost the whole film told as a flashback was unnecessary: we could have seen things in a linear manner. Finally, the ending was just a little too pat and convenient, but understandable for the times.

However, these are a few bits that don't take away from the brilliance and power of Leave Her to Heaven. By the time we get to see to what means Ellen will go, we are totally under her spell. We see a mix of horror and fascination at a woman who loves too much, who believes that everything she's done (even after she's gone) was done, as she declares, "not (out of) hate; love...Richard's love for me". We may even see Ellen is neither evil nor insane, just a woman without a conscience or soul.