The Devil Wears Prada: A Review 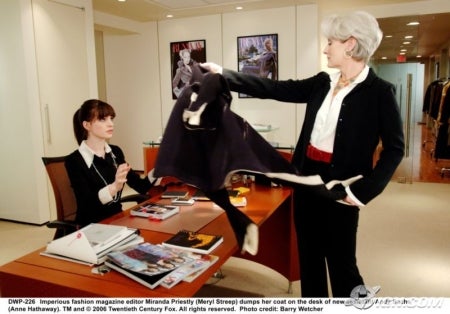 The old axiom is true: clothes are a reflection of who we are. How we present ourselves is who we'd like to be seen by the world. The Devil Wears Prada makes the case that while the fashion industry can be seen as frivolous, even downright strange, that the people who work there really are no different than any of us.

Andrea Sachs (Anne Hathaway), better known as Andy, has landed a plum assignment: second assistant to Runway Magazine editor Miranda Priestly (Meryl Streep). If she stays there for the year, Andy can have the virtual pick of any newspaper or magazine she wishes, for Miranda yields great power in both fashion and publishing.

However, Miranda is a Boss From Hell: demanding and demeaning, one who terrorizes and terrifies all who work under her, from her first assistant Emily (Emily Blunt) to her Art Director Nigel (Stanley Tucci). Miranda's whims are their commands, her views are sacrosanct, expecting everyone to follow her instructions to the smallest detail (no matter how difficult the task). Miranda is an imperious creature, disdainful of the less-than-stylish Andy but secretly impressed by her skills.

Andy tries to balance her life with Miranda against her life with her sweet cook boyfriend Nate (Adrian Grenier), and her circle of friends, Lilly and Doug (Tracie Thoms and Rich Sommer) while fighting an attraction to magazine writer Christian Thompson (Simon Baker). In the time she is with Miranda, she comes to realize that her own ideas may yet be wrong, and that Miranda is both villain and victim. 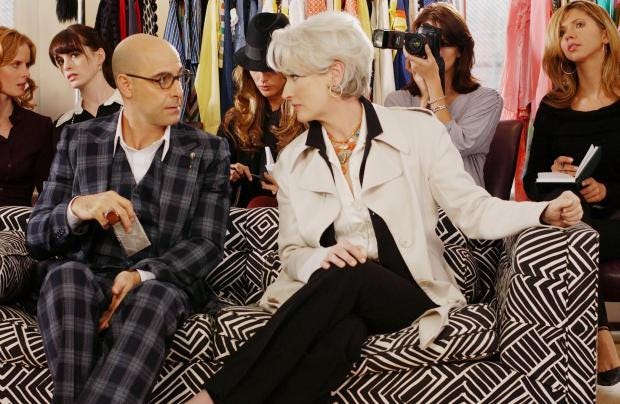 What makes The Devil Wears Prada an enjoyable film is that it is extremely relatable to everyone who has had a job. In the beginning of her time there Andy has so much thrown at her, things she's expected to know and understand quickly. How many of us know exactly how that feels, especially when starting a new job?

The film also does not make fun of the characters. Rather, the comedy comes from the situations they are in as opposed to merely laughing at them. It would have been easy for director David Frankel to go for making people like Miranda, Emily, or Nigel silly, but he and scriptwriter Aline Brosh McKenna (adapting Lauren Weisberger's novel), instead decided that they would give them a method to their madness.

This is best shown when Miranda takes Andy to task for laughing about the staff being unsure which belt to use for an upcoming photo shoot. While Andy (and the audience) may see the belts as identical and the whole idea of being in an intellectual quandary about something as simple as a belt laughable, Miranda goes into a logical explanation about how Andy may think she's above them all but that in reality their decisions both set trends and have wider impact in the fields of employment and innovation, right down to Andy's sweater color.

It's this respect for the culture within a corporation/organization that makes The Devil Wears Prada less a film about the fashion industry than a film about a common experience: the work environment. Conversations about how to do certain tasks at a job site may sound strange, even laughable, to those looking from the outside in, but to those in those jobs they realize that they are only trying to make their jobs more productive.

Understandably, the star of The Devil Wears Prada is Hathaway, and she does a wonderful job in showing the transformation of Andy from intimidate girl to a more confident woman. She also communicates the physical transformation of Andy. In the early part of the film, she is almost proudly contemptuous of the emphasis those at Runway place on clothes and clueless about anything those in the magazine would consider basic information (she for example, asks a person on the phone how to spell Gabbana, believing it to be an actual Mr. or Mrs. Gabbana). Later, under Nigel's supervision, she comes to realize there is nothing wrong with improving one's appearance, not just to fit in, but also to boost self-confidence. There are also some wonderful performances by supporting players. Blunt is delightful as Emily (side note: one wondered, given Miranda's penchant for referring to Andy as Emily, if this was her actual name or just a generic name the fashion editor gave to her assistants). Blunt has a marked ability for mean-spirited comedy, where we tend to dislike her for being so harsh and snobbish with Andy but who we also see as both adoring and terrified by her idol Miranda. The scene where she realizes she will not be fulfilling her long-held dream makes Emily both shallow and mean yet oddly endearing, which we credit to the fact that Emily finally starts to eat.

Tucci serves as both a dismissive superior of Andy and as a mentor of sorts, guiding our heroine in her new role as a budding fashionista. He is sharp but never overtly cruel with her, but tells Andy basically she is being foolish in how she is tackling the hurdles of Runway and what she can do about it.

Baker and Grenier seem to play variations of themselves: the former a suave ladies' man who attracts women easily while the latter doesn't seem any different from Vincent Chase on Entourage. This isn't to say that they weren't good in the film: both were pleasant enough. It's just that it doesn't make full use of whatever talent they may have (a stronger case for Baker can be made than can for Grenier).

We now turn to Meryl Streep. She is ice cold as Miranda, a woman who never shouts or even raises her voice when cutting someone down. Streep gives Miranda a coolness that shows her to be not oblivious but disinterested in how others are affected by her demands. Miranda cannot comprehend how Andy cannot get any airplane to fly her out of Miami just because a hurricane is pounding the city. She is the type of woman who expects to be obeyed, to have her Starbucks ready at the moment she calls for it, and to have not one but two copies of the unpublished Harry Potter novel at the ready.

Yet Streep is too intelligent and talented an actress to go for straight parody (even of Vogue editor Anna Wintour, highly suspected of being the inspiration for Miranda). Streep has a scene where she allows the mask to slide ever-so-low, revealing she has human hurts and emotions just like everyone else.

Not everything about The Devil Wears Prada is good/perfect. We have an unfortunate cliché in that Andy has to decide between going to Nate's birthday party and Miranda's benefit...which fall on the same night. Why do these sort of things always happen in movies? The break-up between Nate and Andy wasn't the best bit of acting, which was unfortunate given that for most of the film both Hathaway and Grenier had given pretty good performances of a regular couple deeply in love with each other.

Still, these are minor flaws. The Devil Wears Prada is a light, enjoyable film, one that even those who don't know their Oscar De La Renta from their Oscar De La Hoya will appreciate. The film is a very good fit.