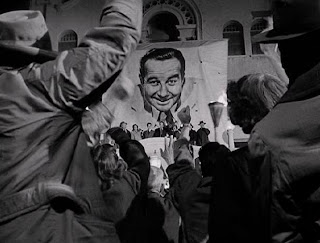 The saying is not, "power corrupts". Lord Acton's actual phrase is "Power TENDS to corrupt, and absolute power corrupts absolutely". All The King's Men, the film based on Robert Penn Warren's Pulitzer Prize-winning book, makes this axiom come to life while giving it an American twist. Politics has always made for a fascinating subject in film making, and All The King's Men, in spite of time, has not aged in its view of the corrupting nature of power and its dangers on almost everyone it touches.

It was only three years between Warren's novel had been published and the film. The man who is supposed to have inspired the fictional character of Willie Stark, former Louisiana Governor and then-Senator Huey P. Long, had been assassinated in 1935. Therefore, most of the audience watching All The King's Men would have, in a sense, been watching Long's story as how it was imagined, or at the least be familiar with the details of the larger-than-life, only-in-America story of a powerful Southern politician who was beloved by some, hated by others, and known to all.

Journalist Jack Burden (John Ireland) hears of a local man who is fighting a one-man campaign against the good-ole boy network running the county in an unnamed Southern state. This man, Willie Stark (Broderick Crawford), is sincere in his struggle, but lacks an education: his wife, schoolteacher Lucy (Anne Seymour) gives him his schooling. Burden is impressed by Stark's willingness to fight against the system, even if it means physical intimidation, even violence.

Stark had warned that shady deals had been cut to build the local school, and after a tragedy there Stark's reputation begins to rise among the populace. Soon, he is recruited to run for governor, at first unaware that he is really there as a stooge to split the 'hick' vote. Once he learns the truth from Burden and Stark's minder, Sadie Burke (Mercedes McCambridge), Stark is filled with a righteous fury against the political machine. Stark soon builds a machine of his own, helped by 'the people', and he gains election to Governor. Burden's fiancee, Anne Stanton (Joanne Dru) becomes enthralled with Stark's version of "Hope & Change", while her brother, Adam (Shepperd Strudwick), is more suspicious.

Soon, Stark becomes just as tyrannical and corrupt as any Roman Emperor, manipulating the people to do his bidding while trying to manipulate, and in some cases, suppress whatever negative press and opposition there may be to him. In his beliefs that "the ends justify the means", he gets Burden to dig up all the dirt of his political rivals, including Judge Stanton (Raymond Greenleaf), Anne and Adam's father whom Burden admires greatly. Stark also has a corrupting influence on his son Tommy (John Derek), a star on the University football team. Stark also begins a series of affairs: having already seduced Sadie he soon discards her to make the elegant and patrician Anne his newest mistress, an easy task given just how besotted she is with Stark. Stark's ambition grows greater, as does his danger. In his drive for greater power (always for the greater good), Stark destroys the Stanton family and Burden, with Adam finally taking the ultimate step against Stark.

Under Robert Rossen's direction, All The King's Men has almost a documentary-like look, as if this were not so much a movie but a true-life experience, as if Stark were real and we were watching his life unfold before us. Take for example, the Victory Rally to Stark's election.

The extras look like average people celebrating the election of one of their own, and the camera angles (along with Al Clark's editing), create a sense of almost cinema verité, a bit like newsreels contemporary audiences would have been familiar with. At the end, Rossen brilliantly captures the chaos the assassination creates for both the people and the characters. Rossen (who also wrote the screenplay) also balances the colliding stories between Stark's rise and Burden's eventual disillusionment to the corrupting forces around him. Rossen does this with clever, subtle bits. In the beginning, Stark doesn't drink because his wife disapproves. Near the end, not only does Stark drink heavily (and wear a monogrammed bathrobe, denoting his growing ego), but goes so far as to offer a drink to his wife.

The writer-director-producer gives his characters balance, almost never making anyone all good or all evil (with the possible exception of Mrs. Stark, who is portrayed positively, though strongly hinted that she knows about Stark's mistresses and angrily tolerates them).

At the center of All the King's Men is Stark, and Broderick Crawford gives a brilliant performance. You start out liking him when he fights the good fight, and like Burden, watch with growing sadness as his drive starts becoming monstrous in his lusts and appetites. Ireland as Burden also shifts in our eyes, from the eager aide to Stark to a man so brought down by the compromises he's made to stay at Stark's side that he helps destroy all those he truly loves either directly or indirectly.

McCambridge doesn't shift from the operator Sadie is. She is always cynical about what good politics can be, but she also tells us that she is a woman who can be hurt. Take the scene when she finally tracks Burden down after he hides out to not give Stark incriminating evidence against Judge Stanton. She looks at a picture of Anne that Burden has, and compares herself (Stark's former mistress) to the more regal and elegant current mistress. McCambridge expresses both a resignation and regret at having been cast aside, and at having seen just how far Stark has fallen from who he was and could have been to what he has become.

Going back to Lord Acton's axiom, the second part holds true in All The King's Men. Stark had become all-powerful: naming things after himself, taking over the newspapers and radios, even suggesting that a newsreel shown to him about him remove the closing line of, "Willie Stark: Messiah or Dictator?" Whatever noble qualities he had were swallowed up by his lusts for power, women, and drink (the film appears to suggest that alcohol is a cause of Stark's spiritual corruption). It's an age-old story: how even the best of men soon find themselves more interested in power than in doing good, and even whatever good they give (such as a hospital and roads to the citizenry) is undermined by the shady and corrupt deals they cut to maintain power.

As a side note, I couldn't help reflect on current American politics while watching All The King's Men. I thought of the populism espoused by those like Sarah Palin, thinking that such lines that Stark spoke like, "And no poor man's land can be taxed or taken away from him" would appeal to the Tea Party Movement members.

I thought about the idolatry inspired by President Obama. At one point, Burden tells Anne, "There is no God except Willie Stark. I'm his Prophet and you're his..." that last part left unspoken but understood. While it quotes the Islamic creed of Shahada (There is no God but Allah, and Muhammad is His Prophet), it brought to mind a T-shirt I saw someone wear during the 2008 Presidential campaign. The shirt read, "The Only Truth Before Us Is Obama".

A sentiment like that is similar to something near the end of All the King's Men, when a caravan of Stark's supporters descends on the capital. A bus had the banner "Willie's Law Is Our Law". Even that line about "Messiah or Dictator?": that mindset is being applied to the President, who is seen by some in an almost divine-like light and by others as almost a usurper and secret Socialist/Muslim. The Faith and Fear any politician inspires (Stark/Long, Roosevelt, Kennedy, Reagan, Obama, Palin) these things do not change, which makes All The King's Men still resonate today.

It is surprisingly nonpartisan, not going after one political philosophy but to the dangers of unchecked power.

At the end of All The King's Men, we still have a mystery about Willie Stark. Was he truly evil? Was he just a good man corrupted? His final words were a meditation about what he could have done. "It could have been the whole world, Willie Stark", he says before he dies.

What was he thinking about? How he gained the whole world yet lost his soul? How he could have ridden his populism to the Presidency? Was it a regret for what he had become? Was it anger about what he would never achieve? Those questions are left to us, the audience, to answer.

All The King's Men has brilliant performances and a deft story that rings true (sadly). Long never made it to the White House, but his influence has lingered within the halls of power from City Hall to the Halls of Congress. All The King's Men truly is a Stark picture.

Please visit my Best Picture Winners Retrospective for more reviews. Also, visit the review for the 2006 remake and a comparison of both films.