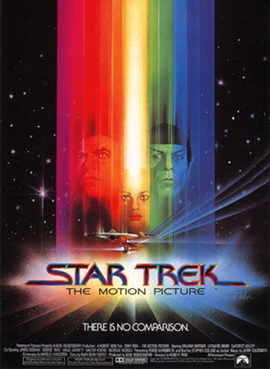 In Space, No One Can Hear You Snore...

I figure Trekkies were jumping for joy in the basement of their parent's home when they heard that at long last, Star Trek, their all-time favorite television series, was finally getting the big-screen treatment.

All the original cast was coming back!
Two-time Oscar-winning director Robert Wise as director!

It would have all the advantages of film: a vast canvas, big-budget effects, a grand plot. What could possibly go wrong?

Judging from Star Trek: The Motion Picture, the question should have been, 'What could possibly go right?' The Motion Picture had everything a Star Trek film debut could have asked for...except story, pacing, and human interest, and that's just for starters.

There is a mysterious force that is headed for Earth. This menace (which looks like a large blue cloud in space) has already destroyed a fleet of another species, and there is fear that it is coming to destroy our planet. There is only one ship within travelling distance to intercept and perhaps destroy this threat: the U.S.S. Enterprise.

Into this menace comes Captain James Kirk (William Shatner). He retakes command of the Enterprise, much to the anger of its current captain, William Decker (Stephen Collins). Kirk uses his influence to get Dr. Leonard "Bones" McCoy (DeForrest Kelley) aboard, although the surly doctor is extremely upset about being dragged up there. It's even more irritating considering there already is a ship doctor, one Dr. Christine Chappel (Majel Barrett).

We see the engineer (James Doohan), Scotty (right down to his Scottish accent). The crew includes Uhura (Nichole Nichols), Chekov (Walter Koenig), Sulu (George Takei), and a new member, Commander Ilia (Persis Khambatta--perhaps the most remarkable name in Star Trek or really all film history). Also coming aboard, after completing an extra-terrestrial version of a vision quest, is Mr. Spock (Leonard Nimoy), whom I understand is a half-human, half-Vulcan (beings who purge all emotion from within them and rely purely on logic) and who is, or was, the science expert on the Enterprise.

The Enterprise finds this menace, but not before this force abducted Commander Ilia (who was once a love of Decker's). Her physical form is returned on board, and tells the crew that an entity named V'Ger is approaching Earth in search of The Creator. 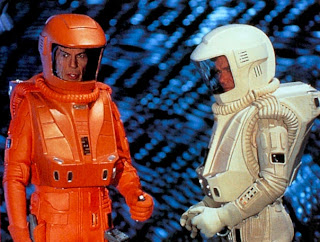 There are certain words that best describe The Motion Picture: glacial, reverent, ponderous, but they might be the wrong words. For example, calling its pacing "glacial" might imply that it actually moves. These are the problems with The Motion Picture, problems that for a newbie, one who has little or no knowledge of Star Trek mythology, will drive him/her insane:

All these brought together make The Motion Picture a slow, dull, lifeless exercise in nostalgia for die-hard Trekkies but will make the rest of the population wonder what all the fuss was about.

Let's start with Problem One. If you have never seen a single Star Trek episode (or in fact have never heard of Star Trek, and it is possible to have done so), you will have at best only the vaguest idea as to who anyone is. For example, a non-Trekkie/Trekker will not know that Dr. Chapell started out as Nurse Chapell in the original series. It's nice she got to play the part she was intended to play by her husband/Star Trek creator Gene Roddenberry, but how are we non-Trek fans suppose to know that?

How are we to know what the relationship between Spock and Kirk are? We don't know anything about Chekov, Uhura, Sulu: the dynamics between them, what they've been doing all this time, so the non-Trek viewer will have no vested interest in whatever happens to them. For example, how are we to know Scotty has that nickname because his last name is Scott and not because of Doohan's always broad, broad, BROAD Scottish accent?

Take this as the prime example of how Problem One causes difficulty. I wrote earlier that this force, V'Ger, has already destroyed a fleet of another species. How will someone who hasn't spent hours, days, weeks, months, years, pouring over all things Star Trek possibly know that these are the Klingon?

We don't have a clear idea of who/what they are, and that's because The Motion Picture isn't made for a general audience. It's made for fans, and if there is one thing I hate when one adapts a book/television series to the screen is when it's made strictly for fans. I have long argued that an adaptation should invite all those not in the know to enjoy what those on the inside already love. I could hear in my mind all the Trekkies whispering in hushed tones when they see the Enterprise for the first time on a massive screen. Those of us not into the mythology won't be as overwhelmed with it as they will be.

This, curiously, leads us to Problem Two. Throughout The Motion Picture there is this stillness, this hushed reverence for what is going on in the film. There is this quiet tone that dominates The Motion Picture, as if we are all supposed to be awed by whatever is said, seen, or done, as if everything is historic rather than entertaining. When Kirk goes back to the Enterprise, there is this quiet as he sees the ship he commanded for the first time in I believe five years. He doesn't look excited. He doesn't look happy. He doesn't look like someone who's been given a new lease on life or another glorious adventure. He looks like someone who's been granted an audience with the Pope before being publicly declared a heretic.

There really is no action throughout the film. The crew sees the destruction of the Klingon fleet and there is really no reaction from them, just awe at the fact they were in The Motion Picture. This stillness, this reverence for what is basically a sci-fi movie kills whatever sense of excitement and adventure there should be.

The best example of this is when Mr. Spock finally arrives on board. Wise and screenwriter Harold Livingston (from a story by Alan Dean Foster) could have built up what would be a great, climatic moment. This is the arrival of Mr. Spock, one of the most iconic characters in television. Instead, he just appears, and in the stilted acting of the entire cast, his arrival is no more exciting than if someone had just delivered the pizza. A great opportunity lost because we were suppose to be so thankful that Star Trek finally has a film version that an actual story was lost in the process.

With Problem Three, it comes from the fact that we are told constantly just how close this cloud is from the Earth (three days, two days, and so on) but oddly, no one seems even the slightest bit concerned, worried, excited; in short, there are no emotions. It's as if everyone got their Vulcan on.

This force, V'Ger, can destroy anything coming at it, but no one acts as if their lives are at risk. There is no sense of urgency, no sense of danger, but a strange detachment from any real emotions.

The issue with Problem Four brings about some moments of unintended laughter. There's a lot of staring about in The Motion Picture, especially when the crew on board the bridge is staring out at the vastness of V'Ger. I counted the number of times McCoy was on the bridge without any dialogue: it was twice where he showed up for no reason, said nothing, then disappeared.

My theory as to why Kelley did this was to remind those in the audience still awake that he was still in the movie, since his presence wasn't needed on the bridge...or in the movie overall to be honest.

When V'Ger attacks the ship, it looks like the crew is doing their version of The Robot. Particularly bad is Collins, who is a good actor but who finds himself giving one of the worst performances in the film. The scene where he learns he's being demoted is a really awful bit of acting, but he's just the tip of the iceberg.

At least once Shatner is up to his old tricks, when he tells Decker, "Stop...competing with me, Decker", giving one of those pauses within a line of dialogue that he was notorious for on the series. Khambatta doesn't do herself any favors. The following line had me howling with laughter, and not just because it was unintentionally funny, but because her delivery made it even more hilarious:


"My oath of celibacy is on record, Captain".

Alas, we lost our chance for a good love scene, but given that no one on board the Enterprise could muster even a hint of emotion, why would we see love when we saw nothing else?

There is a giant build up to what V'Ger could be, but once we discover what V'Ger actually is, one is left with a sense of frustration mixed with laughter. V'Ger's identity has to be one of the silliest and most idiotic reveals in science-fiction history. I rolled my eyes and thought the whole ending is really foolish and dumb. Given how silly, foolish, and dumb The Motion Picture was throughout, it seemed fitting.

This isn't to say that everything about The Motion Picture was awful. The film has some beautiful imagery of space, including the interior of V'Ger, and rightly earned its Best Visual Effects Oscar nomination.

The best thing of The Motion Picture is Jerry Goldsmith's beautiful and brilliant Oscar-nominated score, which includes one of the most sublime musical themes in history. The opening theme is simply remarkable. I won't argue Alien had better Visual Effects (hence its win at that year's Academy Awards) but I do wonder if the music for that year's Best Original Score winner, A Little Romance, could equal the elegance and excitement of The Motion Picture, which was so excellent that it was used as the theme for the Star Trek: The Next Generation television series.

Pity the film itself couldn't reach the same level of excellence of the score.

Star Trek: The Motion Picture might be enjoyed by the Trekker/Trekkie, but for those of us who aren't familiar with the franchise, it is a very tedious film. It was too busy being "important" to be "entertaining" or "good". It won't serve to help you understand or introduce this cast of characters, and that's one of its greatest flaws.

The tagline for Star Trek: The Motion Picture should be, "To Boldly Snore Where No Man Has Snored Before".

Next Star Trek Film: Star Trek II: The Wrath of Khan
Posted by Rick at 10:15 AM