As I look at all those who are in The Expendables, I keep coming back to one major point: They Are Old. The combined age for all the members of The Expendables is 346, with the median age being 49. Jason Statham is the youngest of the crew at 43, while Stallone is one year from qualifying for Social Security at 64. My Mexican mother has an expression that translated goes, "They're too old for those dances". A looser translation would be, "They should act their age".

The Expendables doesn't go for that. Instead, it's going for that "one last hurrah" deal. Few films revel in their own trashiness, their own pointlessness, their own clichés, their own total lack of intelligence or coherence. I don't know if it's a throwback to those 80s films that Stallone and Company made, but conversely, the idiocy of The Expendables is its saving grace. Otherwise it would be thoroughly unbearable.

We begin with an intro as this group (called, what else, The Expendables) launch a rescue operation against a group of pirates. We have the leader, Barney Ross (Stallone), and his right-hand man cum best friend Lee Christmas (Statham). Also in the group is Ying Yang (seriously, that is his name) (Jet Li, 47), Gunner Jensen (Dolph Lundgren, 52), Toll Road (I heard Toad) (former Ultimate Fighting Champion Randy Couture, 47), and Hale Caesar (no, by this time we should get that these are either code names or really bad puns) (former NFL player Terry Crews, 42). Jensen is beginning to crack under the pressure, and Ross is forced to let him go.

After their successful rescue, Ross is approached by a mysterious agent who calls himself "Church" because they meet in a church (Bruce Willis in a cameo role). He hires the Expendables to go to Vilena to overthrow General Garza (David Zayas). However, things get complicated when Ross & Christmas discover that Sandra (Giselle Itié), the beautiful contact on Vilena, is El General's daughter.

The real power behind Garza is James Munroe (wonder why he wasn't called something like Chester A. Arthur) (Eric Roberts), a renegade CIA officer who has turned Vilena into a narco-state, aided by his henchmen Paine (dear God why can't I stop laughing at all these names) (ex-WWE or WWF or whatever it's called now superstar "Stone Cold" Steve Austin, 45) and one simply known as The Brit (Gary Daniels, 47). At first, Ross is going to decline Church's offer, but when his other friend (and I suspect honorary/ex-Expendable member) Tool (Mickey Rourke, 57) recalls his regrets about an earlier mission, Ross feels compelled to go (otherwise, we'd have no movie). His crew joins him, although one of them has set Ross up (one guess as to who you think "must break him"). Eventually, they go to Vilena and have an intense battle royale to see who will win out in this war.

Let's put our cards on the table: The Expendables is not smart, clever, intelligent, original, and has no real acting or story altogether. It has loads of violence (how should one react when they see an upper body literally blown away, let alone several heads blown up and having someone's neck snapped back), big explosions, big dramatic entrances, and loads of rather unbelievable action. The only thing that was missing to complete its cliché checklist was a love scene, and while you'd think Sandra would be game for it (as all Latinas would be in Fantasyland), there was none.

Having said all that, The Expendables at least for the most part knows what it is: a dumb, stupid action flick that serves no purpose other than to wallow in death, destruction, and absolute idiocy. 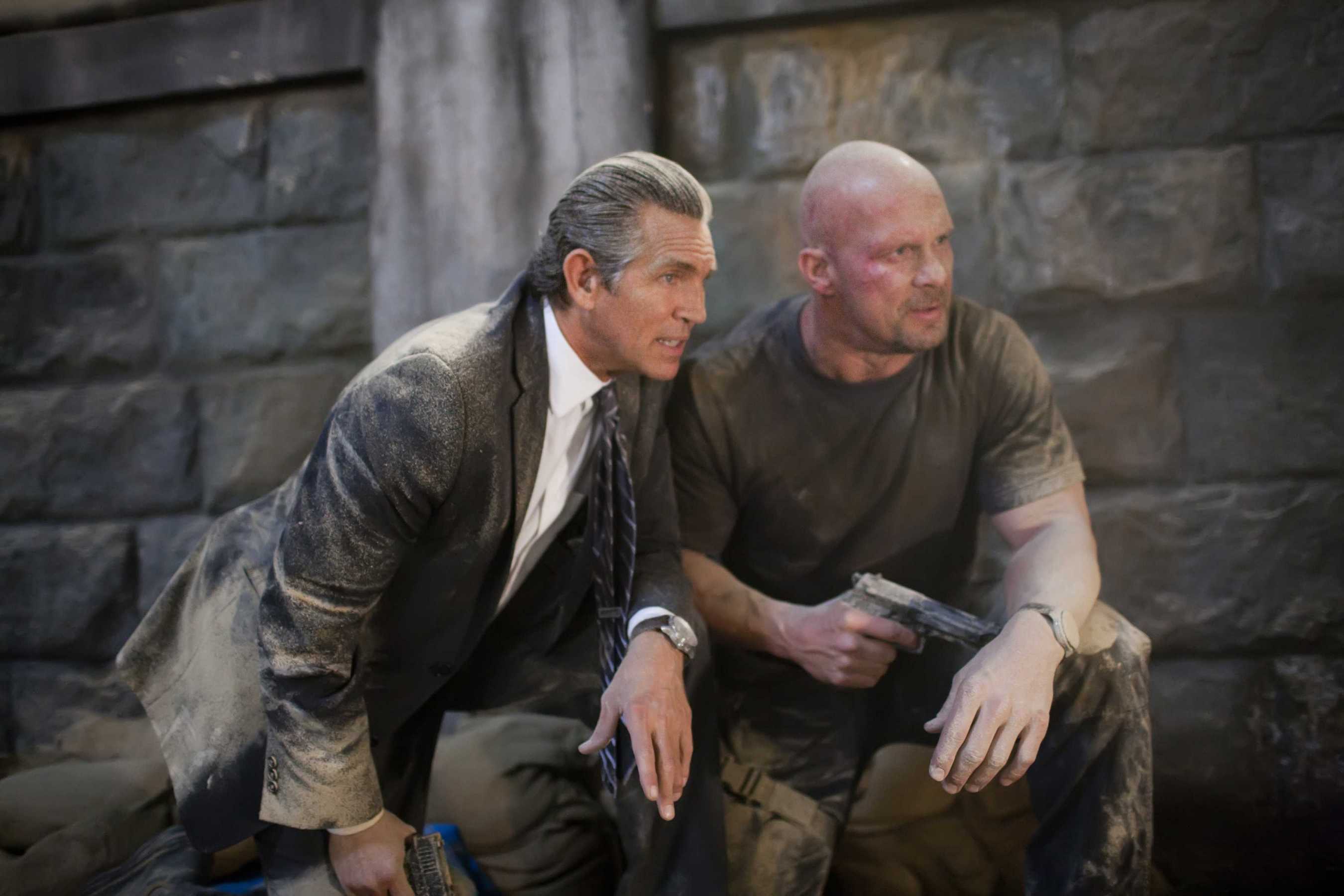 Stallone's script (co-written with David Callaham) goes astray often. We get only one actual attempt at a character with Statham's Christmas (though I digress to say there's nothing merry about him--why should Stallone, who also directed, be the only one with bad puns). This comes in the form of Christmas' romantic relationship with Lacy (Charisma Carpenter, which I trust is her real name), whom he loves but who finds herself involved with another man...one who, shall we say, gives her the Chris Brown treatment. Yang mentions he has a family, but we never actually see any family, while Caesar and Road appear to have no existence outside the group. It's a strange thing that in The Expendables it's Garza who seems to be the most real person since he has an actual hobby: he paints, and we see him paint. Everyone else except for Tool just lives to fight.

Perhaps it isn't a surprise that a lot of the focus of The Expendables is on Jason Statham. Like Stallone, he is building his career on action films. Unlike Stallone, I would argue that Statham is not an actor but rather an action star. Don't get me wrong: there is nothing wrong with being an action star, but Statham hasn't been called upon to take roles offered to someone like Jude Law or Paul Bettany. While Law and Bettany have tried their hands at action (Repo Men, Legion), Statham has yet to appear in a costume drama.

It would be interesting to see Jason Statham as Fagin in Oliver!  Maybe in Oliver! II: Fagin's Revenge...

Here is where we go into a discussion of acting: there wasn't any. "Stone Cold" Steve Austin (in fairness, he doesn't use the "Stone Cold" moniker in The Expendables, but I just love saying it and that is how I know him) has about twenty lines, the first which he says about halfway into the movie.  People didn't actually act as say silly lines of dialogue without breaking up laughing if they stopped to think about what they were actually saying. Roberts has this doozy after killing someone in the back,

Now we can see inside of him, and I see lies.

How can you not laugh at that, especially at Roberts' so wildly over-the-top reading, or when Statham (after having walked to Lacy's boyfriend John Wayne-style and punctured his basketball) tells the guy,

Next time I'll deflate ALL your balls.

Those lines are either consciously or unconsciously cheesy, which would make Stallone either brilliant at how he reads his target audience or amazingly inept at writing things that sound real. Given he wrote Rocky, I want to say the former, but given he hasn't written anything that comes up to Rocky, it might be the latter.

Let's be frank: there was no acting in The Expendables because that isn't what is required. This film isn't about ACTING; it's about ACTION. There is one exception to this: the scene where Rourke as Tool recalls his mission in Serbia (or Bosnia, I can't recall). It was a deft and surprisingly touching and beautiful piece of acting, but it looked as if we'd wandered into another film altogether.

The action scenes were entertaining and massively outrageous to the point where credibility is broken (seeing the Presidential Palace collapse like that you'd think someone would have noticed) but again, with The Expendables, we're not suppose to get a Werner Herzog exploration into the dark recesses of the human heart; we're suppose to get big blasts with as little thought as possible.

All that could be enjoyed, but at times The Expendables fails at being this homage/throwback to big action films the co-owners of Planet Hollywood made their reputations on. The long-awaited teaming of Stallone, Willis, and current California bankrupter...I mean, Governor Arnold Schwarzenegger (63) was beyond pointless. It didn't add anything to the plot, was totally gratuitous , and what's worse, they shared virtually no screen time whatsoever.

If Stallone had more imagination or thought things out better, he might have had Schwarzenegger and Willis appear either as different characters or in a different setting (perhaps Arnie could have been on Vilena setting the ground work for The Expendables, for example). The only good thing that came out of it was when Arnold is leaving. Church asks what his problem was. Ross replies, "He wants to be President", which made the audience laugh. Yeah, we get it (thank you, Constitutional requirements for President).

In spite of all its flaws (and boy, does it have them) The Expendables can be a pretty good time. I know the audience I saw it with thought so: when Ross is going to tell Church he won't take the job, someone from the audience said loudly, "You can't tell Bruce Willis no". When people get that into the film, you can say that they are having a good time...and that you might too.

It could also say that we truly are coming to The End of Western Civilization, but I digress. Here's my advice and conclusion: You'll have a good time at The Expendables. All that is required is for you turn off your brain.