There is something undeniably trashy about Piranha 3-D, and what's more, it's totally unapologetic. This film has no real reason for existence except a mad desire to have you laugh at its own ridiculousness and atrociousness. It has the intelligence to not take itself seriously at all, freeing everyone to be as campy and outrageous as possible. Piranha 3-D in that sense is a wild success.

It's Spring Break in Lake Victoria, Arizona (which might explain the lack of Hispanics, but I digress). That means only one thing: bountiful booze and boobies! Yes, the crew of Wild Wild Girls is here, headed up by WWG impresario Derrick Jones (Jerry O'Connell). He gets a local kid, Jake Forester (Steven R. McQueen), to scout locations for his latest 'film'.

Meanwhile, Sheriff Forester along with her Deputy Fallon (Ving Rhames) are investigating a gruesome discovery: a body apparently devoured that's washed on an isolated part of the lake. She is aided in her investigation by a group of seismologist, headed up by Novak (Adam Scott), and his team: Sam (Ricardo Chavaria, at least one Hispanic in Arizona), and Paula (Dina Meyer). There, they make a shocking discovery: a school of mad piranhas has emerged from a long-hidden underwater cave that an earthquake has opened.

While all that is happening, Derrick is too enamoured with filming his bevvy of beauties to care about what is going on in the isolated cove Jake's taken to. Soon, the sight of Jake's siblings stranded on an isolated island forces them to leave, and soon enough, the piranhas go after them. Soon both stories converge with even more madness and mayhem. 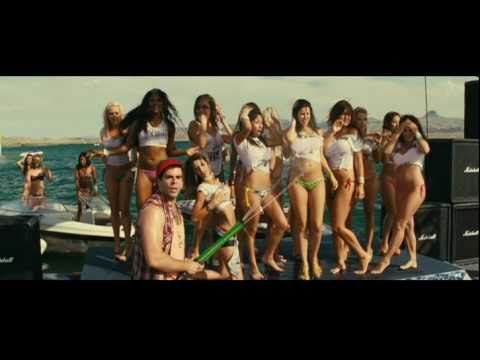 In all of this, you are supposed to be laughing, because the point of Piranha 3-D is that none of this is to be taken seriously. You're supposed to delight in the gruesomeness of it all, of how people are devoured left right and center. The scene where they try to get the party goers out is one wild gore-fest. It's as if director Alexandre Aja and screenwriters Peter Goldfinger (is that his real name?) and Josh Stalberg found new ways to kill people. It's a credit to the material and the way it was handled that what in a true horror film would be shocking here is hilarious.

Take when a beautiful bare-breasted woman is being dived in and out of the water. Her last time leaves what would be a horrifying imagery, but given how it shown, well, yes, there is a bit of shock but mixed with some laughter.

This is carried by the acting. O'Connell doesn't even pretend to give Jones any sense of depth: he's as shallow as they come. He delights in being sex obsessed. This is in contrast to Shue, who gives a strong performance but who also is in on the joke. McQueen, basically making his feature film debut, brings a young man's earnestness, lovelorn desire for the girl he can't quite approach, and action. He shouldn't be ashamed that he is in Piranha 3-D (one of his grandfather Steve McQueen's early efforts was in The Blob, so the family is familiar with horror/comedy). His performance is pretty good, not overtly campy but as serious as the material will allow.

Lloyd goes all out in being all crazy, which adds to the overall effect of the film not trying for anything other than a silly good time. Scott has major points knocked down due to Leap Year, but here, he also seems to be in on the joke, putting in the urgency that Novak would have.

As it stands, Piranha 3-D skirts dangerously close to violating one of my Golden Rules of Film-Making: Never End Your Movie By Suggesting There Will Be A Sequel. However, you laugh so much at the lunacy of it all that you don't really mind. You know you're not suppose to take any of this seriously by the opening scene when Oscar-winner Richard Dreyfuss makes a cameo singing Show Me The Way to Go Home.

You can skip the 3-D, but a good time will be had. Piranha 3-D serves as evidence that fish may not be as healthy as we thought.