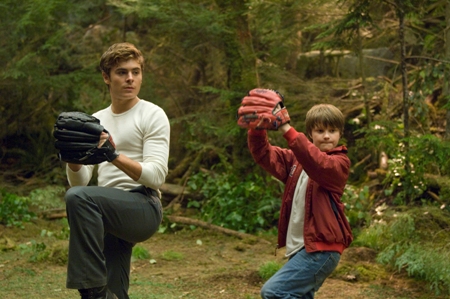 Zac Efron is pushing himself to be seen as an actual actor as opposed to merely a cute kid who sings and dances in Disney movies. Charlie St. Cloud (originally to have been called, like the Ben Sherwood novel it's based on, The Death & Life of Charlie St. Cloud) is a good try, but it didn't quite work as well as it could have through no fault of his.

Charlie (Efron) is a sailing phenom, all ready to take his sailing skills to Stanford on full scholarship. His mom (Kim Basinger), has to work double shifts to provide for him and his younger brother, Sam (Charlie Tehan), who is as passionate about baseball as Charlie is about sailing. One fateful night, Charlie & Sam get into a car accident. Sam is killed. Charlie, overcome with grief, cannot move on because Sam won't let him. Not his memory, but Sam himself, whose spirit holds Charlie to his promise of playing baseball in a secluded part of the forest at sunset.

Go five years later. Mrs. St. Cloud has moved away from Oregon, and Charlie is now the caretaker of the cemetery. While all the girls in town fantasize about him, he is too deep in his mourning to pay any attention, in spite of being encouraged by his co-worker/friend Alistair (Augustus Prew, who might be British but sounded Australian, which might have been the intent). Charlie, however, becomes fascinated with the sailing ship and exploits of Tess Carroll (Amanda Crews), who is in the final test runs to circumnavigate the world. He is surprised to find Tess suffering from head trauma at the cemetery.

Charlie takes her in, and in a few days they fall passionately in love. Then, he makes a shocking discovery: Tess, far from being with him (and not just in the Biblical sense), has actually been missing. Could it be that Tess is really dead, just like Sam? No, he knows she is not really dead but somewhere In Between life and death, so he forces Alastair and Tess' coach, Tink Weatherbee (Donal Logue) to search for her, forcing Charlie to miss his daily game of catch for the first time.

If she isn't dead, would that put Sam in the same not-quite-dead world even though he was buried? We are led to believe that Charlie can speak to the dead: an early scene at the cemetery either tricks us or leads us to think Charlie's insane or that he can make contact with the dead. However, when it comes to Tess, she might not be dead, but that would violate the rules we've been given. It can't have it both ways. Internal points of logic (and that love scene which thanks to Enrique Chediak's cinematography was self-consciously cinematic) are the least of its problems.

Would it be too much to ask if the girls in the film could ignore the beauty of Zac/Charlie? By having all the girls look at him with desire it does make the thing border on silly, and it takes away from the story, which is suppose to be about the grieving process. There is a subplot about the paramedic who saved Charlie's life which screenwriters Craig Pierce and Lewis Colick didn't take advantage of.

Ray Liotta's performance as Florio Ferrente (said paramedic) was wonderful, but unfortunately small. His brief story was actually more interesting than that of Charlie, and when you'd rather focus on a secondary character's story than that of the eponymous character, that spells major trouble. Basinger also was given virtually nothing to do, and while not the greatest actress (her Oscar-winning turn in L.A. Confidential notwithstanding), she was irrelevant to the plot. They might as well have been orphans for all the good she was.

Director Burr Steers couldn't steer good performances out of his leads. He seemed more interested in how the film looked than how the film worked: the scene with Charlie & Sam in the rain being a prime example of visuals over story. Tahan's Sam just came off as whiny and selfish, more concerned about tossing the ball than in helping Charlie move on. Crew's Tess had no purpose other than being the love interest, and she was rather flat.

As for Efron, I give him credit for trying to communicate Charlie's pain and anger about Sam, but too often he was just blankly staring out, looking beautiful. Efron the teen idol was in abundance. Efron the actor was nowhere to be seen. There was so much he could have done, but so often Charlie was forced to be passive that sometimes it was debatable which St. Cloud brother was the ghost. There wasn't any effort in Charlie to wonder or question why he was so attached to Sam postmortem, no sense that he was in a sense being held hostage.

I'll say this about Zac Efron as Charlie: he tries, he tries the best he can, but he can't lift the character above a puzzled and blank and uninteresting one.

Charlie St. Cloud could have been a strong meditation about grief and guilt, loss and hope. Instead, it goes for being merely pretty with no real core to it. However, to the legions of his fans, why bother with a plot or interesting characters when you've got this: 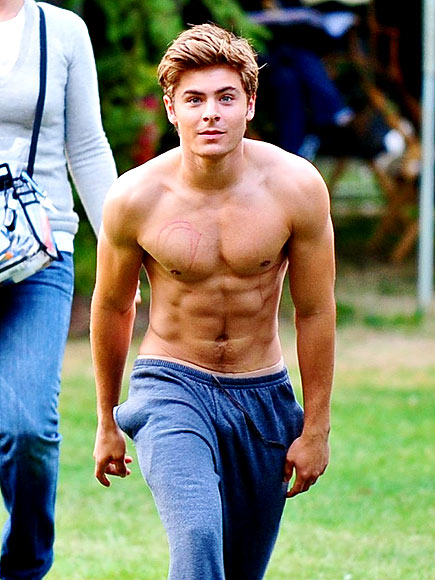 No, that doesn't make up for a weak and lifeless movie (no pun intended).