The Scarlet Empress: A Review 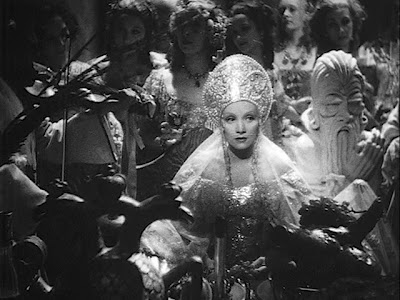 The Dietrich Of All The Russias...

I figure, merely from watching The Scarlet Empress, that director and auteur Josef von Sternberg would be horrified at the trend in modern filmmaking. If anything, he was solidly against "realism" in film. All this grittiness, all the efforts to make films look like they were 'reality' struck against the core of his view of film.

Von Sternberg argued that film shouldn't look 'real' because it simply isn't real. The Scarlet Empress is his declaration of war against "realism", a lavish tale of eroticism, decadence, opulence, and the power of imagery. Of course, when you have Marlene Dietrich, it is virtually a sin not to focus lavish attention on her.

The Scarlet Empress covers the early years of a minor German princess, Sophia Frederica (played as a child by Dietrich's real-life daughter Maria Riva, billed simply as Maria), who grows to a beautiful but innocent woman. She is betrothed to Grand Duke Peter (Sam Jaffe), heir to the throne of Russia. She is escorted by Count Alexei (John Lodge), who has fallen in love with her but who is rebuffed by Sophia (which is pronounced as So-FI-ah as opposed to So-FEE-ah, which did prove odd).

Sophia is taken to Court at St. Petersberg, and is horrified to discover her future husband is a half-wit who is physically repulsive, a bit mad, and already has a 'companion', Countess Elizabeth (Ruthelma Stevens). Even after the marriage, Peter's aunt, the Empress Elizabeth (Louise Dresser) is furious that Sophia, whom she has renamed 'Catherine', is not behaving like a proper Russian wife and worse, has not produced an heir. Soon, Catherine succumbs to the charms of Count Alexei (who is also 'entertaining' the aging Empress), as well as various soldiers in her retinue. When Peter at last becomes Czar, a power play goes on between them, but by this time Catherine has grown up and seizes power to become Catherine the Great, Czarina of All The Russias.

The Scarlet Empress failed financially when it was released, adding to the idea that Dietrich was 'box-office poison'. Having seen the film, it isn't surprising that it was a flop: it was in some ways a bit old-fashioned and in other ways far ahead of its time, shockingly so.

When it comes to the throwback aspects, the transitions between scenes for example were reminiscent of silent films. Von Sternberg didn't cut the action when we ended one scene and moved to another. Rather, he let process shots do that, where one scene would meld into the next one. He also had various title cards telling us what has happening, like when Sophia & Company rode out to Russia or when Peter finally ascends the throne and how he was a depraved ruler.

On the forward-looking side was the attitude toward sex. Von Sternberg couldn't show overtly lurid sex scenes but certain moments are remarkably suggestive. Take for example when Alexei gives a shocked Sophia a kiss. She rebuffs him. He tells her that he has kissed her and now he must "be punished", where he then hands her a whip and she looks at him with confusion.

This not-to-subtle hint at sadomasochism is pretty out there today, let alone for the 1934. We also get an almost overt suggestion that the long-hoped for heir is probably illegitimate, given that while we never see Catherine near Peter but we see her in a passionate embrace with a soldier who has caught her.

If anything, The Scarlet Empress is first and foremost a feast for the eyes, full of lavish costumes and sets beyond anything that borders on realistic. The uncredited Hans Dreier deserves massive credit for some of the most amazing sets ever filmed. It isn't until Sophia reaches Court where Dreier and Sternberg go all out into making it an amazingly lavish spectacle. Empress Elizabeth's throne is probably not historically accurate, but it simply is amazing: it looks like it was carved from one enormous tree, a massive, unreal thing with a large bird hovering over her.

Catherine and Peter's wedding is also visually arresting, keeping with the von Sternberg motif of filling the screen with people and candles and icons and veils, as if any empty space would be a crime. The chairs of the Empress' Council are also a bit outrageous: also looking as if they were carved from trees, they look like worried old men.  The subtlety in The Scarlet Empress might have been curious then, and it is a bit now, but it is wildly clever. 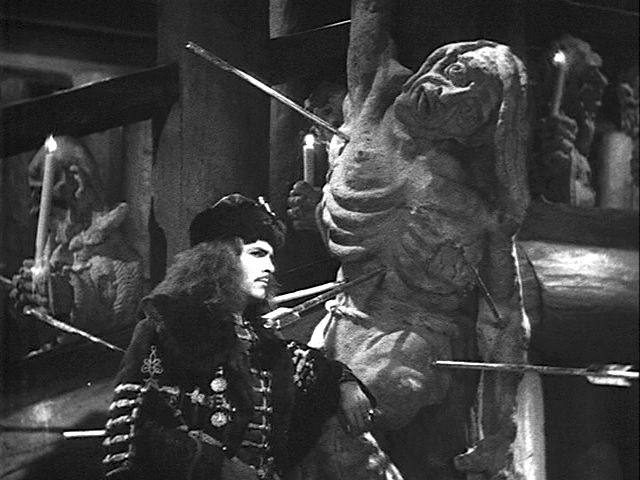 The wedding feast as well lends visually to the lavishness that was the Court of "the barbarians of all the Russias". Even the briefest scene gets the full spectacle treatment. When Peter visits the body of the Empress Elizabeth, the scene doesn't last for more than a minute, but no detail was spared, to the point where the actual body of the deceased monarch is virtually invisible.

Von Sternberg also created wonderful edits in the film. His montages are amazing. Take for example when we see Russian methods of torture: the images of barbarity and cruelty change like pages being turned, the last one being a bell being rung literally by a man which then transforms into a youthful Sophia gleefully swinging on a swing. A remarkable piece of editing, as is a later montage where Czar Peter III's proclamations bring the Russian people to their knees, a series of proclamations that bring terror, madness, and even sexual depravity.

It's done in a breathless pace that tells you what horror Peter's reign was and shocks with its visuals. The final, frenzied montage, when Catherine rides her horse, leading her army up the stairs of the palace to the conclusion of her successful coup as she laughs maniacally, is indicative of the wildness of now-Empress Catherine II, of Marlene Dietrich herself, and of The Scarlet Empress as a film.

This isn't to take from some of the acting performances. Louise Dresser's Empress Elizabeth is a terror, but she is also a bit of a comic character, like when she inadvertently uses a chicken leg as a scepter, or when she orders Catherine and Alexei out of her presence. "Now get out, the both of you. I have a war on my hands," she bellows.

Jaffe's Grand Duke Peter from the moment we see him on screen appears almost as if he wandered in from a Lon Chaney horror film, his grinning face and wild, crazed eyes signaling his insanity without saying anything. When he does speak, it's in angry whispers, as if his voice itself has the power to kill (which in a sense, it could via his orders).

At the center of The Scarlet Empress is Dietrich. Her screen presence is unmistakable, her magnificent face staring at us with passion and haughtiness. Given Sophia was German, she seems perfect for the role. In the beginning it is a bit unbelievable to see her as an innocent, but once she grows to the confident Catherine, Dietrich is in her element, a cool, slightly distant woman who knows how to play men.

Acting-wise, she isn't given much to do, an ironic fact considering The Scarlet Empress is about that scarlet woman, the intelligent and lustful Catherine II, Empress of All the Russias. However, one has to remember that the film isn't suppose to be a historically accurate biopic, but a visual spectacle to be thrilled by, a vehicle for Marlene Dietrich, and a rejection of reality.

Long May She Reign.