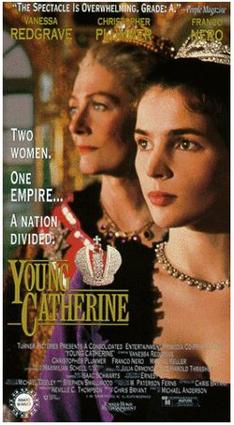 Perhaps apart from British monarchs Queens Elizabeth I and Victoria, few female monarchs have been the subject of as many cinematic and television treatments as Czarina Catherine II. The rise of an obscure German princess to Czarina of All The Russias is a fascinating true-life story, with elements of decadent imperial romps among the Enlightened despot's many political and military accomplishments. Young Catherine is another chronicle of our lusty ruler, and on the whole it is quite a good miniseries with strong performances by an international group of actors.

Young Princess Sophie (Julia Ormond) from the obscure German principality of Anhalt-Zerbst is brought to Russia as a prospective bride for Grand Duke Peter (Reece Dinsdale), heir to the Russian throne. Peter's mercurial aunt, Empress Elizabeth (Vanessa Redgrave) is charmed by Sophie, but not pleased that Sophie will not convert to the Russian Orthodox faith. Advised by both British Ambassador Sir Charles Williams (Christopher Plummer) and the Archimandrite Todorsky (John Shrapnel), the now-rechristened Catherine not only embraces Orthodoxy but Russia itself: its language, its culture and its people.

This displeases both Elizabeth's bitter rival the German Emperor Frederick the Great (Maximillian Schell) and Russian Count Voronstov (Franco Nero) for different reasons. Frederick wants the future Empress to be his puppet, while Vorontsov wants to be the power behind both Elizabeth and Peter's throne, seeing the Grand Duchess as both an annoyance and impediment to his own power. Despite being married for two years Peter is more interested in his toy and real soldiers than in the beautiful Grand Duchess. Complicating things is that to Elizabeth's shock she finds that Catherine is still a virgin. 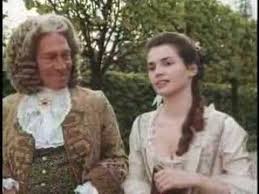 To solve that problem enters hunky Count Gregory Orlov (Mark Frankel), who has yearned for the Grand Duchess on first sight when escorting her to Russia way back when. The lovers conceive a child, fool everyone into thinking it is Peter's, and as soon as Grand Duke Paul is born, Catherine is all but forgotten. A group forms around her though, aware of both her keen intelligence and the dangers the Prussian-loving, bonkers Grand Duke Peter would present when he became Czar. Once this comes about, things move quickly in the power play between Czar and Czarina. Catherine soon wins to take the throne as Catherine II, Czarina of All the Russias.

Young Catherine follows one of the two most popular routes when dramatizing the life of our randy royal: showing her life up to when she succeeds in her coup d'etat. Other Catherine-related projects such as The Scarlet Empress and The Rise of Catherine the Great similarly start with her youth and end with her crowning. Young Catherine works well because of the performances, all of which are quite good.

Ormond is beautiful and strong as Catherine, managing to convey her naïveté with a growing shrewdness and daring. At times, Ormond's beauty makes her almost heavenly: a moment where Peter and his loutish friends crash the bridal bed frames her dark hair against her porcelain face is almost breathtaking. Behind her beauty though Ormond brings Catherine's growing spine of steel, her courage and willingness to play dangerous games successfully.

Of particular note is when Empress Elizabeth finds her niece-in-law has ordered the Imperial Guard to remain in St. Petersburg rather than to the Prussian front. Accused of treason, Catherine manages to win Elizabeth to her side by convincing the dying monarch that her motive was to protect Elizabeth and Paul from Peter, who is open about siding with his great hero Frederick. Ormond brings a mixture of trepidation and strength in this scene, revealing a strong actress. 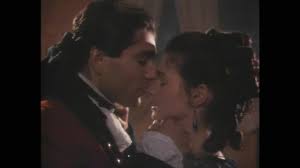 The supporting cast is equally adept. Redgrave is having a ball as Elizabeth, pious and imperious, one moment caring and motherly, the next tyrannical and frightening. Redgrave shifts easily from banishing Catherine's mother from Court for spying for Frederick to in the same scene tendering caring for the now-orphan Catherine. In her piety and rages Redgrave makes Elizabeth such an interesting figure one almost wishes there had been Old Elizabeth, prequel to Young Catherine.

Only in her death scene do we see Redgrave falter, the moment looking comically bad to where I did burst out laughing at her sudden expiration.

Nero and Schnell might have been a bit hammy as Vorontsov and Frederick respectively but they have some leeway as both were plotting and scheming to gain power. Plummer was not called upon much except be the wise mentor to Catherine, but he did well in his scenes with Ormond (curiously the only major player he worked with). A real standout was Dinsdale as future Czar Peter III. Dinsdale made him into a wicked child with the sadistic streak of a grown man. Before Peter is struck with smallpox he comes across as merely childlike and a bit of an idiot. However, as time goes by we see Peter as genuinely crazy, something that grows once we see his physical deterioration post-smallpox.

Peter is not just petulant but dangerous, a Russian monarch who openly hates Russia. In turns stupid, infantile and monstrous, Dinsdale gave the best performance outside Ormond.

Frankel didn't have a great deal to do in Young Catherine except be the figurative and literal stud. Yes, he too was beautiful, but it doesn't take away from a good performance as the not-obscure object of desire. Curiously though, Young Catherine did not indulge in eroticism, no sex scenes human or equine. It was surprisingly chaste, always suggesting but showing our lovers only once in bed together and even then almost exclusively covered. 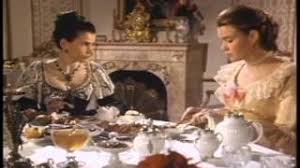 Young Catherine also has some strong and clever dialogue. As Catherine fights for her life during one of Vorontsov's machinations, Elizabeth orders Catherine's chief lady-in-waiting/BFF Princess Dashkova (Laurie Holden) to bring food and a stove to her bedchamber. "Surely you don't imagine..." Dashkova begins.

"I imagine nothing. I suspect everything," the shrewd Empress replies casually and calmly.

When Elizabeth orders Catherine's conversion, the Archimandrite suggests a softer touch is needed. "She might be led. She will never be driven," he tells his monarch. Catherine is surprised Sir Charles still speaks to her while Court ignores her as Peter struggles to live, but the wily tutor simply replies, "I'm a foreigner and an old man. I can afford the luxury of true friendship".

Young Catherine is sumptuous enough for a television miniseries, not opulent but respectable. The music also enhances some of the scenes, suggesting intrigue or romance when needed.

Young Catherine is not the definitive tale of this titan of Imperial Russia, but it's entertaining and with good acting that keeps your attention.