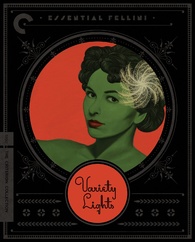 Variety Lights may not have the usual visual flourishes people associate with Federico Fellini, but little peeks of how he will move from Italian Neorealism to Felliniesque peer out from this charming albeit slightly sad story of the shadows that form in the glitz of showbiz.

An unsuccessful travelling vaudeville troupe is finishing up their run in a small Italian village. One audience member, however, is enthralled with the show. Liliana (Carla Del Poggio) sees them as a chance to become a star and forces herself onto the troupe. The troupe's leader Checco Dal Monte (Peppino De Fillipo), once a major star now all but forgotten, soon becomes besotted by the pretty young thing. Less besotted are the other troupe members, in particular Checco's loyal lover Melina Amour (Guiletta Masina).

Liliana does have some talent as a dancer, but what she really has is great beauty. She soon becomes the troupe's main draw with her mix of legs and face. A randy theater-loving lawyer invites the troupe to a lavish party, but Checco's jealousy causes him to break up a potential liaison and gets them all thrown out. Melina sees that Checco's obsession with Liliana has made him forget her and essentially the troupe.

Deciding to strike out on his own with his muse, Checco's efforts to cull old friends flops, with Liliana able to charm his old set to a career of her own onto bigger shows, albeit in small parts. This despite his own efforts to form a troupe of his own. Some time later, Liliana's bit part on a major stage, perhaps inadvertently, attracts more male eyes away from the aging female star. Checco finds himself back with his old troupe, where a chance encounter sees them literally depart in opposite directions. Despite his failure with Liliana, Checco spots another pretty young thing on the train, and his eyes soon light up, Melina again unaware. 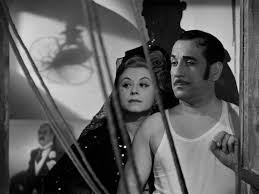 Variety Lights is surprisingly gentle with the characters, almost loving. Checco is not portrayed as lecherous and I'd say not even pathetic in his barely concealed desires for Liliana. Instead, he comes across as a man brought low by fading fame who sees in Liliana a second chance at youth and regeneration. De Filipo makes Checco a mix of the arrogant and the tragic, a wonderful performance of someone trying to live on whatever past glory he had, with a curious sense of optimism about his future despite it long passing him by.

Similarly, Del Poggio does not make Liliana into a vixen or coquette, or for that matter a scheming seductress using Checco to move forward. Far from it: she at times seems wide-eyed and if not innocent at least naïve about how the jolly nature of the show does not carry over into the backstage drama. A schemer would, for example, deliberately push herself to the center of attention and use her sex appeal to get her way. Liliana, conversely, is horrified when her costume shows her legs to the group of eager men. Even when it's made part of the show and the main attraction, she still shows a great deal of discomfort at the goings-on.

A nice surprise is Masina as Melina, the loyal lover. She is a fascinating character: one who simultaneously regrets and enjoys her life in entertainment. Unlike the other troupe members she has plans for her retirement (she's saved money for a deli she wants to open with Checco). She stays with Checco and the troupe out of love and loyalty to both. Melina is the balance between Checco's dreams of reviving past glories and Liliana's dreams of future glories.

Masina gives a beautiful performance in Variety Lights. She's surprisingly sexy as Melina, but we also see her genuine heartbreak when she observes Checco ignoring her pleas to help her lift the troupe's elderly manager, her lover lost in concentration with the younger, prettier Liliana.

Variety Lights is deftly directed by Fellini and Alberto Lattuada. Granted, it's hard to know exactly what the balance was in the directing, but I think we see elements of Fellini in certain scenes. There's a brief running gag of the troupe members being caught off-guard by a water drip just before they take to the stage, and a dance club scene where club-goers have to dance like people riding animals (the women on top of the men). There's also a moment when Checco walks away from Liliana's apartment to the sound of applause, an ironic comment on his failures.

Variety Lights is a love letter to those who travel from town to town to entertain people. Behind the jolliness of Luci del Varietà, the closing troupe number, there is actually quite a lot of sadness behind those glittering costumes and stage magic. Variety Lights is still within Italian neorealism in how it keeps things grounded and even a touch sad, but it also has bits of the more elaborate and surrealist work that Federico Fellini would eventually master.