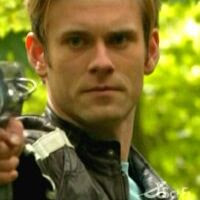 Assassin, the fourth Flash Gordon episode, was one I found entertaining even if at times it did turn on clichés.

Flash Gordon (Eric Johnson) has long wished for his father, Dr. Lawrence Gordon, would return after his disappearance thirteen years ago. It now appears that his wish has been granted, for Dr. Gordon (Bruce Dawson) has been spotted on camera. Flash and Dr. Gordon's assistant Zarkov (Jody Racicot) are thrilled, but Flash's female friend Dale Arden (Gina Holden) and otherworldly warrior Baylin (Karen Cliche) are more trepidatious.

Her fears are warranted, as Dr. Gordon appears to be killing his colleagues from his past work. There is evil at work, and now it's a race to find the being that appears to be Dr. Gordon, along with his potential targets, one of whom is Zarkov himself.

Doppelgangers abound as more lives are at risk, all part of Ming's plot to control time-rifts, which these humans have stumbled on. It is a fight to both save themselves and exonerate Dr. Gordon from the suggestion that he's an assassin. 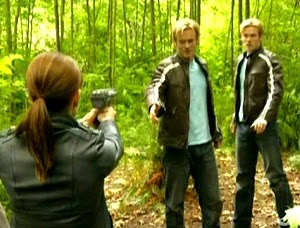 What surprised me about Assassin is Cliche as Baylin, who is turning into the best thing in the series. She manages a balance between comedy and action. Her interplay with Racicot's bumbling Zarkov shows a light side, but she is also able to handle the fight scenes with equal ability. It is also a chance for Johnson to show a more dramatic side.

This comes both in showing Flash's hopes for that longed-for reunion with his long-lost father, as well as for him to play two versions of "Flash": the real one and the doppelganger.

This, however, is where we get a bit of a standard situation: which one is the real Flash, and the hard decision of which one to destroy. It isn't much of a drama when you know the doppelganger is going to get it. That, coupled with Baylin's ability to destroy a weapon by essentially belching it out of existence is also a bit off-putting, cutting away from the drama and seriousness of the episode.

However, there were other elements that surprised me about Assassin that I thought well of. There's the idea of the "Mind Tap", a literal brain drain to kill off Dr. Gordon's fellow scientists. Not as graphic as I thought it would be (though to be fair it has been a while since I saw the episode), at least I thought it worked well enough.

Assassin has the plus of letting the actors play more drama with a bit of comedy thrown in, one not overwhelming the other apart from the belch of death.