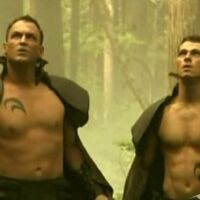 Ascension is a pun, but perhaps that is giving the fifth Flash Gordon episode far too much credit. Filled with hunky men it also has a bit of a jumbled almost illogical story.

As Flash Gordon (Eric Johnson) and his female friend Dale Arden (Gina Holden) continue struggling to have warrior princess Baylin (Karen Cliche) try to fit in on Earth, in another part of town a young skateboarder and his friends are out tagging. The young man, T.J. (Samuel Patrick Chu) has an odd obsession with spraying in the shape of a bird, specifically a hawk. He can't figure out why until he is literally abducted by winged men.

These winged men, who entered Earth through another time rift that Flash, Baylin and their associate Zarkov (Jody Racicot) traced, are known as Dactyls but soon earn the nickname "Hawkmen". However, why would their leader come to Earth, and specifically care about T.J.? The mystery is uncovered when Flash and Baylin travel through the rift back to Mongo, but it's still astonishing: T.J. is the son of the Dactyls' leader Vultan (Ty Olsson)!

Now as the Dactyls are grooming a most reluctant T.J. to take his place among them, they along with Flash and Baylin, must avoid the wrath of Ming's minions and his alluring daughter, Princess Aura (Anna Van Hooft). Will T.J. really fly? Will Flash and Baylin return in time for Mrs. Gordon's dinner? And who is "Steven"? 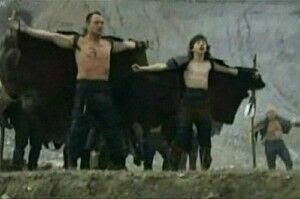 Ascension is surprisingly more interested in showcasing the various muscular torsos of the Dactyls, Flash included. Whether this was intentional or not I cannot say, but a lot of Ascension seems a bit odd.

I get for example that as this is a more family-geared show, T.J.'s friend can't be particularly vulgar. However, "Freaking birdmen stole freaking T.J." just sounds bizarre no matter how you cut it. It's as if they wanted it both ways: having T.J.'s friend Joe Wylee (Giles Panton) utter vaguely course language while not having him actually curse. I can't help shake the idea that Joe could have phrased it a bit differently.

Moreover, Ascension makes no case as to why T.J.'s mother was his adoptive one (T.J. being spirited away in the same time rift that took Flash's father). Why exactly he had an obsession with hawks is not established either. Yes, he is a Dactyl, but how he sensed this no one knows. It all seems a little too pat, too convenient.

I think Ascension is meant to be more about fathers and sons, which is a good thing. There's Vultan's efforts to both bond with T.J. and make him as himself in what I like to call T.J.'s "bird mitzvah". It should be a counter to Flash's continuing search for his own father. 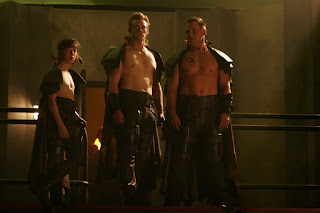 The episode does have some rather curious bits of dialogue, and bless the cast for saying them with as much believability as possible. "He believes in you. I believe in you.  Now you have to believe in you," Flash tells T.J. when he has to literally fly for his life. Somehow, that just sounds rather cornball.

I can cut some slack to the actors playing the Dactyls as a) most were there for their physique and b) they I figure were meant to sound grandiose to pompous. Chu did quite well though as T.J., thrown into a simply outlandish situation and reacting as well as anyone could. It makes his final scene back home quite moving.

Cliche continues to be the standout as Baylin, particularly whenever faced with a comic situation with Jill Teed's Mrs. Laura Gordon. From being unable to drink water from a bottle as others would to telling Mrs. Gordon that "we are not mating", Cliche does this with such a straight face that one would like to see a spin-off about Baylin struggling through this awful human world. As she knows him as "Flash", her question of "Who is Steven?" is hilarious in its delivery.

Ascension has some odd moments, particularly when dealing with Mongo royal intrigue, but as I think on it it is not horrible.