Sylvia Scarlett has the dubious reputation of being one of the greatest flops in Katharine Hepburn's career, a film so disastrous it cemented her reputation as "box office poison". That Hepburn appeared through most of the film in drag did not help matters. It's curious that the teaming of Hepburn with Cary Grant continued after the critical and commercial disaster of Sylvia Scarlett, though their succeeding collaborations yielded better results. However, with the passing of time does Sylvia Scarlett really deserve its negative reputation? Is it worthy of being a cult film?

After his French wife dies, gambling addict Henry Scarlett (Edmund Gwenn) opts to flee back to his native Britain to avoid arrest for stealing his employer's money. His daughter Sylvia (Hepburn) insists on going with him, dressing as a boy to avoid the police. Now as "Sylvester", they meet with scam artist Jimmy Monkley (Grant), who despite causing them trouble by snitching on Henry's smuggling efforts takes them on as apprentice thieves.

Henry and Sylvester prove inept at Jimmy's monkey business, so Jimmy decides to hit what he thinks is an easy mark: Maudie (Dennie Moore), a maid with theatrical aspirations. Jimmy's efforts to steal jewels from Maudie's employers fails thanks to Sylvester's decent heart, who can't bear her losing her job and possible arrest. Maudie loses her job anyway when the group decides to create a traveling entertainment troupe.

Now as "The Pink Pierrots", they travel the countryside until an encounter with artist Michael Fane (Brian Aherne). Soon, he and his Russian lady friend Lily (Natalie Paley) get involved with their lives. Maskings and unmaskings ensue, with death hitting around them until the now-out of drag Sylvia and Michael join forces, perhaps in a happy ending. 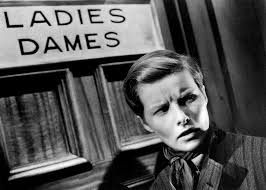 There has been much talk about the sexual politics of Sylvia Scarlett as a thinly-veiled gay story. While its director George Cukor was openly gay I think the suggestion of gay over/undertones in Sylvia Scarlett is giving it far too much credit. Sylvia Scarlett was first and foremost meant as a comedy, but early on the comedy is far too broad and forced.

A particularly bad point is when the trio first tries to con the public into thinking Sylvester was a stranded French boy, playing on their sympathy for money. Hepburn, Gwenn and Grant were so over-the-top in their exaggerated manner that it played as if none of them actually believed what was going on. Given their performances, it's a wonder the park audience couldn't see through them right away.

Sylvia Scarlett has some simply dreadful performances. Hepburn was awfully dramatic early on, acting with a Capital A. Gwenn equally embarrassed himself, going into the hysterical manner that while it did end up funny it was the wrong kind of funny. Perhaps one can cut him some slack given that Henry was an inconsistent character. In the first part of the film, he's meant to be a quivering idiot, but in the second part he's this insanely jealous spouse (he and Maudie inexplicably got married).

To be fair, it's not technically inexplicable: I figure the Production Code would not allow an unmarried woman to travel with two men, but it still looks bizarre and irrational. Moreover, Henry's fits of jealous rage make it hard to believe Sylvia Scarlett is a comedy. 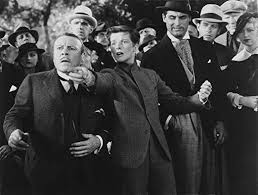 While Grant was better, he too was poorly directed, which is surprising given it's George Cukor. You could see the menace Grant would bring to future films such as in Notorious, but again he was asked to be exaggerated in his manner. Moreover, Jimmy Monkley was a pretty reprehensible figure right from the get-go, so there's no way audiences would care for/about him. Aherne was surprisingly fine when Sylvester showed up as Sylvia, almost amused that she was a pretty girl rather than a pretty boy.

Michael's line of "I know what it is that gives me a queer feeling when I look at you," can be read in so many ways, but I leave it to viewers to interpret that any way they wish.

Many if not all the situations in Sylvia Scarlett did not lend themselves to comedy. You had cruel conmen, murderously jealous husbands, near-suicidal women. Perhaps, on second thought, you could make a comedy with these elements, but Sylvia Scarlett couldn't do it. The actors attempted to either force the comedy or make the characters idiots.

Despite Maudie attempting to seduce her "stepson", Sylvester still defends her when she's accused of flirting or more with other men? Why does Jimmy run off with a potentially unconscious, potentially dead Lily? How did the Pink Pierrots start? Why did they start doing traveling shows when con jobs would probably be better? Why did Henry and Sylvester stay on with Jimmy? Why did Sylvia insist on keeping her drag act going? Why opt to reveal herself to Michael?

I think Jimmy uncovered her secret while at the beach, but why did he go along with this gender-bending shtick?

So much of Sylvia Scarlett seems to leap from one idea to another that it soon starts becoming a jumble.

I'll allow a little leeway in that at times I was nodding off, but it still doesn't seem to make much sense.

Sylvia Scarlett is now held in slightly better regard thanks to its sexual fluidity. I personally don't think that's what they had in mind but if people want to read that into things, more power to them. I just found that Sylvia Scarlett had a jumbled story and some pretty lousy performances from people who should have known better.