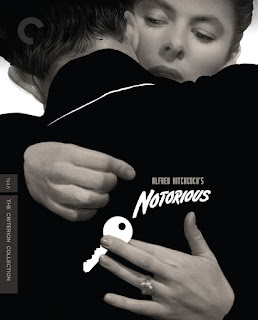 As I watched Notorious, I kept thinking, "This isn't a spy film. It's really a love story in the guise of a spy film". A spy film would be something like The Man Who Came in From the Cold or the Bourne films: Identity, Supremacy, Ultimatum. No, this ISN'T a thriller--although there are thrilling moments. Essentially, Notorious is a romance, a love story with a little bit of espionage in it.


Alicia Huberman (Ingrid Bergman) is notorious due to her father, who has been convicted of treason for having spied for Nazi Germany, and for being a party girl, drinking and carousing with abandon. Because of her father's past and her blemished reputation, she is therefore the right person to infiltrate a German cabal in Brazil to find out what they're up to.
T.R. Devlin (Cary Grant) is the American agent who recruits her to integrate herself into the circle of her father's friend Alexander Sebastian (Claude Rains). Sebastian, who is in love with her, easily allows himself to be charmed by Alicia, and she gains entry into his world, one where exiled Nazis are planning to smuggle uranium. Eventually, Sebastian and his mother (Madame Konstantin) figure out what is going on and plan to kill Alicia.

With Notorious, Alfred Hitchcock and writer Ben Hecht create a superb romance that can easily pass for a suspense film. The film has a love triangle between Alicia, Devlin, and Sebastian, and we are not allowed easy outs to who is the good guy and who is the bad guy. Sebastian is at the very least a Nazi sympathizer/collaborator, but he also is genuinely in love with Alicia. Conversely, Devlin is constantly cruel to her: he has no qualms about insinuating she's a slut to her face. However, he also is driven by his love for her in spite of his desire NOT to care or love her. As for Alicia, it's clear she's in love with Devlin and is willing to be made a virtual prostitute because of her love for him. This is the true suspense in Notorious, between the desires of the three main characters and the goals each has.

Take for example the scene where Alicia tells Devlin that she has made Sebastian one of her "playmates". You see Devlin's reaction is a quick flash of anger, but then he strikes back verbally at her, suggesting that it isn't a surprise given her past. You then see Alicia's reaction: one of hurt. This is brilliant acting: Grant and Bergman are able to communicate great emotional torment with only their faces. While saying nothing, their reactions express everything that is within them.

Both Grant and Bergman capture the conflict within their characters so brilliantly. Grant's Devlin (a brilliant name) plays on the Cary Grant persona of romantic elegance by giving Devlin a hint of menace. His performance is one where he is outwardly aloof and remote from Alicia while inside he is filled with passion toward her. He may insinuate that she's easy, but his reaction to anyone else insinuating the same thing gives him away.

Bergman is also amazing as the torn and conflicted Alicia. She is desperate for Devlin to love her, to see her as a good woman worthy of love. She wants to do the right thing and is willing to make the sacrifice of giving herself to a man she does not love in order to try to please the man she does love. Throughout the film, Alicia wants to prove she is worthy of love, especially of Devlin. The conflict within all of them comes to a head at a party Sebastian and Alicia give after coming back from their honeymoon. She and Devlin look through the wine cellar for clues about what Sebastian and his cohorts are up to. When Sebastian himself comes, Devlin embraces her passionately. Here, it is done to throw Sebastian off the track about what is going on but it also serves to throw Alicia and even Devlin off as well, where the emotions they are trying to suppress are in danger of erupting. Claude Rains, who earned an Oscar nomination for the film, also gives a masterful performance of a man who has been duped by love. There is a scene in his mother's bedroom when he realizes that Alicia is an American spy. Hitchcock films him in front of a mirror, thereby leading us to the suggestion that Sebastian is being torn in two between his sincere love for Alicia and his anger at this betrayal, the betrayal that she didn't love him AND is taking information to the enemy. Even the smaller roles like that of Madame Konstanin are first-rate. She is a manipulative villain and appears to be a major player in the group while always maintaining herself slightly above things. In the climatic scene where Alicia realizes her life is in danger, we see her look at both Sebastian's mother and Sebastian. Hitchcock shows us, again, with the dialogue adding little to nothing to what we know is going on: both Mama Sebastian's villainy and Sebastian's passiveness.

You have three amazing actors in Bergman and Grant in some of their best performances (two beautiful people who could act) and Rains (though not beautiful) is also top-notch. You have Alfred Hitchcock, one of the great directors of all time. The combination creates of the all time masterpieces, proving that love is one of the most suspenseful emotions known to man.