There is a famous line in JFK, where Jim Garrison (Kevin Costner) tells his staff in his N'awlins drawl, "We're through the looking-glass people, where black is white and white is black". Nothing captures JFK so accurately, a film that is technically first-rate but so historically irresponsible it may end up achieving the opposite of what it claims to want to do. It paints crazy people as sane, sane people as useful idiots, and history as being in flux. It may claim to want to solve the mystery around the assassination of President John F. Kennedy, but what it ultimately does is make it so confusing that the truth may never now be fully known or accepted.

We begin at the beginning, where in a montage narrated by Martin Sheen (who more than other actors is identified as J.F.K. via his starring role in the mini-series Kennedy) and we end with the assassination itself. Now we go to Jim Garrison (Kevin Costner), the New Orleans District Attorney. Three years on, D.A. Garrison can't let the assassination go. He begins to suspect that Lee Harvey Oswald is NOT the assassin, but instead 'just a patsy': a stooge, a fall guy, one left out to dry.

He begins his own investigation into the assassination and makes a shocking discovery: there was not only a conspiracy, but a MASSIVE conspiracy where there were TWO assassins (neither being Oswald himself) and that involved (as far as I can make out) Cuban exiles, the CIA, the FBI, perhaps the Mafia, and possibly Fidel Castro, the federal government and then-Vice President Lyndon Johnson.

The motive for what is called a "coup d'etat" is quite simple: to stop President Kennedy from being President. The military-industrial complex must be fed, and with Kennedy about to stop that gravy train, these disparate groups joined forces for their own reasons (I imagine the logic of Cuban exiles AND Castro working together to save Vietnam from the Americans escapes only me) to stop the President from A.) achieving peace with the Soviets, B.) ending the space race, C.) ending the Cold War, and D.) pulling out of Vietnam.

All this he would have achieved in his second term (which we ALL should know was a given, given his landslide the first go-round). Only Garrison has the intelligence and the courage to unmask this evil, and the only one who dares speak the truth to a world that refuses to believe. He manages to bring New Orleans businessman Clay Shaw (Tommy Lee Jones) up on charges of conspiracy, but as in all Quixotic battles, the conspiracy holds.

JFK is excellently put together. Many times it is impossible or extremely difficult to distinguish what footage was from 1963 and what footage is from 1991. The shifts from color to black-and-white photography give the film a documentary-like style. The editing by Joe Hutshin and Pietro Scalia is so seamless one almost has to be an expert to know what is what. John Williams' score is also brilliant: it gives the film this menace, this sense of danger and conspiracy that reflects well on both Williams' talent and the overall sense of conspiracy in the film.

The performances are also first-rate. As Garrison, Kevin Costner gives a masterful performance. His Garrison is an extremely good and noble man, the ubiquitous pipe giving him an air of respectability, a professorial, almost Holmesian manner to his investigation. The summation at Shaw's trial is a brilliant piece of acting. It takes an extraordinary talent to carry off such a long monologue scene, and Costner creates a mesmerizing piece of acting where he holds you in his hands. Gary Oldman (who shockingly has YET to receive a single Oscar nomination) makes you forget he's British and makes Oswald not just a loner but a shadow, a mystery man who is just out of reach.

There are also solid performances from such varied performers as Jack Lemmon, Sissy Spacek, Ed Asner, Donald Sutherland, and most surprising to me, John Candy as attorney Dean Andrews with an extremely convincing New Orleans accent. I was surprised in Candy's dramatic turn, at how well it was done, and how good he was in a very small role.

Having said all that, praising JFK where it needs to be praised, the films fails to be reality-based. There are times when director Oliver Stone lights Costner in such a way as to almost give Garrison a quasi-divine look to him. The same thing that made JFK effective in its camera work is also what makes it dangerously deceitful. For someone who knows little to nothing about the Kennedy assassination, the information being presented is shown as the unvarnished truth when in reality it is highly selective.

Take that same trial scene. Never do we get a counter-argument, one that provides contradictory evidence to rebut Garrison's claims. That would not serve its purposes, which ultimately is not to entertain or even draw light on the Kennedy case. The entire raison d'ete of JFK is to convince people that there was this conspiracy so large that by the end of the film one is convinced that one's own parents were somehow involved. Early on in the film, Ed Asner's Guy Bannister (ex FBI and John Bircher) cheers on the assassination, toasting the "end of Camelot". This would have been nonsense to say in 1963 because no one referred to the Kennedy Administration as "Camelot". This started shortly AFTER the assassination, and even the most cursory student of history would know this. The fact that so many Americans are shockingly ignorant of their own past is an embarrassment unto itself, but it also allows such free-wheeling with history to pass unquestioned by the mass public.

By JFK accounts, Lee Harvey Oswald was a lousy shot who had no reason to learn Russian. By historic accounts, Lee Harvey Oswald was a marksman who taught himself basic Russian in order to live in the U.S.S.R. Which is to be believed? I'm not here to argue over the historical accuracy of JFK. As in all films based on historic events/people, certain liberties will be taken for dramatic effect. That's par for the course.

What separates JFK from other films is that JFK presents itself as being closer to the Truth than actual history would allow. It takes great pains to portray fiction AS fact and fact AS fiction. The famous "magic bullet" theory is presented in a way as to have the audience draw the conclusion the film-makers (director/co-writer Stone with his co-writer Zachary Sklar) want you to draw. That would make JFK not merely manipulative. It would make it propaganda.

Some parts are so obviously ridiculous one wonders how reasonably intelligent people could believe such things. Take Sutherland's character. Garrison met him on the steps of the Lincoln Memorial and this 'contact' would recognize Garrison by an umbrella. I howled with laughter when he introduced himself to Garrison as "X". Could we get a more idiotic code name? Unless he was a black man with red hair and a fiery speaking style no person should ever refer to himself as "X" or his superior as "General Y". The last time X and Y were linked in a conspiracy it involved the French attempting a shakedown of the U.S. government in the first Adams Administration. If Garrison really met a whistle blower who called himself "X", then Garrison was bordering on insane. 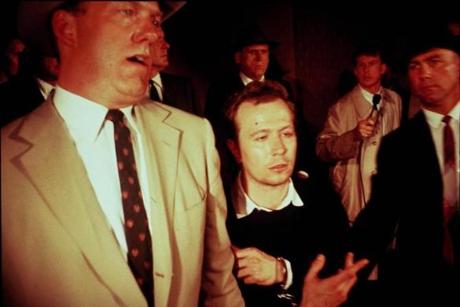 It also is extremely insane to believe that this cabal would go through all this trouble to be rid themselves of President Kennedy when he was one year away from re-election. If they really thought the President was so dangerous to the cause of world peace (he was for it, they were against it), they could have worked their wonders to have Barry Goldwater elected (someone much more in line with their 'kill them all' policy). It would have taken months if not years to have pulled everyone out of Vietnam and have detente with the Soviets. Frankly, contrary to how Stone et. al. view President Kennedy, in reality he was a staunch anti-Communist and not a Jimmy Carter with more sex appeal. If they wanted to get rid of him sooner, all they had to do was leak information about the President's Addison's Disease or his sexual indiscretions, and the resulting scandal would have either cost him re-election or forced him to resign and they would have gotten Johnson in office. In short, all these machinations weren't necessary and it's so bizarre to think such a disparate group of people would plan such an elaborate scheme to remove a politician from office when much simpler and cheaper methods were available.

I also found the constant showing of the Zapruder film to be cruel and gratuitous. I find it perverse to be shown in slow motion a man having his brains blown out over and over and over and once more. The whole thing borders on sadistic. Restraint should have been called for, but when you're convinced that you are speaking Truth to Power, there's no holding you.

Ultimately, JFK is a landmark film, but for all the wrong reasons. It is the beginning of Oliver Stone's conspiratorial bent, where he presents his version of history as almost Gospel. Nixon, W., even Wall Street: somehow Stone has become the unofficial chronicler of the times, and his reality has replaced the history section as THE TRUTH ITSELF in the minds of Americans. People now get their history and facts from film and television. JFK made Michael Moore and Morgan Spurlock more acceptable as documentarians when in reality they have made opinions and selective facts pass as 'nothing but the truth'.

The film also has made the idea of massive conspiracies almost normal. All those "9/11 Truthers" and "Birthers" (those convinced the attacks on September 11th were done with the knowledge of or by the U.S. government itself or that President Barack Obama was not born in the United States and thus is an illegitimate President respectively) are the children of the world of JFK. The tragedy of the assassination is compounded by the lunacy of the film itself.

JFK is a disservice. As a film, it's brilliantly put together. As reality, it's a fraud. Does the film work as fiction? Yes. As fact? No. However, it is being presented AS fact. In truth, JFK is as truthful as Triumph of the Will. Nothing will ever dissuade the true believers like Garrison or Stone. It's true that black is white and white is black. Lack of evidence is presented AS evidence of a conspiracy, contradictory evidence is presented as evidence of a conspiracy. It's an ironic turn in history that Americans believe there was a major conspiracy to assassinate Kennedy and none to assassinate Lincoln when in reality there is more solid proof for a conspiracy against Lincoln than there is against Kennedy. Curious no one ever thinks there was a conspiracy in the assassinations of Presidents Garfield or McKinley.

It presents truth as fiction and fiction as truth. In that lies the real danger, more dangerous than any conspiracy: the idea that JFK is reality.