Remember Me: A Review 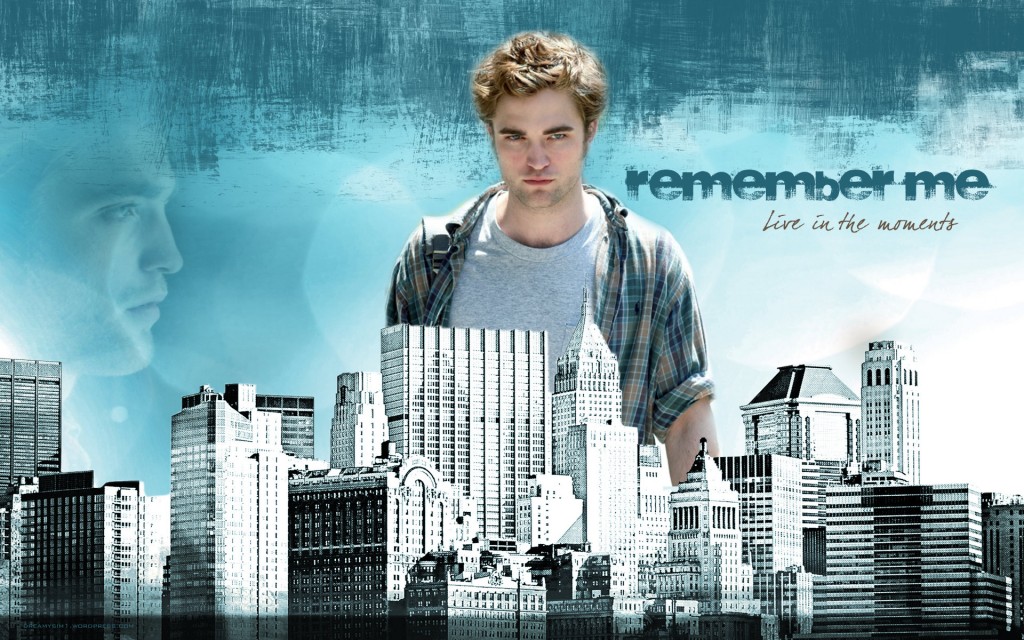 Tyler Hawkins (Pattinson) is the disaffected son of successful attorney and Brooklyn native Charles (Pierce Brosnan, and that is not a typo--he is suppose to be from Brooklyn). With a cigarette almost permanently dangling from his mouth, he wanders through life, living in a dingy apartment with his goofy best friend Aidan (Tate Ellington), working in a bookstore and attending college for no particular reason. He is still dealing with the suicide of his brother Michael and about the only person he has any love and affection for is his younger sister Caroline (Ruby Jerins). One night he has a run-in with Sgt. Neil Craig (Chris Cooper), but shortly after Aidan makes a discovery: the sergeant has a daughter, Ally (Emilie De Ravin). They cook up the scheme of Tyler wooing her and then once she's hooked to dump her. As it happens, they truly fall in love.

Ally has her own traumas. Ten years earlier, in 1991, she saw her mother murdered on a subway station when she was robbed. Here are two wounded souls, finding comfort in each other, loving each other. Eventually, Sergeant Craig discovers who his daughter's new boyfriend is, and so does Ally. They separate, and while there is a reconciliation of sorts, a greater tragedy will break them apart forever. There are quite a few problems with Remember Me. First is the overall screenplay by Will Fetters. The revenge aspect of toying with a young girl's emotions who has nothing to do with anything in order to get back at her father is sleazy and really bizarre. Such things make Tyler unsympathetic, even slightly cruel, and what we need is to identify with him, not think he's cruel. It was an easy way to get these characters together, but highly unrealistic. Also, the relationship between Ally and Tyler develops way too fast: in a short time they fall into bed, and while it's possible that no woman would resist the beauty that is EDWARD CULLEN (I mean Robert Pattinson), one wonders if it would have been better to have let the story develop a little more before they have sex.

The biggest problem is the actual acting. Brosnan for example did not do a bad Brooklyn accent but is was not convincing. You could tell he was forcing himself to not speak with his native British accent. We only had a vague idea as to why Tyler had such resentment toward his birth father. Cooper (a good actor) and De Ravin were not convincing when they fought over her new relationship, nor when De Ravin and Pattinson fought when she discovered the truth. I'm going to have to go with the common factor in both fights and say that De Ravin was a bit lost (pun intended) trying to rally a sense of hurt or anger in both instances. Ellington's Aidan added nothing to the story except a certain amount of silliness.

At the center of Remember Me is: can Pattinson act? Judging from this film, he hasn't gotten there yet. I give him credit for a very successful American accent, but through almost the entire film he still has the speech tones of EDWARD CULLEN: a quiet, soft tone that wasn't quite a whisper but didn't sound like a normal speaking tone. He could easily have whispered "Bella" as he could have "Ally". That is what's wrong with Pattinson as an actor. Either he's holding back or he does have a hard time expressing much emotional ranger.

Director Allen Coulter may not be the person who could break Pattinson of his EDWARD CULLEN mode, looking all forlorn, pursing his lips on many occasions. I do note there was a lot of Pattinson Pouting through Remember Me, which only adds to the notion that he was merely rehearsing for Eclipse (excuse me, The Twilight SAGA: Eclipse). Pattinson in this film did not try to dispel that he was just a pretty face trying to channel his version of James Dean--getting the persona of Dean without the actual acting that Dean brought to his performances.

Only once did Pattinson go for real emotion. When he comfronts his father after Charles skips Caroline's art show you could see Pattinson really making the effort to act. He tried so hard and came so achingly close to actually acting. He was pushing himself as he's never pushed himself before, and I applaud his efforts in this one scene. However, once that's over he goes back to this soft tone until he terrorizes a little girl who has been bullying his sister.

THE NEXT PARAGRAPH CONTAINS A SPOILER. PLEASE SKIP TO FINAL PARAGRAPH IF YOU DON'T WANT TO KNOW.

The final act is very dicey. Using the attacks of September 11th as a plot point (or worse, as a resolution to the story) is very dangerous. It runs the risk of trivializing the horror of that day, and a little lazy. You don't have a conclusion to how the story will end, and here's a quick and easy way to end the story without having to have the characters themselves resolve the situation themselves.

All that could have been endured if the script hadn't been pointing us in that direction. The movie starts with us looking at the World Trade Center in the background, and during a class there was a discussion about terrorist attacks being on the rise. We were getting signals that September 11th was coming. That was a mistake because we were basically given no real resolution to Remember Me. Rather, we were made to endure a horrifying act of mass murder once again.


Overall, I still think that Robert Pattinson may yet be an actor, though projects like Remember Me (on which he was a producer) will not make us forget the vampire. It would get an A for efforts, but...