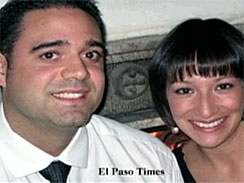 I have a few memories of Arthur Redelfs. We went to elementary school together, and we were friends for a while until it ended over something ridiculously petty. After that, we couldn't stand each other, or at least I couldn't stand him. All these years later if I ever thought of Arthur Redelfs I had a faint dislike for all the memories he brought. Until now.

I learned that he along with his wife and unborne son were murdered on the streets of Juarez. There is no motive, there is no reason. My heart breaks to think on the terror they must have endured, and fortunately their daughter Rebecca was not hurt, though she at less than a year old is deprived of both her parents and younger brother.

Now, I am filled with the greatest of regrets. It is an unfortunate aspect of my nature to hold on to grudges, to not let go. Now, far too late, I realize that things that happened when I was a child should be left there. I can't find it to explain the reasons for these barbaric crimes, not just against them, but against every one who has been beheaded, dismembered, mulitated, tortured, or just plain shot.

They were murdered because there are people who've been sold a bill of goods. They think that having a lot of money by any means necessary justifies taking lives. Some would argue that they are soul-less. I disagree. They have souls, but they have been corrupted almost beyond redemption. It is so true: the LOVE of money is the root of all evil.

Even today, there are people who I suspect hate me. I cannot control how others feel about me, but I can control how I feel about them. Do I hate them? There are still resentments, but now I see that I waste my time thinking on such things. I don't think I quite answered the question, so here goes: I dislike them, but the black hatred I felt is dissapating just a touch.

In any case, for whatever it's worth, I'm sorry, Arthur. I hope you forgot or at least forgave whatever petty slight I put you through. I will say this about him: his last act was to try to outrun the monsters who targeted him and his family. His Final Hour Was Also His Finest.

I don't like using this site to bring non-movie related views on things, but this is far too serious a matter to ignore. His death has made me more appreciative of the friends I have, from the longest friendship (Steven A., whom I call Stevener) to that of my beloved brother Gabe (whom I call Gabester--guess am not one for big nicknames). I've been blessed with good people all around me, who care about me in spite of my flaws.

So to all those who still harbour resentment (and I know who you are) I hope that in the end, you will see it in your hearts to forgive. We don't have to be friends again. I just hope you don't cheer at my death. Arthur, all that once was past is now at an end. Rest In Peace.
Posted by Rick at 2:55 PM

Email ThisBlogThis!Share to TwitterShare to FacebookShare to Pinterest
Labels: In Memoriam, Ruminations