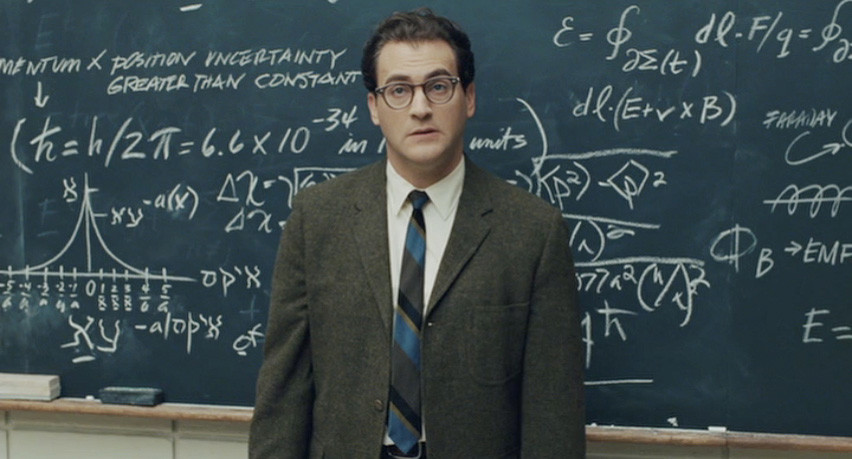 You'll get no argument from me that A Serious Man is the Coen Brothers' most personal film. Of all their work (of which I've seen only three) I think this is the first time they've ever suggested they are Jewish. Those that belong to the Coen Coven (whom I lovingly refer to as Coen-Heads) who believe ANYTHING they do is the Citizen Kane of whatever they do.

I, however, find much to kvetch about.

We begin with a prologue set in a Russian schtel, where a man and his wife argue over whether the rabbi who helped the man is really a dybbuk (an undead) or not. Even after she stabs the rabbi we don't get a resolution as to whether or not he was a walking corpse or not, since he goes goes out into the snowstorm again. This is the perfect analogy for A Serious Man, a film that has nothing to say and says it in the same quite, dull, slow manner that is the Coen's signature style. Just as there is no real point to this prologue (I have to guess that perhaps this incident brought about a curse to the descendants we will see later) there is no real point to the film as a whole (more on that later).

Flash forward some fifty-odd years later. You have Professor Larry Gopkin (Michael Stuhlbarg), the biggest nebbish in film history. He is a math professor up for tenure who is hit with a series of situations a la Job.

His son Danny (Aaron Wolff) is getting ready for his bar mitzvah but has no real interest in it, only in pot, Jefferson Airplane, and F Troop. His daughter Sarah (Jessica McManus) has a permanently bored expression to her. Larry's brother Arthur (Richard Kind) is just sitting around the toilet or on the couch coming up with complex math problems. Larry's wife Judith (Sari Lenick) asks for a divorce and a gett (a Jewish divorce decree I take it) so that she can marry their mutual friend, the widower Sy Ableman (Fred Melamed), whom she insists she has not been schtupping. Upon this hosts of situations a Korean student offers this nudnick a bribe to give him a passing grade. Amid all this moral crisis, Larry seeks help from three rabbis: the young Rabbi Scott (a most goy name for a rabbi), the head of the temple Rabbi Nachtner, and the senior rabbi, Rabbi Marshak. The first two give him a series of nonsense while the third receives no one. 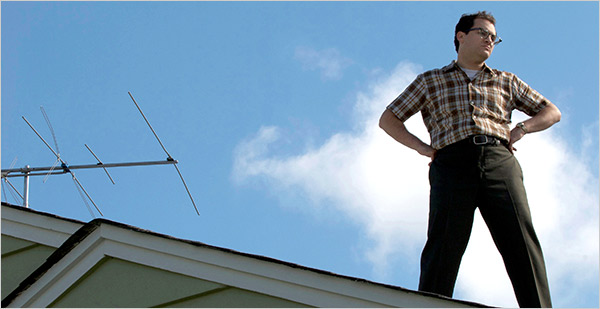 Really by this point in A Serious Man I wonder why we would want to care about this schmuck. Perhaps the reason I disliked A Serious Man is because I disliked Professor Gopkin. He is such a total pushover. When Judith and Sy (curiously, the serious man in the film) tell Larry that they think it's best that HE leave the house and go to a hotel, he does so, even though A.) it's HIS house, and B.) she's the one who wants to leave him.

What is wildly wrong with A Serious Man is that these "crises" that this yutz is facing aren't real crises at all and can be resolved quite easily. I'm suppose to believe that all these things happening to and around him are causing some Dark Night of the Soul (to use a good Catholic term), but really each situation can be handled without much help from a spiritual advisor. You throw your brother and wife out, get your kids to stop ordering albums via mail (he is that clueless that he is unaware that Danny has basically committed identity theft against him), forget about protecting a property line with the redneck/goy neighbors which is really a pointless argument and move on with your life. None of it was terribly dramatic or funny.

Take for example when Sy is killed in a car accident. Larry comes to his house to discover this, and the kids seem so disinterested in the fact that their father is not living at home, their mother is howling in agony, and that a man is dead. Their only concern is dinner and getting the antenna fixed so that Danny can watch F Troop (well, OK, I'll give you that not being able to watch F Troop might be a crisis). I suppose I was supposed to laugh hard at how funny all this was supposed to be, but since I didn't find it funny but annoying I couldn't laugh.

Worse, he is expected to pay for the funeral. Any normal man would have said, "Hell No! I ain't paying for my wife's lover's funeral. Maybe his cremation if I get to set the fire", but no, Little Larry, Schlemiel Par Excellance, meekly goes along with this and wonders why Hashem (God) would put him through all this.

IT'S BECAUSE YOU'RE A MORON! GROW UP AND GROW A SCHLONG YOU PUTZ!

Even if I could get through all this meshugas the Coens throw at me, I can't get over the ending, or rather, the lack of one. It would be nice of Joel & Ethan got around to actually FINISHING a movie. It's sad, but I'm beginning to HATE their films and am coming this close to making the fact that all these Coen-Heads worship the slop they throw out another Sign of the End of Western Civilization. Ultimately, A Serious Man may do something I never thought possible: it may make me think Jewish people are not funny.