Me And Orson Welles: A Review

ME AND ORSON WELLES


It Really Isn't All About Me...
Talent, I'm told, can excuse a lot: boorish behavior, raging egomania, excessive living. That may be the case, especially when it comes to a clear genius like Orson Welles. His talent goes without question, his personality another matter. Me and Orson Welles is a fanciful version of one creative output in his career, one that gives us an inside look at the brilliance and arrogance of this legendary artistic figure.

The Me in Me and Orson Welles is Richard (Zac Efron), a seventeen-year-old New Yorker who has dreams of the arts. He stands in awe of the Mercury Theater, where its star and director, one Orson Welles (Christian McKay) is about to stage his version of Julius Caesar, one set in Fascist Italy. Richard charms his way into being hired to be in Caesar by Welles, who calls him Junior, and Richard soon becomes part of a wild and chaotic world. He also meets Sonja (Claire Danes) the extremely efficient production assistant to Welles and his producing partner, John Houseman (Eddie Marsan) with dreams of stardom herself. In one week, Richard fulfills his dreams of being on Broadway, finds love, meets aspiring writer Greta (Zoe Kazan) and gets a first-hand look at the creative process of one of the great directors.

It's clear that Julius Caesar is a mess: the actors aren't rehearsed often, scenes cut and restored at whim, music cues shifted again and again and once more with confusing instructions. While Houseman does everything he can to keep the Mercury going when it's on the verge of collapse (morally, financially, structurally) Welles is driven from radio gig to radio gig in an ambulance to get him there on time (according to Welles, there is no law in New York that says you HAVE to be sick to ride in an ambulance). In spite of this, the Mercury Players stay with it although they constantly complain about the chaotic nature of the production. They are used to Welles' disorganized methods, partly because they know the results will be brilliant and partly because they might be suffering from an artistic form of Stockholm Syndrome. 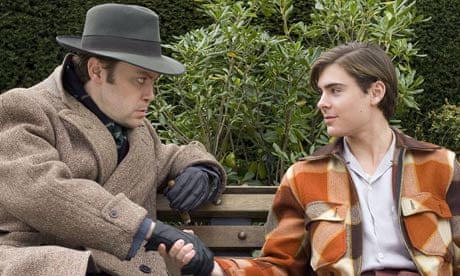 As one can gauge from the title, the film primarily revolves around "Me", i.e.. Richard. It is HIS story told through HIS eyes. Therefore, whatever criticism of the film that it has received about it not dealing with Orson Welles is frankly silly. It's not about Welles, it's about Me.

As Richard, Efron brings a natural charm to this guy. He's not a wide-eyed innocent but a bit of a schemer. He schemes his way into getting Welles' attention. He schemes his way into going out with Sonja. He successfully saves his job after causing an accident inside the theater. Efron certainly is making the transition from teen idol to maturing actor. Yes, he does sing in Me and Orson Welles, but it is relevant to the plot. My only complaint about Efron is an odd one: even though he's only 22 he looked too OLD to play a 17-year-old.

The truly great performance is McKay's. He sounded exactly like Welles, never sounding like a parody or like The Brain from Pinky and the Brain. His Welles is a raging egomaniac with the talent to back it up, a man who thrives on chaos and who will not compromise in his vision and not allow anyone to get in his way, either in his artistic or private life.

It isn't all raging though. There is a scene in the ambulance when he's being driven to another radio job when Welles lets his guard down slightly, to reveal memories of his past. It's at the radio show where Welles shows his enormous talent, adlibbing a beautiful speech unrehearsed and then going back on script as if everything were planned.

We also mustn't ignore other performances. Claire Danes is virtually unrecognizable as Sonja, who is cheerful on the exterior but who masks a burning, passionate desire to move ahead. She'll do anything to meet David O. Selznick, and yes, I mean anything. Whether she truly loves Richard or sees him as a distraction is open to conjecture. James Tupper, like Christian McKay's Orson Welles, is a dead ringer for Joseph Cotten--I was amazed at how much they look alike. His Cotten is one who loves the ladies and is devoted to his acting. Ben Chaplin made George Coulouris into a bit of a comic character, slightly contemptuous of all the proceedings but at the premiere having major, MAJOR stage fright to where he is on the verge of collapse. Leo Bill as Norman Lloyd makes his the comedy relief, and whether Lloyd in real life was we don't know.

Director Richard Linklater manages a good balance of comedy and romance with drama. The sneak preview of Julius Caesar is quite funny, showing all the effects of the unbalanced nature of the rehearsals. Once the actual premiere takes place, we get a strong idea of how the actual production would have been...and it would have been amazing. It's as if Welles managed to pull off one more miracle just in time to save his career. At times, you forget you are watching a film and get drawn into the play.

"How the hell do I top this?" Welles asks himself as the curtain draws on the premiere. We all think we know how. About the only major complaint I have is that at almost two hours it was a little long. Also, Marsan's Houseman didn't look or sound like the man he played. He doesn't come across as someone who could stand up to Welles. It's hard to imagine this man would later go on to do something Welles never could do: win an acting Oscar (if you've seen The Paper Chase, you will know Houseman as Professor Kingsfield).

At the end, Richard has had an amazing week, and we've had a delightful trip through the early career of a genius. It's by no means the Citizen Kane of Welles-related films, but even with a few flaws, it's a nice, small film about the creative process and how it brilliance and madness and ego can all collide. Perhaps there could have been a little less Me and a little more Orson Welles.