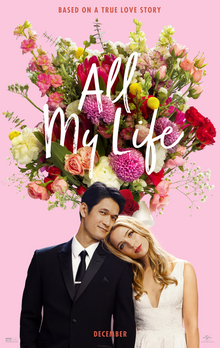 Sometimes, one sees a trailer and thinks "this is going to be so bad". Still, one goes in and thinks perhaps the trailer is what is bad but the movie itself could end up surprising you. I did not find such a thing with All My Life, a film that had its heart in the right place but was too choppy, rushed and surprisingly formulaic for a "true life" story.

Jennifer Carter (Jessica Rothe) is skipping along life when she spots Sol Chau (Harry Shum, Jr.) at a bar. She's with her two BFFs and he's with his two BFFs. While those other four are just there, Jennifer and Sol have not just a whirlwind romance but perhaps the greatest love story in the history of all humanity.

She kisses him on their first unofficial date: a jog through a park. They move in together. She encourages him to pursue his culinary gifts. He proposes through a flash mob to "their song": Oasis' Don't Look Back in Anger.

Then he is diagnosed with liver cancer. At first things look fine after surgery but one day Jennifer sees he bought a puppy (which they said they would if they got bad news). With that, it's a rush to get married, with all their hipster friends and random strangers helping pay for their $20,000 dream wedding. However, death stops for no one, and their time is brief (we're told in a postscript that Sol died 128 days after the wedding). Nevertheless, Jennifer knows it's now or never as she and their friends go on to a new restaurant that will serve his myriad of dishes: Now or Never. 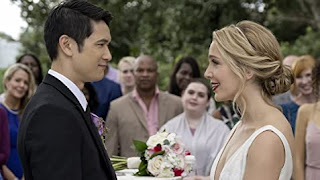 It is a terrible thing to say an "inspired by true events" movie can come across as hopeless fake, trite and almost insulting, yet here we have All My Life. I was reminded of another "doomed true-life love story" from this year: 2 Hearts. I don't know why 2020 brought us two separate "Young, seemingly healthy and incredibly beautiful man dies leaving the great love of his life alone" films, but there it is.

I might have been more forgiving of All My Life if it actually felt real. Again, it seems so wildly strange that All My Life felt fake despite Sol and Jennifer being real people. I put it down to Todd Rosenberg's screenplay, which is filled with awful dialogue that sounds, or attempts to sound, cutesy but comes across as cringey.

To try and motivate Sol to return to cooking, one of Jennifer's BFFs shouts "Yo Sol! Dust your apron off, bitch!" Sol attempts to explain to his apparent enemy at the kitchen where Sol whips up his brilliant dishes about his liver. Surprised to hear he had only part of it removed and that it's growing back, Sol says "The liver is like our one X-Men organ". Over and over the dialogue, the situations, the mannerisms of everyone feel so forced and fake, as if the film is unaware how humans actually speak or behave.

Even that could be tolerated if any of these people were remotely interesting. My eyes started rolling when Sol attempts to impress Jennifer with his cool eyes and claims of wit. "Wit me!" Jennifer dares him, and I think, "Wit me!"? For a brief moment, I thought she was requesting Sol sing I Wanna Dance With Somebody. 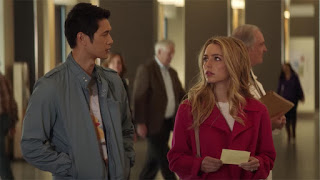 Everything in All My Life feels not quite sitcom-like but like a highlight reel for a television series season that you've not seen a complete episode of. So much of it felt rushed, as if we had to move on from one important moment to the next, with no chance for character or story development. We see a fellow cancer patient talk to them briefly, where Sol and Jennifer encourage him. The next time we see him is briefly as a wedding guest. All My Life has neither the interest or investment to make the bond between Sol and this random stranger real. I'm assuming he has a name, but I don't remember ever hearing it.

There's just a generic manner to All My Life, one where you almost expect various clichés to be ticked off: the cutesy couple's antics (They mirror their toothbrushing! They dance wildly to Hit Me With Your Best Shot!), the "big fight" (which curiously is the only time they appear to argue), the secret farewell video.

It's again so strange that despite this being a true story (to where we see footage of the real Solomon Chau and Jennifer Carter at their wedding) it simply does not feel real. Perhaps it was all the quips everyone was saying. Perhaps it was the flash mob proposal. Perhaps it was this odd veneer of optimism when our newlyweds splash around in a fountain. Perhaps it was how strangers all came together to offer all their services for free.

Yes, it may be all true, but as seen on screen it doesn't look real. 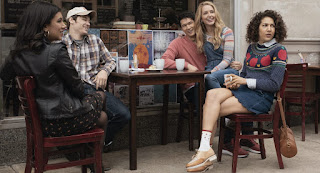 We get mention of Kyle (Kyle Allen) one of Sol's BFFs who has some kind of PTSD after his father died of cancer. Kyle himself mentions this when he arrives at the hospital at Sol's initial admittance. Dave (Jay Pharoah) also talks about Kyle's difficulty with seeing people with cancer, hence Kyle's initial decision to not attend the wedding.

How this actually relates to the story only Rosenberg and director Marc Meyers may know, but given that Kyle is almost a minor character the logical question is "why would the audience care?". It also makes one long for a film centered around Kyle or at least from Kyle's perspective. His PTSD struggles sound more interesting than Sol and Jennifer's story.

Acting-wise, I was not impressed with Shum, Jr. or Rothe. They seem pleasant enough and for a supposedly dying man Sol had a better body than almost every healthy man (one that the film showcased often). The other cast members aren't impactful enough to remember. Truth be told, I don't think I ever learned the characters' names, let alone bothered with their stories. It's an interesting thing when Mario Cantone comes across as the one trying for the most dramatic role as the wedding site coordinator.

All My Life does a disservice to the late Mr. Chau and his widow. Perhaps the respective families are pleased with the end results. I figure many audience members might be too. I found it all too cloying, insincere, forced, and sadly unbelievable, the worst thing for an "inspired by real events" film. The folk band playing Oasis seems more entertaining, and what can one say about a film where a Folk Oasis band sounds plausible.